From Infogalactic: the planetary knowledge core
Jump to: navigation, search
For other people of the same name, see Andrew Young (disambiguation).

Andrew Jackson Young, Jr. (born March 12, 1932) is an American politician, diplomat, activist, and pastor from Georgia. He has served as a Congressman from Georgia's 5th congressional district, the United States Ambassador to the United Nations, and Mayor of Atlanta. He served as President of the National Council of Churches USA, was a member of the Southern Christian Leadership Conference (SCLC) during the 1960s Civil Rights Movement, and was a supporter and friend of Dr. Martin Luther King, Jr.

Since leaving political office on January 2, 1990,[1] Young has founded or served in a large number of organizations founded on public policy, political lobbying and international relations, with a special focus on Africa.

Andrew Young was born March 12, 1932, in New Orleans, Louisiana, to Daisy Fuller Young, a school teacher, and Andrew Jackson Young, Sr., a dentist. Young's father hired a professional boxer to teach Andrew and his brother how to fight, so they could defend themselves. In an 1964 interview with author Robert Penn Warren for his book, Who Speaks for the Negro?, Young recalls the tensions of segregation in New Orleans, especially growing up in a fairly well-to-do household. He recalls his parents trying to "compensate for segregation" by providing for their children, yet at the same time being reluctant to help less wealthy black communities in the area.[2] Young graduated from Howard University and earned a divinity degree from Hartford Seminary in Hartford, Connecticut, in 1955.[3]

Young was appointed to serve as pastor of a church in Marion, Alabama. It was there in Marion that he met Jean Childs, who later became his wife. Young became interested in Mohandas Gandhi's concept of nonviolent resistance as a tactic for social change. He encouraged African Americans to register to vote in Alabama, and sometimes faced death threats while doing so. It was at this time that he became a friend and ally of Dr. Martin Luther King, Jr.

In 1960, he joined the Southern Christian Leadership Conference. No longer satisfied with his work in New York, Young moved to Atlanta, Georgia in 1961 upon the invitation of Dr. Bernard Lafayette, jr. and again worked on drives to register black voters. Young played a key role in the 1963 events in Birmingham, Alabama, serving as a mediator between the white and black communities as they negotiated against a background of protests.

In 1964, Young was named executive director of the Southern Christian Leadership Conference (SCLC), becoming, in that capacity, one of King's principal lieutenants. As a colleague and friend of Martin Luther King Jr., he was a strategist and negotiator during the Civil Rights Campaigns in Birmingham (1963), St. Augustine (1964), Selma (1965), and Atlanta (1966). He was jailed for his participation in civil rights demonstrations, both in Selma, Alabama, and in St. Augustine, Florida. The movement gained congressional passage of the 1964 Civil Rights Act and 1965 Voting Rights Act. Young was with King in Memphis, Tennessee, when King was assassinated in 1968.[5]

In 1970, Andrew Young ran as a Democrat for Congress from Georgia, but was unsuccessful. After his defeat, Rev. Fred C. Bennette, Jr., introduced him to Murray M. Silver, an Atlanta attorney, who served as his campaign finance chairman. Young ran again in 1972 and won. He later was re-elected in 1974 and in 1976. During his four-plus years in Congress, he was a member of the Congressional Black Caucus, and was involved in several debates regarding foreign relations, including the decision to stop supporting the Portuguese attempts to hold on to their colonies in southern Africa. Young also sat on the powerful Rules Committee and the Banking and Urban Development Committee. Young opposed the Vietnam War,[6] helped enact legislation that established the U.S. Institute for Peace, established the Chattahoochee River National Recreation Area and negotiated federal funds for MARTA and the Atlanta Highways.

Ambassador to the United Nations 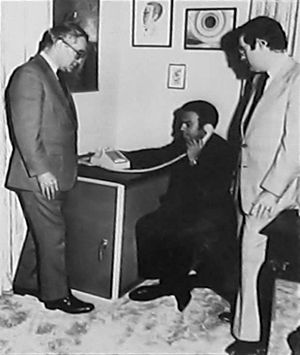 In 1977, President Jimmy Carter appointed Young to serve as the United States Ambassador to the United Nations. Young was the first African-American to hold the position. Atlanta Atlanta city councilman Wyche Fowler won the special election to fill Young's seat in Congress.

Although the US and the UN enacted an arms embargo against South Africa, as President Carter’s UN ambassador, Andrew Young vetoed economic sanctions.[7]

Young caused controversy when, during a July 1978 interview with French newspaper Le Matin de Paris, while discussing the Soviet Union and its treatment of political dissidents, he said, "We still have hundreds of people that I would categorize as political prisoners in our prisons," in reference to jailed civil-rights and anti-war protestors. In response, U.S. Representative Larry McDonald (D-GA) sponsored a resolution to impeach Young, but the measure failed 293 to 82. Carter referred to it in a press conference as an "unfortunate statement".[3]

In 1979, Young played a leading role in advancing a settlement in Rhodesia with Robert Mugabe and Joshua Nkomo, who had been two of the military leaders in the Rhodesian Bush War, which had ended in 1979. The settlement paved the way for Mugabe to take power as Prime Minister of the newly formed Republic of Zimbabwe. There had been a general election in 1979, bringing Bishop Abel Muzorewa to power as leader of the United African National Council leading to the short-lived country of Zimbabwe Rhodesia. Young refused to accept the election's results, and described the election as "neofascist", a sentiment echoed by United Nations Security Council Resolution 445 and 448. The situation was resolved the next year with the Lancaster House Agreement and the establishment of Zimbabwe.[3]

Young's favoring of Mugabe and Nkomo over Muzorewa and his predecessor and ally, Ian Smith, was, and remains, controversial. Many African-American activists, including Jesse Jackson and Coretta Scott King, supported the anti-colonialism represented by Mugabe and Nkomo.[3] However, it was opposed by others, including civil-rights leader Bayard Rustin, who argued that the 1979 election had been "free and fair",[8] as well as senators Harry F. Byrd, Jr. (I-VA) and Jesse Helms (R-NC). It was later criticized in 2005 by Gabriel Shumba, executive director of the anti-Mugabe Zimbabwe Exiles Forum.[9]

In July 1979, Young discovered that an upcoming report by the United Nations Division for Palestinian Rights called for the creation of a Palestinian State. Young wanted to delay the report because the Carter Administration was dealing with too many other issues at the time. He met with the UN representatives of several Arab countries to try to convince them the report should be delayed; they agreed in principle, but insisted that the Palestine Liberation Organization also had to agree. As a result, on July 20, Young met with Zehdi Terzi, the UN representative of the PLO, at the apartment of the UN Ambassador from Kuwait. On August 10, news of this meeting became public when Mossad leaked its illegally acquired transcript of the meeting first to Prime Minister Menachem Begin, and then through his office to Newsweek.[10] The meeting was highly controversial, since the United States had already promised Israel that it would not meet directly with the PLO until the PLO recognized Israel's right to exist.[3]

Young's UN ambassadorship ended on August 14.[3][11][12] Jimmy Carter denied any complicity in what was called the "Andy Young Affair", and asked Young to resign. Asked about the incident by Time soon afterward, Young stated, "It is very difficult to do the things that I think are in the interest of the country and maintain the standards of protocol and diplomacy... I really don't feel a bit sorry for anything that I have done."[13] Soon afterward, on the television show Meet the Press, he stated that Israel was "stubborn and intransigent."[11]

In 1981, after being urged by a number of people, including Coretta Scott King, the widow of Martin Luther King Jr., Young ran for mayor of Atlanta. He was elected later that year with 55% of the vote, succeeding Maynard Jackson. As mayor of Atlanta, he brought in $70 billion of new private investment.[15] He continued and expanded Maynard Jackson's programs for including minority and female-owned businesses in all city contracts. The Mayor's Task Force on Education established the Dream Jamboree College Fair that tripled the college scholarships given to Atlanta public school graduates. In 1985, he was involved in renovating the Atlanta Zoo, which was renamed Zoo Atlanta.[16] Young was re-elected as Mayor in 1985 with more than 80% of the vote. Atlanta hosted the 1988 Democratic National Convention during Young's tenure. He was prohibited by term limits from running for a third term. During his tenure, he talked about how he was "glad to be mayor of this city, where once the mayor had me thrown in jail".[17]

Race for Governor of Georgia, 1990

After leaving the Mayor's office in early 1990,[1] Young launched a bid for the Democratic nomination for Governor in 1990.[18] He ran in a primary that included three former or future Governors of Georgia: then-Lt. Governor Zell Miller, then-State Senator Roy Barnes, and former Governor Lester Maddox. The field also contained then-State Representative Lauren "Bubba" McDonald. The first poll put Young at 38 percent to Miller's 30 percent, 15 percent for Maddox and 10 percent for Barnes with McDonald trailing at 7 percent. Young campaigned hard but by the primary, with no central message, his campaign ran into trouble against the well-heeled and prepared Lt. Governor. Miller led the primary with 40 percent to Young's 29 percent and 21 percent for Barnes, Maddox got 7 percent and McDonald rounded out at 3 percent. Future U.S. Senator Johnny Isakson won the Republican nomination.[19] After Miller's stunning and broad-based primary win, Young's race floundered. Many think he failed in his effort by trying to garner support amongst rural, conservative white voters, rather than turning out his urban and African-American base. Also, Young never found an issue that roused supporters, unlike Miller, who won voters by championing a state lottery. Miller won the runoff, 2 to 1 and ended Young's Gubernatorial aspirations for good.[20]

Young has been a director of the Drum Major Institute for Public Policy, and is also the chairman of the board for the Global Initiative for the Advancement of Nutritional Therapy.[21] 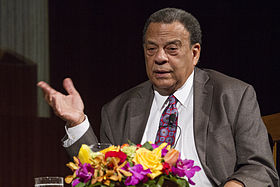 Andrew Young at the LBJ Presidential Library in 2013

In 2003, Young founded the Andrew Young Foundation, an organization meant to support and promote education, health, leadership and human rights in the United States, Africa and the Caribbean.[23]

From February to August 2006, Young served as the public spokesman for Working Families for Wal-Mart, an advocacy group for the retail chain Wal-Mart.[24] Young resigned from the position soon after a controversial interview with the Los Angeles Sentinel, in which, when asked about Wal-Mart hurting independent businesses, he replied, "You see those are the people who have been overcharging us, and they sold out and moved to Florida. I think they’ve ripped off our communities enough. First it was Jews, then it was Koreans and now it’s Arabs."[25]

In 2007, GoodWorks Productions released the documentary film Rwanda Rising,[26] about Rwanda's progress since the Rwandan genocide of 1994. Young also served as the film's narrator. Rwanda Rising premiered as the opening night selection at the Pan African Film Festival in Los Angeles in 2007.[27]

An edited version of Rwanda Rising served as the pilot episode of Andrew Young Presents,[28] a series of quarterly, hour-long specials airing on nationally syndicated television.[29]

On January 22, 2008, Young appeared as a guest on the television show The Colbert Report. Host Stephen Colbert invited Young to appear during the writers' strike, because, in 1969, Young and Colbert's father had worked together to mediate a hospital workers' strike.[30] Young made another appearance on The Colbert Report on November 5, 2008, to talk about the election of Barack Obama to the presidency.[31]

On January 9, 2015, Young gave the keynote address at Vanderbilt University's Martin Luther King, Jr. Commemoration Day. The theme was "Dismantling Segregation: Race, Poverty, and Privilege", and Young spoke about his experiences in Selma, stories of traveling with Dr. King, Jr., and his advice to the next generation of leaders.[32]

In September 1999, Young was diagnosed with prostate cancer which was successfully removed with surgery in January 2000.[35]

Young is played by Andre Holland in the 2014 film Selma.