Angel Mounds State Historic Site (12 VG 1)[3] is located on the Ohio River in Vanderburgh and Warrick counties in the southwestern corner of the U.S. state of Indiana. It is the site of a town constructed and occupied from 1100 CE to 1450 CE as one of the farthest northeastern expressions of the Mississippian culture. Just upriver of the confluence of the Green and Ohio rivers, it is located 8 miles (13 km) southeast of present-day Evansville. It is administered by the Indiana Department of Natural Resources, Division of Indiana State Museums and Historic Sites as one of 16 state museums and historic sites.

In 1964 this major complex of earthworks was designated a National Historic Landmark because of its significance. It is named after the Angel family who, from the mid-19th century to 1938, owned the property on which it is located.

For thousands of years, southwestern Indiana was home to successive cultures of Native Americans, who settled near the rivers and used them for travel and trade.

Beginning after 1000 CE, people of the widespread Mississippian culture built a town at this site, covering 100 acres (0.40 km2) and situated on a large, terraced mound near the river. Today, Angel Mounds State Historic Site is nationally recognized as one of the best-preserved prehistoric Native American sites in the United States. It was given National Historic Landmark status as part of this recognition. This site is the most northeastern of the Mississippian culture, which had sites throughout the river valleys of the Mississippi and its tributaries, such as the Ohio River, and ranging into North Carolina and as far south as Mississippi. Continuing excavations at the site reveal new elements of the complex society.

From 1100 CE to 1450 CE, people of the Middle Mississippian culture built and lived in a town on this site. They were known for building characteristic earthwork mounds, with shapes including platform, conical and ridgetop (as seen at Cahokia.) Angel Mounds was a chiefdom (the base of the chief) and the regional center of a large residential and agricultural community that extended for several miles around. They built a major earthwork, working with a variety of soils to create a stable mass. The platform mound held their central community. They traded with other chiefdoms and peoples along the Ohio and Mississippi rivers. This settlement was the largest-known town of its time in Indiana. Scholars believe the town may have contained as many as 1,000 inhabitants at its peak.[4]

Archeologists have used the distinctive pottery produced here and in other satellite communities in this section of the Ohio River valley to define the Angel phase. Archaeologists infer that the smaller communities were politically subordinate to the main site.

The people engaged in hunting and farming on the rich bottom lands of the Ohio River. In addition to the mounds they built for ceremonial and cosmological purposes, they constructed a defensive 12-foot (3.7 m)-high stockade made of wattle and daub, and punctuated with bastions. 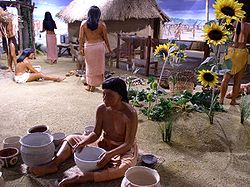 Pottery making in diorama at museum at Angel

The Mississippian people abandoned the site long before European contact. No one knows why the civilization declined, but scholars have speculated that an extended regional drought reduced the maize surpluses that had enabled the concentration of population. In addition, the people may have overhunted, as well as reducing forests by their consumption of wood for the stockade, houses and fires. Archaeologists theorize that with the collapse of the chiefdom by 1450, many of the Angel people had relocated downriver to the confluence of the Ohio and Wabash rivers. A new Late Mississippian cultural group subsequently emerged and have been named by archeologists as the Caborn-Welborn culture.[5]

Groups of Shawnee, Miami, and other historical tribes moved into this area from the eastern valley about 1650 CE, well after the Mississippians had abandoned the town at Angel Mounds. In the late eighteenth and nineteenth centuries, European-American settlers migrated to the area from the east, and settled to farm the land. Much like the Native Americans, they were attracted by the rich soil and temperate growing season. Among these settlers was Mathias Angel, who owned a farmstead on the site of Angel Mounds from 1852 until his death in 1899. His brothers owned adjacent farms, and the land remained in the Angel family until 1938. Angel Mounds State Historic Site is named after this family.

Preservation of the site

In 1938, the Indiana Historical Society purchased 480 acres of the Angel family property to protect the historically valuable site. Eli Lilly, a major business man and philanthropist, donated the money for the purchase. In 1946, the Historical Society gave the property to the State of Indiana. In 1965 it gave the archeological excavation rights to Indiana University, which had been conducting research there since 1945. The original purchase was augmented by Elda Clayton Herts' donation of 20 acres containing an early Woodland mound.

In the 1930s, WPA workers under the direction of the archeologist Glenn A. Black began scientific excavations during the Great Depression; the project was financed by President Franklin D. Roosevelt administration. Indiana University has continued archaeological research there since 1945. Preservation and archaeology excavations at Angel Mounds State Historic Site offer a glimpse into this highly developed culture. For 60 years, this living museum has told the story of a major pre-contact Native American culture on the Ohio River.

Archaeological work at Angel Mounds is conducted by the Glenn A. Black Laboratory of Archaeology, Indiana University. This institution was named after Glenn Albert Black, the archaeologist who conducted most of the excavations at Angel Mounds. He brought the site to national attention. His two-volume study (1967) of the site remains the definitive work. The university holds an annual archeology field school at the site during the summer, with a six-week program of training and work.[6]

In May 2006, researchers discovered a probable pottery-making workshop at the site.[8] This discovery revealed the artistic skills of the Mississippian culture people. Found during the season's excavation were pottery tools and masses of prepared, slightly fired clay pieces. It appeared to be a kind of production line, with the works awaiting finishing and firing as bowls, jars or figures.

The Mississippian farmers found this location by the Ohio River ideal for agricultural purposes, as annual spring floods replenished the nutrients in the soil and allowed cultivation of maize. The fertile soil enabled production of surplus crops, which the Mississippian people used for trade and to support a large enough population to develop artisan and craft specialties. The town, which overlooks the Ohio River, became the center of a regional chiefdom.

The people planned and constructed the town on the third terrace of an earthen mound, above the area flooded on a regular basis, yet close to the fields. A slough surrounds the town on three sides, making it a virtual island, with the river on the fourth side. When the site was first settled, the slough was deeper and the people kept it clear of brush and trees.[9] The community is on top of a terrace looking south across a narrow channel toward Three Mile Island (present-day Kentucky). The slough and island, which existed during the time Angel Mounds was inhabited, created a quiet backwater suitable for using canoes, collecting water, and bathing. Until near the end of the 19th century, the Ohio River was clear and potable.[9] 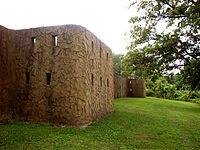 A section of reconstructed palisade at Angel Mounds

Archaeological excavation revealed that the town was surrounded by a stockade, with the Ohio River acting as a barrier on the south side. A gateway was placed to the east, about a fourth of the way around from where the eastern flank of the stockade meets the river. A second barrier, a type of picket fence, was set 14 feet (4.3 m) outside the stockade. It was designed to slow the attackers as they came into range.[9]

In 1972 the park reconstructed part of the stockade, based on archeological evidence. It stands 12' high and is made of wooden posts set 4 feet deep into a narrow trench. The posts are covered with wattle and daub, a loose weaving of sticks covered with a mud-and-grass plaster. The defensive bastions were also reconstructed, which had been built every 10 to 11 feet (3.4 m) and projected 11 to 12 feet (3.7 m) from the wall. The original people planned the bastions at distances which defenders could cover with arrows or lances, thus protecting the walls from a direct attack.[9]

View of Mound A, narrow end

Mound A, also called the Central Mound, is the highest in the complex. It contains two levels, with a conical mound in the southeast corner. The base mound is 644 feet (196 m) long and 415 feet (126 m) wide. Villagers carried 67,785 cubic yards of dirt in baskets from the chute along the south side of the village to create the mound. The lower terrace is 100 feet (30 m) by 100 feet (30 m) and is located on the south side of the mound. The upper terrace is 28 feet (8.5 m) above the surrounding area and is larger than the lower terrace. It is generally believed that the higher-class members of society would live on the highest mounds, while lower-class members inhabited smaller living spaces.[10]

The state constructed a modern stairway ascending the mound to protect it from erosion of pedestrian traffic. Archeological evidence suggests there may have been a log stairway in prehistoric times.

Based on reports from early European explorers in the southeastern United States, who encountered active Mississippian culture villages, this mound was likely the residence of the hereditary chief of the town and the surrounding communities. The regional center had associated settlements and hamlets within a 70-mile (110 km) radius of Angel Mounds.[9] 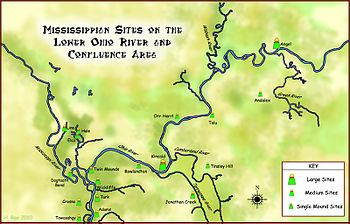 In the lower Ohio River valley in Illinois, Kentucky, and Indiana, the Mississippian-culture towns of Kincaid, Wickliffe, Tolu, and Angel Mounds have been grouped together into a "Kincaid Focus" set, due to similarities in pottery assemblages and site plans. Most striking are the comparisons between the Kincaid and Angel sites, which include analogous site plans, stylistic similarities in artifacts, and geographic proximity. These connections have led some scholars to hypothesize that the builders and residents were of the same society.[11] The 300-400 year span in which these types of artifacts and sites are found is called the "Angel Phase". It is divided into three subphases:

Rare painted and incised sherds of Mississippian culture pottery have been found at all four sites, ranging from less than one percent near Kincaid to about three or four percent of the assemblage at Wickliffe. Some common pottery styles found in these sites include: Angel Negative Painted, Kincaid Negative Painted, and Matthews Incised. This pottery is shell-tempered and ranges from the smoothed surface and coarser temper of Mississippi Ware to the more polished surface and finer temper of Bell Ware.[11]