From Infogalactic: the planetary knowledge core
Jump to: navigation, search
This article is about the religious devotion. For other uses, see Angelus (disambiguation). 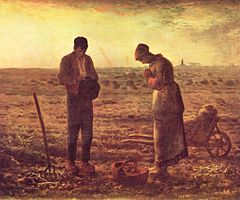 The Angelus (/ˈændʒələs/; Latin for "angel") is a Catholic devotion commemorating the Incarnation. As with many Catholic prayers, the name Angelus is derived from its incipit: Angelus Domini nuntiavit Mariæ ("... the Angel of the Lord declared unto Mary ...") and is practised by reciting as versicle and response three Biblical verses narrating the mystery; alternating with the prayer "Hail Mary". The Angelus exemplifies a species of prayers called the "prayer of the devotee".[1]

The devotion was traditionally recited in Roman Catholic churches, convents, and monasteries three times daily: 6:00 am, noon, and 6:00 pm (many churches still follow the devotion, and some practise it at home).[2] The devotion is also used by some Anglican and Lutheran churches.

The Angelus is usually accompanied by the ringing of the Angelus bell, which is a call to prayer and to spread good-will to everyone. The angel referred to in the prayer is Gabriel, a messenger of God who revealed to Mary that she would conceive a child to be born the Son of God. (Luke 1:26–38).

According to Herbert Thurston, "The history of the Angelus is by no means easy to trace with confidence, and it is well to distinguish in this matter between what is certain and what is in some measure conjectural."[3] This is an old devotion that was already well established 700 years ago. The Angelus originated with the 11th-century monastic custom of reciting three Hail Marys during the evening, or Compline, bell. The first written documentation stems from Italian Franciscan monk Sinigardi di Arezzo (died 1282).[4] Franciscan monasteries in Italy document the use in 1263 and 1295. The current form of the Angelus prayer is included in a Venetian Catechism from 1560. The older usages seem to have commemorated the resurrection of Christ in the morning, his suffering at noon and the annunciation in the evening.[4] In 1269, St Bonaventure urged the faithful to adopt the custom of the Franciscans of saying three Hail Marys as the Compline bell was rung.[5]

The Angelus is not identical to the "Noon Bell" ordered by Pope Calixtus III (1455–58) in 1456, who asked for a long midday bell ringing and prayer for protection against the Turkish invasions of his time. In his 1956 Apostolic Letter Dum Maerenti Animo about the persecution of the Catholic church in Eastern Europe and China, Pope Pius XII recalls the 500th anniversary of the "Noon Bell", a prayer crusade ordered by his predecessors against what they considered to be dangers from the East. He again asks the faithful throughout the World, to pray for the persecuted Church in the East during the mid-day Angelus.

The custom of reciting it in the morning apparently grew from the monastic custom of saying three Hail Marys while a bell rang at Prime. The noon time custom apparently arose from the noon time commemoration of the Passion on Fridays. The institution of the Angelus is by some ascribed to Pope Urban II, by some to Pope John XXII for the year 1317.[5] The triple recitation is ascribed to Louis XI of France, who in 1472 ordered it to be recited three times daily. The form of the prayer was standardized by the 17th century.[5]

The manner of ringing the Angelus—the triple stroke repeated three times, with a pause between each set of three (a total of nine strokes), sometimes followed by a longer peal as at curfew—seems to have been long established. The 15th-century constitutions of Syon monastery dictate that the lay brother "shall toll the Ave bell nine strokes at three times, keeping the space of one Pater and Ave between each three tollings".[6] The pattern of ringing on Irish radio and television consists of three groups of three peals, each group separated by a pause, followed by a group of nine peals, for a total of eighteen rings.[7][8]

In his Apostolic Letter Marialis Cultus (1974), Pope Paul VI encouraged the praying of the Angelus considering it important and a reminder to faithful Catholics of the Paschal Mystery, in which recalling the incarnation of the son of God they pray that they may be led "through his passion and cross to the glory of his resurrection."[9]

It is common practice that during the recital of the Angelus prayer, for the lines "And the Word was made flesh/And dwelt among us", those reciting the prayer bow or genuflect. Either of these actions draws attention to the moment of the Incarnation of Christ into human flesh. During Paschaltide, the Marian antiphon Regina Cœli with versicle and prayer, substitutes the Angelus.[3]

In most Franciscan and contemplative monasteries, the Angelus continues to be prayed three times a day.

In Germany, particular dioceses and their radio stations ring the Angelus. In addition, Roman Catholic churches (and some Protestant ones) ring the Angelus bell thrice daily.[6]

In Ireland, the Angelus is currently broadcast every night before the main evening news at 6:00 pm on the main national TV channel, RTÉ One, and on the broadcaster's sister radio station, Radio 1, at noon and 6:00 pm; however, the station announced in October 2015 that this would cease.[10] In 2015, in advertising for a commission to independent film makers to produce versions of the Angelus, RTÉ described the playing of the Angelus as follows:[7]

"The daily "Angelus" broadcast on RTÉ One is by far RTÉ's longest-running and most watched Religious Programme. It's also, possibly, the most controversial. For some, the reflective slot, which airs for just one minute in every 1440 per day and on only one RTÉ TV channel, is as much part of Ireland's unique cultural identity as the harp on your passport; for others, it's an anachronism – a reminder of more homogenously and observantly Christian times."

RTÉ Audience Research finds that a clear majority of Irish viewers still favours keeping the "Angelus" broadcasts, chimes and all. Its appeal is summarised in one audience member as follows as, "To the person of faith, it's a moment of grace; to the person without faith, it's a moment of peace. What's not to like?" The station also notes that the prayer itself is never broadcast.

In the Philippines, radio and television stations run by the Catholic Church and some religious orders broadcast the Angelus at 6:00 am, noon, and 6:00 pm. The devotion is also broadcast over the public address system at noon and 6:00 pm in some shopping malls, and in many Catholic educational institutions mostly at noon on schooldays (some only ring bells at 6:00 pm).

In the United States and Canada, some Catholic radio stations run by laity broadcast the Angelus daily. American Trappist monasteries and convents often combine the Angelus with midday prayers or Vespers and pray them together in the Church. At the University of Portland, the bell tower near the center of campus tolls the Angelus at noon and 6:00 pm. 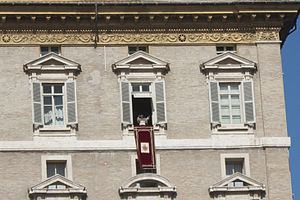 Pope Benedict XVI during the Angelus Address in Vatican City, 2012.

In Italy since Pope John XXIII, the Pope delivers an address every Sunday at noon. Known informally as the Angelus Address ("Regina Cœli Address" during Eastertide), the short ritual is broadcast by public television (Rai Uno) and Eurovision Network. At the end of the Address, the Pope leads recitation of the Angelus or Regina Cœli, and concludes with a blessing upon the crowds in Saint Peter's Square and televiewers.

The Angelus is found in two popular twentieth-century Anglo-Catholic manuals of devotion. The Practice of Religion: A Short Manual of Instructions and Devotions by Archibald Campbell Knowles, first published in 1908, refers to the Angelus as "the memorial of the Incarnation" and notes that "In the Mystery of the Incarnation we worship and adore Our Lord as God of God, we honour and reverence Saint Mary as 'Blessed among women.' In honouring Mary, the Instrument of the Incarnation, we really honour Christ, Who became Incarnate."[11]

The Angelus is also found in Saint Augustine's Prayer Book: A Book of Devotion for members of the Episcopal Church, first published in 1947 (Revised Edition, 1967).[12]

In many Anglo-Catholic churches of the Anglican Communion, there is a strong tradition of singing the Angelus,[13] particularly before or after the Sunday parish mass.[14][15] The practice has spread more commonly into Roman Catholicism through the Ordinariate jurisdictions for former Anglicans.[16]

℣. The Angel of the LORD declared unto Mary,
℟. And she conceived of the Holy Spirit.

℣. Behold the handmaid of the LORD.
℟. Be it done unto me according to thy word.

℣. And the Word was made flesh.
℟. And dwelt among us.

℣. Pray for us, O Holy Mother of God.
℟. That we might be made worthy of the promises of Christ.

Let us pray,
Pour forth, we beseech Thee, LORD, Thy grace into our hearts; that, we, to whom the Incarnation of Christ, Thy Son, was made known by the message of an angel, may by His Passion and Cross be brought to the glory of His Resurrection. Through the same Christ our Lord.
℟. Amen.[17]

The poem "The Irish Unionist's Farewell" by Sir John Betjeman has this line "-and the Angelus is calling".

Francis Bret Harte wrote "The Angelus" referencing the twilight tolling of the Angelus bell at a Californian mission.[18]

In "The Angelus", Donegal poet Elizabeth Shane portrays an elderly couple cutting peat reminiscent of the scene in Millet's painting.[20]

In a poem set to music circa 1919, The Foggy Dew, Canon Charles O'Neill (1887–1963) memorialized the Easter Rising also known as the Easter Rebellion of 1916. One of the lines reads: "But the Angelus Bell o'er the Liffey's swell rang out in the foggy dew".

The Angelus, in all its stages of development, was closely associated with the ringing of a church bell. The bell is still rung in some English country churches and has often been mistaken for, and alleged to be a remnant of, the curfew bell. The Angelus is replaced by Regina Coeli during Eastertide, and is not recited on Good Friday or Holy Saturday.

The ringing of the Angelus in the 14th century and even in the 13th century must have been very general.[21] The number of bells belonging to these two centuries that still survive is relatively low, but a considerable proportion bear inscriptions that suggest that they were originally intended to serve as Ave bells. Many bear the words Ave Maria; or, as in the case of a bell at Helfta, near Eisleben, in Germany, dated 1234, the whole sentence: Ave Maria, gratia plena, Dominus tecum.[22]

Bells inscribed with Ave Maria are also numerous in England, but there the Angelus bells seem in a very large number of instances to have been dedicated to St Gabriel, the angel mentioned in the prayer (Luke 1:26–27). In the Diocese of Lincoln alone there are nineteen surviving medieval bells bearing the name of Gabriel, while only six bear the name of Michael, a much more popular patron in other respects.