He was an heir of the noble families of Montmorency and of Laval, styled Marquis de Laval then Prince de Montmorency-Laval before succeeding to his father's titles in 1817. He was additionally created a grandee of Spain and duque de San Fernando Luis.

Adrien de Montmorency-Laval was a French army officer, before serving as French foreign minister and as an ambassador during the Bourbon Restoration.[1]

Born in 1768 while his formidable great-grandfather, Marshal Guy-André-Pierre de Montmorency, the 1st duke was alive, Adrien was sent to be raised under the tuition of his uncle Cardinal Louis-Joseph de Montmorency-Laval, Prince-Bishop of Metz and Grand Almoner of France in preparation for taking holy orders.

Shortly after starting at the seminary of the Saint-Sulpice in Paris, his elder brother Guy de Montmorency, marquis de Laval, died unexpectedly in 1786; he had married Pauline-Renée-Sophie de Voyer de Paulmy d'Argenson in 1784. His brother's death, prompted him to leave church training and participate in court life at Versailles.

The Duke and his wife had three children:[1]

Upon the outbreak of the French Revolution, after locating remaining family members in Paris, Adrien de Laval fled to England. As a French émigré in London, the marquis became friendly with the Prince of Wales and his circle.

During the revolutionary wars his father appointed him as aide-de-camp and despatched him to Italy as a captain in the Montmorency Regiment being stationed at Rome. After the ban on émigrés was lifted in 1800 he returned to France. Adrien de Laval was one of the first to congratulate Louis XVIII at Calais in 1814, who promoted him maréchal de camp (major-general), according him the style of Prince de Montmorency-Laval; he succeeded to his father's dukedom in 1817.

On August 15, 1814, he was appointed French ambassador to Spain. There he came into conflict with Ceballos. But on receiving news of the return of Napoleon from Elba, a reconciliation was effected and Montmorency-Laval agreed to stay in Madrid, contrary to instructions from the French government. He successfully managed the somewhat tense relations between the Spanish Borbóns and the newly restored French Bourbons, being honoured in 1815 as a knight of the Golden Fleece and duque de San Fernando Luis and the rank of grandee. His next ambassadorial posting was to Rome where he arrived just before the end of Pius VII's reign and was present during the conclave to choose his successor as pope; he joined forces with Austria in support of Cardinal Castiglioni's candidacy. However, Cardinal Annibale della Genga was elected as Leo XII.

On 20 March 1828, the Duc de Laval was appointed French ambassador to Austria. His name was also mooted as a candidate to be king of Greece, but he twice refused King Charles X's proposals.

He was then posted as Ambassador to the Court of St James's, returning to Paris just before Charles X's exile. At Talleyrand's request, he dealt with unpleasant issues in London caused by his relatives, Louis, duc de Valençay and his father Edmond, duca di Dino, who had become addicted to gambling.

Declining to swear allegiance to King Louis-Philippe, the Duke and Duchess retired to the chateau de Montigny, where they received visitors, including Talleyrand. The Duke died on 16 June 1837 and, having been predeceased by his son at Naples in 1819, his youngest brother Eugène succeeded to his French titles before they became extinct, whereas his Spanish ducado and grandeza devolved upon his elder daughter and her descendants. 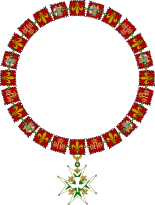 Collar of the Saint-Esprit