Girodet was born at Montargis. He lost his parents in early youth and the care of his inheritance and education fell to his guardian, M. Trioson, "medecin-de-mesdames," by whom he was in later life adopted and whose surname he took in 1812.[1] He started in school by studying architecture and pursuing a military career.[2] He later changed to the study of painting under a painter named Luquin, before entering the school of David. At the age of twenty-two he successfully competed for the Prix de Rome making a name for himself for his painting of the Story of Joseph and his Brethren.[2][3] From 1789 to 1793 he lived in Italy and while in Rome he painted his Hippocrate refusant les presents d'Artaxerxes and Endymion-dormant (presently held in the Louvre), work which was praised at the Salon of 1793.

Back in France, Girodet painted many portraits, including some of the members of the Napoléon family. In 1806, he exhibited "Scène de déluge" (Louvre), to which (in competition with the "Sabines" of David) was awarded the decennial prize.[1] This success was followed up in 1808 by the production of the "Reddition de Vienne" and "Atala au Tombeau" a work which went far to deserve its immense popularity, by a happy choice of subject, and remarkable freedom from the theatricality of Girodet's usual manner, which, however, soon returned again in his "La Révolte du Caire" (1810). 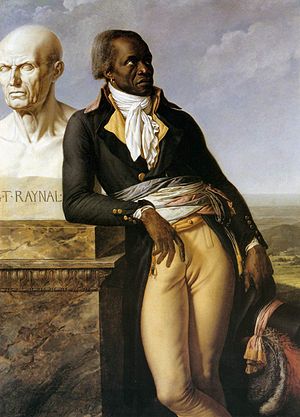 His powers now began to fail, and his habit of working at night and other excesses told upon his constitution; in the Salon of 1812 he exhibited only a "Tête de Vierge"; in 1819 "Pygmalion et Galatée" showed a still further decline of strength; and in 1824, the year in which he produced his portraits of Cathelineau and Bonchamps, Girodet died on December 9 in Paris. A sale of his effects was made after his death, and some of his drawings realized enormous prices.[1]

Girodet produced a vast quantity of illustrations, amongst which may be cited those for the Didot Virgil (1798) and for the Louvre Racine (1801–1805). Fifty-four of his designs for Anacreon were engraved by M. Châtillon. Girodet wasted much time on literary composition, his poem Le Peintre (a string of commonplaces), together with poor imitations of classical poets, and essays on Le Genie and La Grâce, were published after his death (1829), with a biographical notice by his friend M. Coupin de la Couperie; and M. Delecluze, in his Louis David et son temps, has also a brief life of Girodet.[1]

Girodet: Romantic Rebel - The Art Institute of Chicago (2006), was the first retrospective in the United States devoted to the works of Anne-Louis Girodet de Roussy-Trioson. The exhibition assembled more than 100 seminal works (about 60 paintings and 40 drawings) that demonstrated the artist’s range as a painter as well as a draftsman.[5]

View on the works

The peculiarities which mark Girodet's position as the herald of the romantic movement are already evident in his "Endymion." He has a decided inclination to the ancient style, and the fullness of statuary is very perceptible in his works, but they are also distinguished for life, nature and beauty. His drawing is correct, and of great precision; his coloring is rich, transparent and harmonious. He works with equal care and genius. He loves to produce effect by strong lights but they are in unison with the spirit of the pieces.[6]

The same incongruity marks Girodet's "Danae" and his "Quatre Saisons," executed for the king of Spain (repeated for Compiègne), and shows itself to a ludicrous extent in his "Fingal" St. Petersburg, Leuchtenberg collection), executed for Napoleon in 1802. This work unites the defects of the classic and romantic schools, for Girodet's imagination ardently and exclusively pursued the ideas excited by varied reading both of classic and of modern literature, and the impressions which he received from the external world afforded him little stimulus or check; he consequently retained the mannerisms of his master's practice whilst rejecting all restraint on choice of subject.