Anouk Teeuwe (Dutch pronunciation: [aːˈnuk ˈteːuʋə]; born 8 April 1975), professionally known by the mononym Anouk, is a Dutch singer-songwriter and record producer. After her breakthrough in 1997 with the single "Nobody's Wife", she had numerous hit singles in the Dutch and Belgian charts, such as "R U Kiddin' Me", "Michel", "Girl", "Lost", "Modern World", "Three Days in a Row", and "Woman".

Anouk has released nine studio albums to date, the most recent one being Paradise and Back Again, released on 24 November 2014. She represented the Netherlands at the Eurovision Song Contest 2013 in Malmö, Sweden, with the song "Birds". Her song made it to the final – the first since 2004 for the Netherlands; and finished 9th with 114 points.[1]

Anouk Teeuwe was born on 8 April 1975, in The Hague, Netherlands. As a teenager, she experimented with drugs and ended up living in several care homes after she ran away from her family at the age of fourteen.

Anouk's interest in music was triggered through her mother, who was a blues singer. Anouk gave her first performance at fifteen and sang at weddings and parties with the band Shotgun Wedding. She started attending the Rotterdam Conservatory in 1994 but dropped out two years later. In the same period, her then-husband and manager Edwin Jansen introduced Anouk to Golden Earring frontman Barry Hay. Hay believed her to have talent and offered to write some songs for her. One of those songs was "Mood Indigo"; written in collaboration with fellow Golden Earring member George Kooymans.

After she met Bart van Veen, her co-writer, the pair wrote a few songs. On 5 September 1997, she released her second single, "Nobody's Wife", which remained at the top of the Dutch music charts for a number of weeks and was also a hit in Norway and Sweden. Her debut album Together Alone turned out to be a huge success. In 1998, Anouk won two awards from Dutch music channel TMF in addition to an Edison Award. During the summer, she played at various festivals.

Her second album Urban Solitude was released in November 1999, and included the single "R U Kiddin' Me". This song reached the Dutch Top 100. Shortly afterwards, Anouk went to the United States to pursue a record deal. Negotiations with her American label (Sony) ended badly, causing her to return to the Netherlands without a deal. She released a new song, "Don't", and began touring the Netherlands in February 2001.

In March 2001, she released another album, Lost Tracks, which contained acoustic versions and B-sides from older songs, and various duets with K's Choice singer Sarah Bettens and The Anonymous Mis. She was awarded the Popprijs award in 2001.

In November 2002, the album Graduated Fool was released. This is the heaviest rock album in Anouk's career so far. Anouk received a Golden Harp in 2003. The following full length release is called Hotel New York (2004) and yielded a total of four singles: "Girl", "Lost", "Jerusalem" and "One Word". 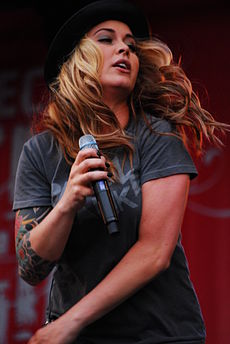 Anouk at Festival Mundial in 2008

In 2007, Anouk released Who's Your Momma, recorded with producer Glen Ballard. The first single, "Good God" was a success,[3] and became a playable song in the video game Guitar Hero World Tour in 2008.[4]

In 2009 she released her album For Bitter or Worse. The song "Three Days in a Row" reached the first place in the Dutch charts.

Anouk's album To Get Her Together was released in the Netherlands in May 2011. On 28 February 2011 Anouk placed one of the new tracks on YouTube named "Killer Bee". The first single of the album is called "Down & Dirty" and came out in April. On 27 June, Anouk released her single "I'm a Cliché". On 17 September 2011 "Save Me" was released as third single from the album. The fourth single is "What Have You Done". Anouk performed at the GelreDome in Arnhem for her To Get Her Together Tour on 8 and 11 March 2012.

Anouk first revealed taking part in the festival on Facebook on 17 October 2012, after negotiations with broadcaster TROS. Her song was officially revealed on 11 March 2013. Anouk performed "Birds" in the first semi-final on 14 May 2013, where she progressed to the final on 18 May 2013. 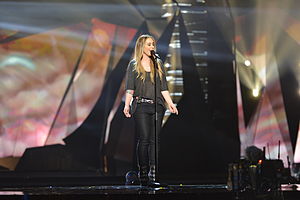 Anouk at the dress rehearsal of the Eurovision Song Contest 2013

Anouk reached the 9th place at the Eurovision Song Contest 2013 in Malmö, Sweden on 18 May 2013 with her song "Birds".[5] The Dutch broadly perceived her result to be a major achievement, as it was the best ranking for the Netherlands in 14 years and the first time in 9 years that any Dutch artist even made it to the finals.[6] Anouk wrote the 2015 Dutch entry called "Walk Along", performed by Trijntje Oosterhuis along with Swedish songwriter Tobias Karlsson.[7]

In 2015, Anouk was a coach on the sixth season of the reality singing competition show The Voice of Holland.

Anouk's musical style has been described as a combination of Joan Osborne, Melissa Etheridge and Alanis Morissette.[8] She is known for explosive rock songs like "Nobody's Wife" and "R U Kiddin' Me", but has also made small and fragile songs like "Lost" and "Michel". In addition to her pop/rock sound she also experiments with soul, funk and hip hop.

Anouk was married to her manager Edwin Jansen until 1998.

In 2010 Anouk gave birth to her fourth child, a son named Jesiah Dox. The father is Dutch rapper Robert Coenen, best known by his stage name Unorthadox, who was Anouk's latest boyfriend with whom she broke up.

In March 2014, Anouk announced that she was pregnant with her fifth child. Anouk revealed the father is Seraino Dalgliesh.[10] Her son Sion Jethro was born in June 2014.[11]

In januari 2016 Anouk announced to be pregnant of her 6th child.[12] Father presumed to be current boyfriend Dominique

In 2006, Dutch singer Marco Borsato joined Anouk in announcing their withdrawal from future TMF Awards-nominations. "Every year the same faces can get boring".