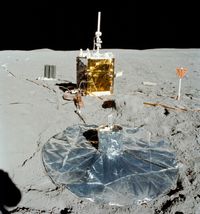 ALSEP of the Apollo 16 mission

The Apollo Lunar Surface Experiments Package (ALSEP) comprised a set of scientific instruments placed by the astronauts at the landing site of each of the five Apollo missions to land on the Moon following Apollo 11 (Apollos 12, 14, 15, 16, and 17). Apollo 11 left a smaller package called the Early Apollo Scientific Experiments Package, or EASEP.

The instrumentation and experiments that would comprise ALSEP were decided in February 1966. Specifically, the experiments, institutions responsible, and principal investigators and coinvestigators were:[1]

The ALSEP was built and tested by Bendix Aerospace in Ann Arbor, Michigan. The instruments were designed to run autonomously after the astronauts left and to make long term studies of the lunar environment. They were arrayed around a Central Station which supplied power generated by a radioisotope thermoelectric generator (RTG) to run the instruments and communications so data collected by the experiments could be relayed to Earth. Thermal control was achieved by passive elements (insulation, reflectors, thermal coatings) as well as power dissipation resistors and heaters. Data collected from the instruments were converted into a telemetry format and transmitted to Earth.

Each ALSEP station had some common elements.

Each mission had a different array of experiments. 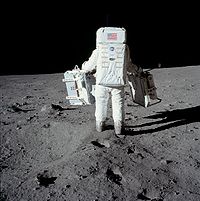 On Apollo 11, Buzz Aldrin simply carried the EASEP to the deployment site by using handles. This is different from the carrybar used on later missions.

Because of the risk of an early abort on the Moon, geologists persuaded NASA to permit only experiments that could be set up or completed in 10 minutes.[6] As a result, Apollo 11 did not leave a full ALSEP package, but left a simpler version called the Early Apollo Surface Experiments Package (EASEP). Since there was only one 2 hour 40 minute EVA planned, the crew would not have enough time to deploy a full ALSEP, which usually took one to two hours to deploy. Both packages were stored in the LM's SEQ bay.

Engineers designed the EASEP to deploy with one squeeze handle, and the Laser Ranging Retro Reflector (LRRR) also deployed within ten minutes. Despite the simpler design, the seismometer was sensitive enough to detect Neil Armstrong's movements during sleep.[6] 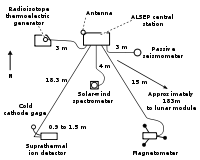 A recording of the Apollo 13 S-IVB's impact on the lunar surface as detected by the Apollo 12 Passive Seismic Experiment.

Because of the aborted landing, none of the experiments were deployed. However, the Apollo 13 S-IVB stage was deliberately crashed on the Moon to provide a signal for the Apollo 12 PSE. 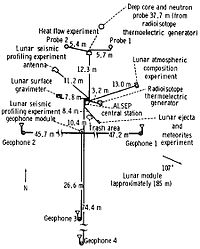 The ALSEP system and instruments were controlled by commands from Earth. The stations ran from deployment until they were turned off on 30 September 1977 due primarily to budgetary considerations. Additionally, by 1977 the power packs could not run both the transmitter and any other instrument, and the ALSEP control room was needed for the attempt to reactivate Skylab. ALSEP systems are visible in several images taken by the Lunar Reconnaissance Orbiter during its orbits over Apollo landing sites.