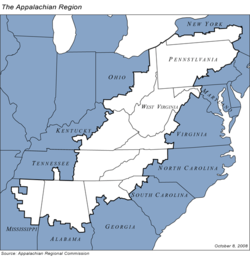 The Appalachian Regional Commission (ARC) is a United States federal-state partnership that works with the people of Appalachia to create opportunities for self-sustaining economic development and improved quality of life. The Commission is a partnership of 420 counties or county-equivalents in 13 states (including eight independent cities in Virginia, where state law makes cities administratively separate from counties),[1] and the governors of West Virginia, Alabama, Georgia, Kentucky, Maryland, Mississippi, New York, North Carolina, Ohio, Pennsylvania, South Carolina, Tennessee, and Virginia, and a presidential appointee representing the federal government. It is headquartered in Washington, D.C.

The current Federal Co-Chair is Earl F. Gohl, who was appointed by President Barack Obama in 2010. The current States' Co-Chair is Alabama Governor Robert Bentley. Grassroots participation is provided through 73 local development districts, which are multi-county organizations with boards made up of elected officials, businesspeople, and other local leaders. The mission of ARC is to be a strategic partner and advocate for sustainable community and economic development in Appalachia. The ARC is a planning, research, advocacy and funding organization; it does not have any governing powers within the region.

Beginning in about 1960, the Council of Appalachian Governors, a group of the ten governors of the Appalachian states of Alabama, Georgia, Kentucky, Maryland, North Carolina, South Carolina, Pennsylvania, Tennessee, Virginia, and West Virginia, united to seek federal government assistance for the mountainous portions of their states, which lagged behind the rest of the United States in income, education, health care, and transportation. During the 1960 Presidential campaign, candidate John F. Kennedy met with the governors to hear their concerns and observed living conditions in West Virginia that convinced him of the need for federal assistance to address the region's problems.[2]

Another catalyst that helped lead to the creation of the ARC was the 1962 book Night Comes to the Cumberlands: A Biography of a Depressed Area by Harry M. Caudill on the poverty and history of the Cumberland area of Appalachia, predominantly in Kentucky. This book brought the situation in Appalachia to national attention.[3]

In 1963 President Kennedy formed the President's Appalachian Regional Commission to assist in advancing legislation to bring federal dollars to Appalachia. This legislation, the Appalachian Redevelopment Act, was enacted by Congress in 1965, creating the ARC as a federal agency.[2] It was signed into law by President Lyndon B. Johnson on March 9, 1965.[4]

The ARC's geographic range of coverage was defined broadly to cover as many economically underdeveloped areas as possible; as a result, it extends beyond the geographic area usually thought of as "Appalachia". For instance, parts of Mississippi were included in the commission because of similar problems with unemployment and poverty. More recently, the Youngstown, Ohio region was declared part of Appalachia by the ARC due to the collapse of the steel industry in the region in the early 1980s and the continuing unemployment problems in the region since, though aside from Columbiana County, Ohio the Youngstown DMA isn't traditionally or culturally considered part of the region. The ARC's wide scope also grew out of the "pork barrel" phenomenon as politicians from outside the traditional Appalachian area saw a new way to bring home federal money to their areas.[5]

ARC undertakes projects that address the four goals identified by ARC in its strategic plan:

Each year Congress appropriates funds, which ARC allocates among its member states. The Appalachian governors submit to ARC their state spending plans for the year, which include lists of projects they recommend for funding. The spending plans are reviewed and approved at a meeting of all the governors and the federal co-chair.

The next step is approval of individual projects by the ARC federal co-chair. After the states submit project applications to ARC, each project is reviewed by ARC program analysts. The process is completed when the federal co-chair reviews a project and formally approves it.