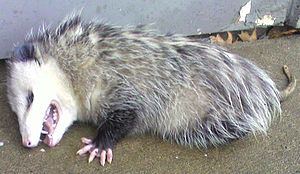 Apparent death, colloquially known as playing dead, feigning death, or playing possum, is a behavior in which an animal takes on the appearance of being dead. This form of animal deception is an adaptive behavior also known as tonic immobility or thanatosis. Apparent death can be used as a defense mechanism or as a form of aggressive mimicry, and occurs in a wide range of animals.

When induced by humans, the state is sometimes colloquially known as animal hypnosis. According to Gilman et al.,[1] the investigation of "animal hypnosis" dates back to the year 1646 in a report by Athanasius Kircher.

The term "thanatopsis" (Greek: thanatos "death" + opsis "a sight, view") may be more correct than "thanatosis" which simply refers to death. The addition of the term "-opsis" lends the meaning that the animal only appears to be dead but is in fact alive.[citation needed] 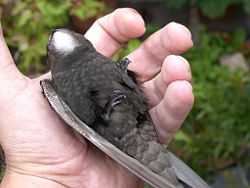 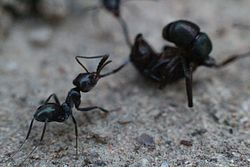 Tonic immobility (TI) is a behaviour in which some animals become apparently temporarily paralysed and unresponsive to external stimuli. In most cases, this occurs in response to an extreme threat such as being captured by a (perceived) predator, although in sharks exhibiting the behaviour, some scientists relate it to mating, arguing that biting by the male immobilizes the female and thus facilitates mating.[2]

Some sharks can be induced into tonic immobility by inverting them and restraining them by hand, e.g. dogfish sharks, lemon sharks and reef sharks.[disambiguation needed][2][3][4][5] For tiger sharks (measuring 3–4 metres in length), tonic immobility can be induced by humans placing their hands lightly on the sides of the animal's snout in the area surrounding the eyes. During tonic immobility in sharks, the dorsal fins straighten, and both breathing and muscle contractions become more steady and relaxed. This state persists for an average of 15 minutes before recovery and the resumption of active behaviour. Scientists have exploited this response to study shark behaviour; chemical shark repellent has been studied to test its effectiveness and to more accurately estimate dose sizes, concentrations and time to recovery.[6] Tonic immobility can also be used as a form of mild anesthesia during experimental manipulations of sharks.[7][8]

Scientists also believe that tonic immobility can be a stressful experience for sharks. By measuring blood chemistry samples when the shark is immobile, it has been suggested that tonic immobility can actually put stress on the shark, and reduce breathing efficiency. However, it has also been proposed that sharks have a series of compensatory mechanisms that work to increase respiration rates and lower stress.[9]

Goldfish, trout, rudd, tench, brown bullhead, medaka, paradise fish, and topminnow have been reported to go limp when they are restrained on their backs.[10] Oscars seem to go into shock when they are stressed (when their aquarium is being cleaned, for example): they lie on their side, stop moving their fins, start to breathe more slowly and deeply, and lose colour.[11] A similar behavior has been reported for convict tangs in the field.[12]

In 1997, it was reported that around the Farallon Islands off the coast of California, a female orca was seen apparently inducing tonic immobility in a great white shark. The orca held the shark upside down to induce TI and kept the shark still for 15 minutes, causing it to suffocate to death.[citation needed] This was the first recorded case of predation on a great white shark in the wild by a species other than humans.

Another case of orcas apparently inducing TI has been observed with stingrays in New Zealand. In this context, the orcas turn themselves upside down before attacking, trap the stingrays in their mouths then quickly right themselves. This inverts the stingray thereby inducing TI, rendering the fish helpless and an easy meal.[13][full citation needed]

Tonic immobility can be reliably induced in the lizard Iguana iguana by a combination of inversion, restraint and moderate pressure. During TI, there are obvious changes in respiration including a decline in respiration rate, the rhythm becomes sporadic, and the magnitude irregular. The prolonged period of TI does not seem to be consistent with the fear hypothesis, but could be the result of a period of cortical depression due to increased brain stem activity.[14]

Tonic immobility can also be induced in the Carolina anole. The characteristics of this TI vary as a function of the duration and condition of captivity.[15]

In rabbits, the physiological and behavioral responses to induced tonic immobility have been found to be indicative of a fear-motivated stress state. Tonic immobility is considered a last attempt for prey to escape being eaten by a predator. A 2006 study concluded that rabbits show symptoms that are in line with being stressed after being in a tonic immobility state, such as a faster heart rate and breathing.[16] This confirms that the promotion of tonic immobility to increase a bond between rabbits and their owners – holding the rabbit on its back and thinking the rabbits enjoy it – is misplaced; however, the researchers concluded that inducing tonic immobility in rabbits is appropriate for certain veterinary procedures as it holds less risk than anesthesia.[16]

Tonic immobility has also been hypothesized to occur in humans who are subject to intense trauma such as sexual assault.[17]

As a scientific tool

Tonic immobility is considered to be a fear-potentiated response induced by physical restraint and characterised by reduced responsiveness to external stimulation. It has been used as a measure in the assessment of animal welfare, particularly hens, since 1970.[18][19][20] The rationale for the TI test is that the experimenter simulates a predator thereby eliciting the anti-predator response. The precept is that the prey animal 'pretends' to be dead to be able to escape when/if the predator relaxes its concentration. Death feigning birds often take advantage of escape opportunities; TI in quail reduces the probability of the birds being predated by cats.[21]

To induce tonic immobility, the animal is gently restrained on its side or back for a period of time, e.g. 15 seconds. This is done either on a firm, flat surface or sometimes in a purpose-built ‘V’ or ‘U’-shaped restraining cradle. In rodents, the response is sometimes induced by additionally pinching or attaching a clamp to the skin at the nape of the neck.[22] Scientists record behaviours such as the number of inductions (15 second restraining periods) required for the animal to remain still, the latency to the first major movements (often cycling motions of the legs), latency to first head or eye movements and the duration of immobility, sometimes called the ‘righting time’. 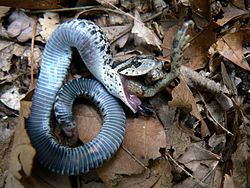 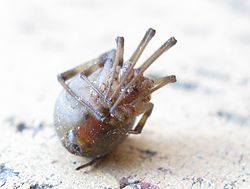 Cichlids of the genus Nimbochromis express thanatosis as a form of aggressive mimicry, playing dead to attract prey

In animal behaviour, thanatosis (from the Greek noun θανάτωσις meaning "putting to death") is the process by which an animal feigns death in order to evade unwelcome attention. It can be for various reasons, such as that of a prey evading a predator, a male trying to mate with a female, or a predator trying to lure potential prey closer. The French biologist Georges Pasteur classifies it as a form of self-mimesis, a form of camouflage or mimicry in which the "mimic" imitates itself in a dead state.[31]

For defensive purposes, thanatosis hinges on the pursuers' becoming unresponsive to its victim, as most predators only catch live prey.[31]

In beetles, artificial selection experiments have shown that there is heritable variation for length of death-feigning. Those selected for longer death-feigning durations are at a selective advantage to those at shorter durations when a predator is introduced,[32] which suggests that thanatosis is indeed adaptive.

In the hog-nosed snake, a threatened individual rolls onto its back and appears to be dead when threatened by a predator, while a foul-smelling, volatile fluid oozes from its body. Predators, such as cats, then lose interest in the snake, which both looks and smells dead. One reason for their loss of interest is that rotten-smelling animals are avoided as a precaution against infectious disease, so the snake is, in this case, exploiting that reaction. Newly hatched young also instinctively show this behaviour when rats try to eat them.[33]

In mammals, the Virginia opossum is perhaps the best known example of defensive thanatosis. "Playing possum" is an idiomatic phrase which means "pretending to be dead".[34] It comes from a characteristic of the Virginia opossum, which is famous for pretending to be dead when threatened.[35][36] This instinct does not always pay off in the modern world; for example, opossums scavenging roadkill may use it in response to the threat posed by oncoming traffic, and subsequently end up as roadkill themselves.[37]

"Playing possum" can also mean simply pretending to be injured, unconscious, asleep, or otherwise vulnerable, often to lure an opponent into a vulnerable position him or herself.[34]

Thanatosis has also been observed in some invertebrates such as the wasp, Nasonia vitripennis,[38] and the cricket, Gryllus bimaculatus.[39]

In the spider species Pisaura mirabilis, male spiders often stage elaborate rituals of gift-giving and thanatosis to avoid getting eaten by female spiders during mating. Studies have shown higher chances of success in mating with females for males who exhibit death-feigning more frequently than for males who do it less.[40]

Nimbochromis is a small genus of haplochromine cichlids mostly endemic to Lake Malawi in East Africa. They are known as 'sleeper cichlids' or (in Chichewa) kaligono ("sleepers"), due to their unique hunting behavior. In these large predatory fish, thanatosis is expressed as a form of aggressive mimicry. This fish will lie down on its side on the bottom sediments and assume a blotchy coloration. Scavengers, attracted to what seems like a dead fish, will approach the predator to investigate. N. livingstoni then abandons the pretense, righting itself again and quickly eating any scavenger unfortunate enough to come too close.[41][42] A similar strategy has also been observed in the African cichlid Lamprologus lemairii from Lake Tanganyika [43] and in the Central American yellowjacket cichlid Parachromis friedrichsthalii.[44]