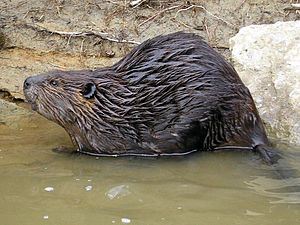 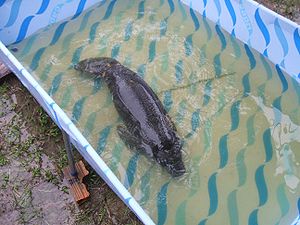 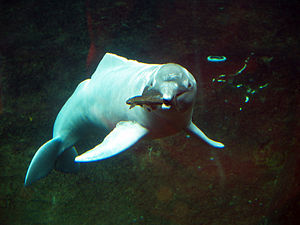 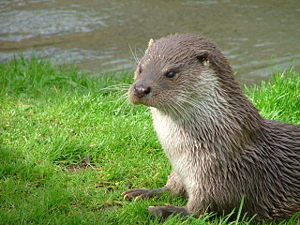 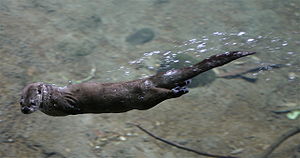 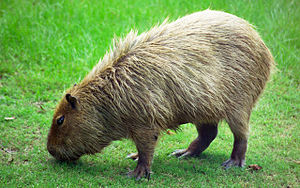 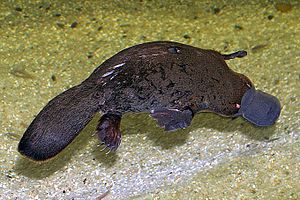 A platypus (Ornithorhynchus anatinus) at the Sydney Aquarium. 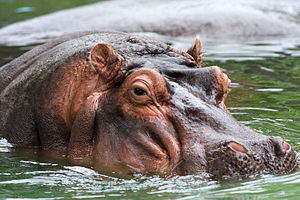 A partially submerged hippopotamus (Hippopotamus amphibius) at the Memphis Zoo. 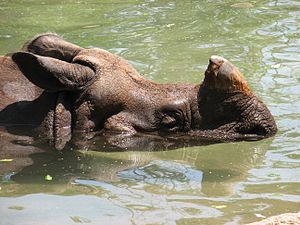 Aquatic and semiaquatic mammals are a diverse group of mammals that dwell partly or entirely in bodies of water. They include the various marine mammals who dwell in oceans, as well as various freshwater species, such as the platypus and the European otter.

Mammals evolved on land, so all aquatic and semiaquatic mammals have brought many terrestrial adaptations into the waters. They do not breathe underwater as fish do, so their respiratory systems had to protect the body from the surrounding water; valvular nostrils and an intranarial larynx exclude water while breathing and swallowing. To deal with water salinity, cetaceans and pinnipeds have evolved reniculate kidneys also found in bears. To navigate and detect prey in murky and turbid waters, aquatic mammals have developed a variety of sensory organs: for example, pinnipeds have elongated and highly sensitive whiskers that can pick up vibrations from fishes and reveal information about water currents, and toothed whales have evolved echolocation.[1]

Aquatic mammals also display a variety of locomotion styles. Cetaceans excel in streamlined body shape and the up-and-down movements of their flukes make them the fastest swimmers. The considerably slower sirenians can also propel themselves with their fluke but they can also walk on the bottom with their forelimbs. Seals sweep their hind flippers horizontally while fur seals and sea lions use their fore flippers. Walruses can grip the sea floor with their tusks and propel forward by a downward nod.[1]

Polar bears, otters, seals, sea lions, and beavers have fur, one of the defining mammalian features, that is oily and waterproof in order to trap air to provide insulation. In contrast, other aquatic mammals, such as whales, dolphins, porpoises, manatees, dugongs, walruses, and hippopotamuses, have lost their fur in favour of a thick and dense epidermis and a thickened fat layer (the blubber) in response to hydrodynamic requirements.[1]

Wading and bottom-feeding animals (e.g. moose and manatee) need to be heavier than water in order to keep contact with the floor or to stay submerged, surface-living animals (e.g. sea otter) need the opposite, and free-swimming animals living in open waters (e.g. dolphins) need to be neutrally buoyant in order to be able to swim up and down. Typically, thick and dense bone is found in bottom feeders and low bone density is associated with mammals living in deep water.[1]

Some aquatic mammals have retained four weight-bearing limbs (e.g. polar bears, beaver, otter, muskrat) and can walk on land like fully terrestrial animals. The long and thin legs of a moose limit exposure to and friction from water in contrast to hippopotamuses who keep most of their body submerged and have short and thick legs. The semiaquatic pygmy hippopotamus can walk quickly on a muddy underwater surface thanks to robust muscles and because all toes are weight-bearing. They also retain several primitive muscles lost in other artiodactyls, suggesting that they diverged early from the other members of the group, perhaps together with the cetaceans. Some aquatic mammals with flippers (e.g. sirenians, pinnipeds) are amphibious and regularly leave the water, sometimes for extended periods, and they have developed a range of locomotor behaviours on land. Sea lions can raise their bodies and even run on land using both their hind- and forelimbs. Seals, in contrast, undulate their bodies to move on land, similar to the up-and-down body motion used underwater by many aquatic mammals (dolphins, manatees).[1]

Cetacean brains are among the largest of all animals, both in absolute mass and relative to body size. This, however, is neither an adaptation to aquatic environments nor to accommodate echolocation. Indications of this include:

The shape and function of the eyes in aquatic animals are dependent on water depth and light exposure: limited light exposure results in a retina similar to that of nocturnal terrestrial mammals. Additionally, cetaceans have two areas of high ganglion cell concentration ("best-vision areas"), where other aquatic mammals (e.g. pinnipeds, sirenians, sea otters) only have one.[1]

This list covers only mammals that live in freshwater. For a list of saltwater-living mammals, see Marine mammal.