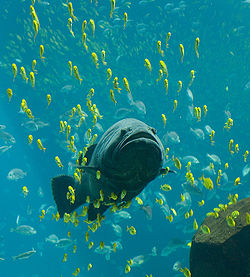 Grouper capture their prey by sucking them into their mouth

Aquatic predation presents a special difficulty as compared to predation on land, because the density of water is about the same as that of the prey, so that the prey tends to be pushed away. This problem was first identified by Robert McNeill Alexander.[1] As a result, underwater predators, especially bony fish, have evolved a number of specialized feeding mechanisms, such as filter feeding, ram feeding, suction feeding, protrusion, and pivot feeding.

Most underwater predators combine more than one of these basic principles. For example, a typical generalized predator, such as the cod, combines suction with some amount of protrusion and pivot feeding.

Suction feeding is a method of ingesting a prey item in fluids by sucking the prey into the predator's mouth. This is typically accomplished by the predator expanding the volume of its oral cavity and/or throat, resulting in a pressure difference between the inside of the mouth and the outside environment. When the mouth is opened, the pressure difference causes water to flow into the predator's mouth, carrying the prey item in with the fluid flow. Bony fish have evolved ingenious mechanisms, so-called mechanical linkages for rapid and forceful expansion of the buccal cavity. 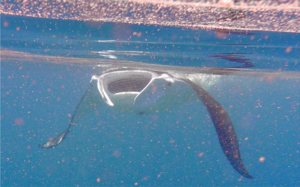 Foraging Manta alfredi ram feeding, swimming against the tidal current with its mouth open and sieving zooplankton from the water [2]

Ram feeding, also known as lunge feeding, is a method of feeding underwater in which the predator moves forward with its mouth open, engulfing the prey along with the water surrounding it. During ram feeding, the prey remains fixed in space, and the predator moves its jaws past the prey to capture it. The motion of the head may induce a bow wave in the fluid which pushes the prey away from the jaws, but this can be avoided by allowing water to flow through the jaw. This can be accomplished by means of an expandable throat, as in snapping turtles and baleen whales,[3] or by allowing water to flow out through the gills, as in sharks and herring. A number of species have evolved narrow snouts, as in gar fish and water snakes .[4]

Herrings often hunt copepods. If they encounter copepods schooling in high concentrations, the herrings switch to ram feeding. They swim with their mouth wide open and their opercula fully expanded. Every several feet, they close and clean their gill rakers for a few milliseconds (filter feeding). The fish all open their mouths and opercula wide at the same time (the red gills are visible in the photo below—click to enlarge). The fish swim in a grid where the distance between them is the same as the jump length of the copepods. 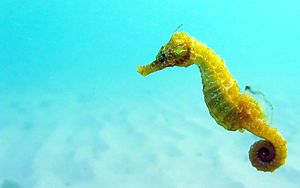 Seahorses rely on stealth to ambush small prey such as copepods. They use pivot feeding to catch the copepod, which involves rotating their snout at high speed and then sucking in the copepod.[5][6]

Pivot feeding is a method to transport the mouth towards the prey by an upward turning of the head, which is pivoting on the neck joint. Pipefish such as sea horses and sea dragons are specialized on this feeding mechanism.[7] With prey capture times of down to 5 ms (shrimpfish Centriscus scutatus) this method is used by the fastest feeders in the animal kingdom.

The secret of the speed of pivot feeding is in a locking mechanism, in which the hyoid arch is folded under the head and is aligned with the urohyal which connects to the shoulder girdle. A four-bar linkage at first locks the head in a ventrally bent position by the alignment of two bars. The release of the locking mechanism jets the head up and moves the mouth toward the prey within 5-10 ms. The trigger mechanism of unlocking is debated, but is probably in lateral adduction.

Protrusion is the extension of the mouth or premaxilla towards the prey, via mechanical linkages. Protrusion is only known in modern bony fishes, which possess many forms of coupled linkages in their head.[8] Remarkable examples are the slingjaw wrasse and the sand eel which can protrude their mouth by several centimeters. Another example of protusion is seen in dragonfly larvae, or nymphs, which have hydraulic lower mandibles, protruding forward to catch prey and bring it to the top jaw.[9]

This is the selection of food particles from a water flow, for example by the gill rakers of fish, the baleens of whales, or the ostia of sponges.

In filter feeding, the water flow is primarily generated by the organism itself, for example by creating a pressure, by active swimming, or by ciliary movements.

In suspension feeding, the water flow is primarily external or if the particles themselves move with respect to the ambient water, such as in sea lilies.

Baleen whales feed on plankton by a technique called lunge feeding. Lunge feeding could be regarded as a kind of inverted suction feeding, during which a whale takes a huge gulp of water, which is then filtered through the baleens.[10] Biomechanically this is a unique and extreme feeding method, for which the animal at first must accelerate to gain enough momentum to fold its elastic throat (buccal cavity) around the volume of water to be swallowed.[11] Subsequently the water flows back through the baleens keeping back the food particles. The highly elastic and muscular buccal rills are a specialized adaptation to this feeding mode.