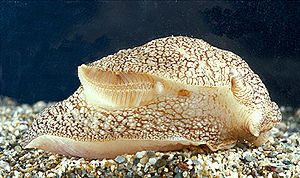 Sea slugs breathe through a gill (or ctenidium)

Aquatic respiration is the process whereby an aquatic animal obtains oxygen from water.

In most fish respiration takes place through gills. Lungfish, however, possess one or two lungs. The labyrinth fish have developed a special organ that allows them to take advantage of the oxygen of the air, but is not a true lung. Fish use the process known as countercurrent flow, in which water and blood flow in opposite directions across the gills, maximizing the diffusion of oxygen.

Mollusks generally possess gills that allow exchange of oxygen from an aqueous environment into the circulatory system. These animals also possess a heart that pumps blood which contains hemocyaninine as its oxygen-capturing molecule. Therefore, this respiratory system is similar to that of vertebrate fish. The respiratory system of gastropods can include either gills or a lung.

Aquatic arthropods generally possess some form of gills in which gas exchange takes place by diffusing through the exoskeleton. Others may breathe atmospheric air while remaining submerged, via breathing tubes or trapped air bubbles, though some aquatic insects may remain submerged indefinitely and respire using a plastron.

The anatomical structure of the lungs is less complex in reptiles than in mammals, with reptiles lacking the very extensive airway tree structure found in mammalian lungs. Gas exchange in reptiles still occurs in alveoli however, reptiles do not possess a diaphragm. Thus, breathing occurs via a change in the volume of the body cavity which is controlled by contraction of intercostal muscles in all reptiles except turtles. In turtles, contraction of specific pairs of flank muscles governs inspiration or expiration.[1]

See also reptiles for more detailed descriptions of the respiratory system in these animals.

Both the lungs and the skin serve as respiratory organs in amphibians. The skin of these animals is highly vascularized and moist, with moisture maintained via secretion of mucus from specialized cells. While the lungs are of primary importance to breathing control, the skin's unique properties aid rapid gas exchange when amphibians are submerged in oxygen-rich water.[2]

The respiratory system of birds differs significantly from that found in mammals, containing unique anatomical features such as air sacs. The lungs of birds also do not have the capacity to inflate as birds lack a diaphragm and a pleural cavity. Gas exchange in birds occurs between air capillaries and blood capillaries, rather than in alveoli. See Avian respiratory system for a detailed description of these and other features. 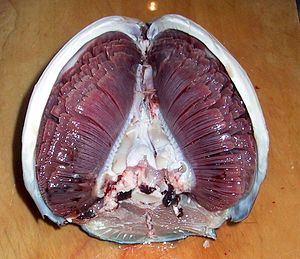 Posterior view of the gills of a tuna

Large aquatic animals have developed gills for respiration which are specifically adapted to their function, for example, they have:

In osteichthyes, the gills contain 4 gill arches on each side of the head, two on each side for chondrichthyes or 7 gill baskets on each side of the fish's head in Lampreys In fish, the long bony cover for the gill (the operculum) can be used for pushing water. Some fish pump water using the operculum. Without an operculum, other methods, such as ventilation, are required. Some species of sharks use this system. When they swim, water flows into the mouth and across the gills. Because these sharks rely on this technique, they must keep swimming in order to respire.

Scientists have investigated what part of the body is responsible for maintaining the respiratory rhythm. They found that neurons located in the brainstem of fish are responsible for the genesis of the respiratory rhythm.[3] The position of these neurons is slightly different from the centers of respiratory genesis in mammals but they are located in the same brain compartment, which has caused debates about the homology of respiratory centers between aquatic and terrestrial species. In both aquatic and terrestrial respiration, the exact mechanisms by which neurons can generate this involuntary rhythm are still not completely understood (see Involuntary control of respiration).

Another important feature of the respiratory rhythm is that it is modulated to adapt to the oxygen consumption of the body. As observed in mammals, fish “breathe” faster and heavier when they do physical exercise. The mechanisms by which these changes occur have been strongly debated over more than 100 years between scientists.[4] The authors can be classified in 2 schools:

1. Those who think that the major part of the respiratory changes are pre-programmed in the brain, which would imply that neurons from locomotion centers of the brain connect to respiratory centers in anticipation of movements.

Many now agree that both mechanisms are probably present and complementary, or working alongside a mechanism that can detect changes in oxygen and/or carbon dioxide blood saturation.