Aquidneck Island, officially Rhode Island, is located in Narragansett Bay, in the U.S. state of Rhode Island. The total land area is 97.9 km2 (37.8 sq mi), which makes it the largest island in the bay. The 2000 United States Census reported its population as 60,870.

Aquidneck Island is home to three towns, from north to south geographically: Portsmouth, Middletown and Newport.

"Aquidneck" is derived from the Narragansett name for the island, aquidnet.[1] The word literally means "floating-mass-at" or simply "at the island". Other sources claim Aquidneck is a Native word meaning "Isle of Peace."[2]

It is unclear how Aquidneck Island came to be known as Rhode Island. In 1524, the explorer Giovanni da Verrazzano noted the presence of an island near the mouth of Narragansett Bay, which he likened to the Greek island of Rhodes. Although it is unclear to which island Verrazzano was referring, the pilgrims who later colonized the area decided to apply the moniker "Rhode Island" to Aquidneck Island. The earliest known use of the name "Rode Island" was in 1637 by Roger Williams. The name was officially applied to the island in 1644 with these words: "Aquethneck shall be henceforth called the Ile of Rods or Rhod-Island." The name "Isle of Rodes" is found used in a legal document as late as 1646.[3][4]

Another popular origin theory is based on the fact that Adriaen Block, during his 1614 expedition, passed by Aquidneck Island, described in a 1625 account of his travels as "an island of reddish appearance" (in 17th century Dutch, een rodlich Eylande).[5] Dutch maps from as early as 1659 call the island "Roode Eylant", or Red Island. Historians have theorized that the island was named by the Dutch (possibly by Adriaen Block himself) for either the red autumn foliage or red clay on portions of the shore.[6][7]

English colonists first settled on present-day Aquidneck Island in 1638 in the region called by the natives "Pocasset" (meaning "where the stream widens"), the northern part of Portsmouth. At one time, Aquidneck Island was controlled by the Wampanoag, whose leader was the Sachem Massasoit. Traditionally, Massasoit greeted the Pilgrims at Plymouth, Massachusetts, in 1621. Aquidneck Island was used primarily as a hunting territory although it was probably a summer residence as well.

As many as nine in ten of the Wampanoags were killed by the epidemics brought to North America by the Europeans in 1617–1619. The Narragansetts, who were unaffected by the diseases, fought for and obtained control of Aquidneck Island and other places. The Wampanoags regained control over their territories.

A group of European settlers engaged Roger Williams in 1638 to negotiate the terms of their purchase of the island from a sachem named Miantonomi. These settlers included William Coddington, Anne and William Hutchinson, Philip Sherman, William Dyer, John Coggeshall, Nicholas Easton, William Brenton, John Clarke, and Richard Maxson (Maggsen).[10] Aquidneck Island, at the time, was the royal seat of Miantonomi. The terms of the sale were a swap: the settlers could have the island in exchange for forty fathoms of white peage, twenty hoes, ten coats for the resident natives and five more fathoms of wampum for the local sachem.[11] It is recorded that the Narragansett Sachems, Canonicus and his nephew, Miantonomi, who were in control of the island at the time, signed a "deed" for Aquidneck Island. These first settlers founded Pocasset, but the following spring, in 1639, William Coddington chose Newport, with its excellent harbor, for a new settlement, and some of the settlers followed him there.

A careful reading of the Records of the Colony of Rhode Island and Providence Plantations, in New England (Vol. I, 1636–1663) will show a letter written by Roger Williams later in his life in which he attributes the kindness and generosity of the Wampanoag Massasoit years before for the gifts of Providence, all of Aquidneck Island, and Wappewassick (Prudence Island). Massasoit endowed Roger Williams with Aquidneck Island, Providence and Prudence Island for his friendship and love of natives. Massasoit received no payment for these lands, and did not want any. Roger Williams said he was indebted to the Wampanoag Sachem until the day he died.

During the American Revolution Aquidneck Island was occupied by the British from 1776 to 1779. The Battle of Rhode Island on August 29, 1778, was an unsuccessful attempt by the Continental Army under command of Major General John Sullivan to drive out the British and retake the strategic port city of Newport.

The island is home to Salve Regina University, the Naval War College, the Newport campus of the Community College of Rhode Island, and International Yacht Restoration School.

The Claiborne Pell Newport Bridge (1969) connects Aquidneck Island to Jamestown on nearby Conanicut Island in Narragansett Bay, and subsequently to the mainland on the western side of the bay. 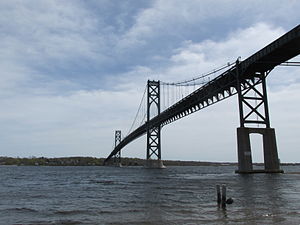 The Mount Hope Bridge (1929), adjacent to Bristol Ferry and Common Fence Point, connects the northern side of Aquidneck Island in Portsmouth to the mainland at Bristol.

The Sakonnet River Bridge (2012) in Portsmouth, adjacent to Common Fence Point, connects the northeastern side of the island to the mainland at Tiverton over the Sakonnet River, a narrow saltwater strait. It is a replacement for a bridge of the same name built in 1956.

South of the Sakonnet River Bridge and its predecessor, in the area known as The Hummocks and Island Park, is the site of the Stone Bridge, built in 1907 on the site of an earlier wooden bridge and destroyed by Hurricane Carol in 1954.

The bridges replaced long-running ferries to the mainland and other Narragansett Bay islands.