From Infogalactic: the planetary knowledge core
Jump to: navigation, search
This article is about the Arabian Sea (Bahr al-'Arab). For the river in Sudan, see Bahr al-Arab.

The Arabian Sea is a region of the northern Indian Ocean bounded on the north by Pakistan and Iran, on the west by northeastern Somalia and the Arabian Peninsula, and on the east by India. An ancient name was the Erythraean Sea and Persian Sea. 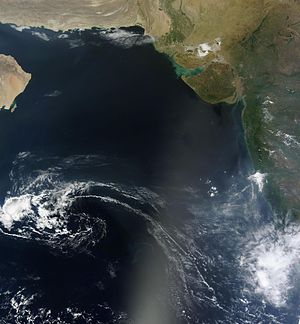 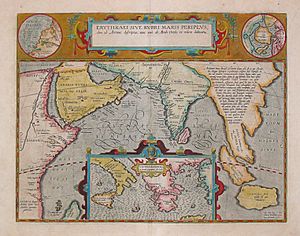 The countries with coastlines on the Arabian Sea are Somalia, Djibouti, Yemen, Oman, Iran, Pakistan, India and the Maldives. There are several large cities on the sea's coast including Karachi, Gwadar, Pasni, Ormara, Aden, Muscat, Mumbai, Keti Bandar, Salalah, Duqm and Kochi.

The International Hydrographic Organization defines the limits of the Arabian Sea as follows:[2]

On the West. The Eastern limit of the Gulf of Aden [The meridian of Cape Guardafui (Ras Asir, 51°16'E)].

On the South. A line running from the South extremity of Addu Atoll (Maldives), to the Eastern extreme of Ràs Hafun (Africa, 10°26'N).

The Arabian Sea historically and geographically has been referred to by many different names by Arab travellers and European geographers, that include[3] Indian Sea, Persian Sea, Sindhu Sagar,[4] Erythraean Sea,[5] Sindh Sea,[citation needed] and Akhzar Sea.[citation needed]

The Arabian Sea has been an important marine trade route since the era of the coastal sailing vessels from possibly as early as the 3rd millennium BCE, certainly the late 2nd millennium BCE through the later days known as the Age of Sail. By the time of Julius Caesar, several well-established combined land-sea trade routes depended upon water transport through the Sea around the rough inland terrain features to its north. 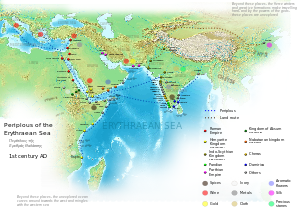 Names, routes and locations of the Periplus of the Erythraean Sea

These routes usually began in the Far East or down river from Madhya Pradesh with transshipment via historic Bharuch (Bharakuccha), traversed past the inhospitable coast of today's Iran then split around Hadhramaut into two streams north into the Gulf of Aden and thence into the Levant, or south into Alexandria via Red Sea ports such as Axum. Each major route involved transhipping to pack animal caravan, travel through desert country and risk of bandits and extortionate tolls by local potentiates.

This southern coastal route past the rough country in the southern Arabian peninsula (Yemen and Oman today) was significant, and the Egyptian Pharaohs built several shallow canals to service the trade, one more or less along the route of today's Suez canal, and another from the Red Sea to the Nile River, both shallow works that were swallowed up by huge sand storms in antiquity. Later the kingdom of Axum arose in Ethiopia to rule a mercantile empire rooted in the trade with Europe via Alexandria.

The Kochi Port located on the south-west coast of India is the nearest Indian port to the international shipping routes, as well as one of the largest and busiest ports serving the Arabian Sea. Seen here is the International Container Transshipment Terminal, the only such facility in India.

Jawaharlal Nehru Port in Mumbai is the largest port in Arabian sea, and the largest container port in India.

The Port of Karachi (Urdu: بندر گاہ كراچى, Bandargāh-i Karācī) is Pakistan's largest and busiest seaport, handling about 60% of the nation's cargo (25 million tons per annum). It is located between the Karachi towns of Kiamari and Saddar, close to the main business district and several industrial areas. The geographic position of the port places it in close proximity to major shipping routes such as the Strait of Hormuz. The history of the port is intertwined with that of the city of Karachi. Several ancient ports have been attributed in the area including "Krokola", "Morontobara" (Woman's Harbour) (mentioned by Nearchus), Barbarikon (the Periplus of the Erythraean Sea, and Debal (a city invaded and captured by the Muslim general Muhammad bin Qasim in 712 AD). There is a reference to the early existence of the port of Karachi in the "Umdah", by the Arab navigator Sulaiman al Mahri (AD 1511), who mentions "Ras al Karazi" and "Ras Karashi" while describing a route along the coast from Pasni to Ras Karashi.

Karachi is also mentioned in the sixteenth century Turkish treatise Mirat ul Memalik (Mirror of Countries, 1557) by the Ottoman captain Seydi Ali Reis, which is a compilation of sailing directions from the Portuguese island of Diu to Hormuz in the Persian Gulf. It warns sailors about whirlpools and advises them to seek safety in "Kaurashi" harbour if they found themselves drifting dangerously.

The gate facing the sea was called "Kharadar" (salt gate), and the gate facing the Lyari River was called "Mithadar" (sweet gate). The modern neighbourhoods around the location of the gates are called Mithadar and Kharadar. Surrounded by mangrove swamps to the east, the sea to the southwest, and the Lyari River to the north, the town was well defended and engaged in a profitable trade with Muscat and Bahrain.

File:Karachi port and harbour aerial.jpg
The Port of Karachi in Pakistan's largest city, Karachi, with some of the city's residential areas visible. The port is one of the busiest in the Arabian Sea

The Gwadar Port is a warm-water, deep-sea port situated at Gwadar in Balochistan, Pakistan at the apex of the Arabian Sea and at the entrance of the Persian Gulf, about 460 km west of Karachi and approximately 75 km (47 mi) east of Pakistan's border with Iran. The port is located on the eastern bay of a natural hammerhead-shaped peninsula jutting out into the Arabian Sea from the coastline.

Port of Salalah in Salalah, Oman is also a major port in the area. From a modest start in 1997, the Omani container transhipment port has achieved consistent growth. For a growing number of ships’ crew, the port of Salalah is a welcome sight after an unpleasant and often prolonged encounter with pirates. The Port of Salalah is a key container transhipment hub on the Arabian Sea and is often used as the first port of call for vessels whose crew have just been released from the clutches of Somali pirates following ransom payments for withheld vessels and crew. The port also plays host as a supply base for the visiting warships that provide protective escorts for merchant shipping in the sea lanes. From that dual role has emerged another, one as an intelligence network — both military and civilian — to exchange information on possible pirate sightings and near misses. Also, the International Task Force often uses the port as a base. There is a significant number of warships of all nations coming in and out of the port, which makes it a very safe bubble. The port handled just under 3.5m teu[clarification needed] in 2009[6]

There are several islands in the Arabian Sea, with the largest being Socotra (Yemen), Masirah (Oman), Astola Island (Pakistan) and Andrott (India). 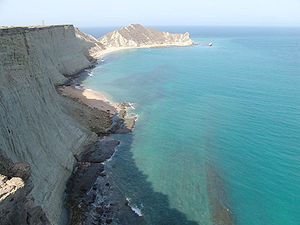 Astola is a Pakistani island just off the coast of Balochistan, Pakistan

Astola Island, also known as Jezira Haft Talar (Urdu: جزیرہ ہفت تلار‎) or 'Island of the Seven Hills', is a small, uninhabited island in the northern tip of the Arabian Sea in Pakistan's territorial waters. It is a popular eco-tourism destination in the region. Overnight tourists camp on the island and bring their own provisions. Camping, fishing and scuba-diving expeditions are popular. It is also a site for observing turtle breeding. Endangered animals such as the green turtle (Chelonia mydas) and the Hawksbill turtle (Eretmochelys imbracata) nest on the beach at the foot of the cliffs. The island is also a very important area for endemic reptiles such as the Astola Viper (Echis carinatus astolae). 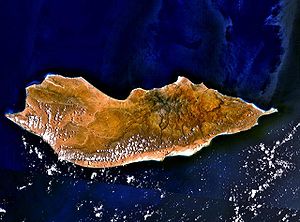 Socotra (Arabic: سُقُطْرَى‎‎ Suquṭra), also spelled Soqotra, is the largest island, being part of a small archipelago of four islands. It lies some 240 kilometres (150 mi) east of the Horn of Africa and 380 kilometres (240 mi) south of the Arabian Peninsula. The island is very isolated and through the process of speciation, a third of its plant life is found nowhere else on the planet. It has been described as the most alien-looking place on Earth.

Masirah (Arabic: مصيرة‎‎) is an island off the East coast of Oman. The main industries here are fishing and traditional textile manufacturing. Formerly, traditional ship building was important. The rugged terrain of the island and surrounding rough coastline has led to the appearance of many wrecked dhows on the beaches of the island, most of them well preserved by the salt water and intense heat. The ocean bottom environment surrounding Masirah is hostile as the majority of the area is covered in either sand or hard rock. Despite the poor quality ocean bottom, the area is very productive with marine fisheries, and any hard objects (barrels, engines) are immediately colonized by local fauna.