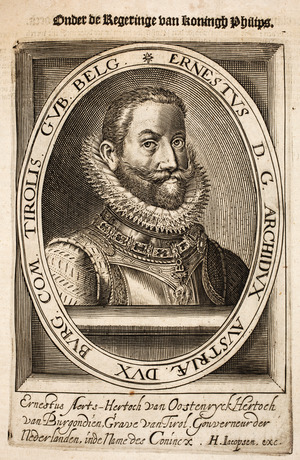 Engraving of Archduke Ernest of Austria

Born at Vienna, he was educated with his brother Rudolf II, Holy Roman Emperor, in the court of Spain. In 1573 and 1587, he was a candidate for the throne of Poland. From 1576 onwards, he was governor in the Archduchy of Austria, where he promoted the counterreformation. In 1590, he became governor of Inner Austria as regent for his young cousin Ferdinand, and from 1594 to 1595 he served as governor of the Spanish Netherlands.