From Infogalactic: the planetary knowledge core
Jump to: navigation, search
This article is about a 19th century archduke. For the 20th century, see Archduke Wilhelm of Austria.

Archduke Wilhelm Franz Karl of Austria-Teschen (21 April 1827 – 29 April 1894) was an Archduke of Austria from the House of Habsburg.

He held the office of Grand Master of the Teutonic Knights in 1863. He gained the rank of General Field Marshal in the service of the Austrian Army. He was Governor of the Federal Fortress of Mainz.

Archduke Wilhelm of Austria died unmarried and without issue on July 29, 1894 in Weikersdorf after falling from a horse. He had been riding in Baden when his horse was frightened by a motor car. The horse bolted, and the Archduke was thrown. One of his feet remained stuck in the stirrup, and he was dragged more than 100 yards. He died without regaining consciousness. His death was attributed to a concussion on the brain. The archduke was 67 years old. 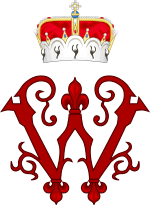