From Infogalactic: the planetary knowledge core
(Redirected from Architecture of Egypt)
Jump to: navigation, search 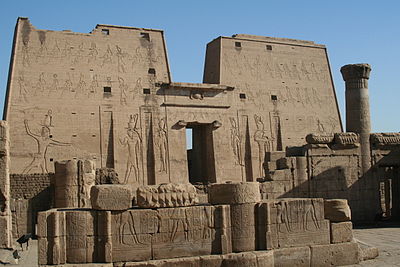 The well preserved Temple of Horus at Edfu is an example of Egyptian architecture and architectural sculpture.

Ancient Egyptian architecture is the architecture of Ancient Egypt, one of the most influential civilizations throughout history, which developed a vast array of diverse structures and great architectural monuments along the Nile, including pyramids and temples.

Due to the scarcity of wood,[1] the two predominant building materials used in ancient Egypt were sun-baked mud brick and stone, mainly limestone, but also sandstone and granite in considerable quantities.[2] From the Old Kingdom onward, stone was generally reserved for tombs and temples, while bricks were used even for royal palaces, fortresses, the walls of temple precincts and towns, and for subsidiary buildings in temple complexes. The core of the pyramids consisted of locally quarried stone, mudbricks, sand or gravel. For the casing stones were used that had to be transported from father away, predominantly white limestone from Tura and red granite from upper Egypt. 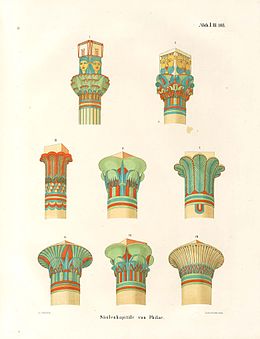 Drawings of the types of the architectural capitals specific for the Ancient Egyptian civilization.

Ancient Egyptian houses were made out of mud collected from the Nile river. It was placed in molds and left to dry in the hot sun to harden for use in construction.

Many Egyptian towns have disappeared because they were situated near the cultivated area of the Nile Valley and were flooded as the river bed slowly rose during the millennia, or the mud bricks of which they were built were used by peasants as fertilizer. Others are inaccessible, new buildings having been erected on ancient ones. Fortunately, the dry, hot climate of Egypt preserved some mud brick structures. Examples include the village Deir al-Madinah, the Middle Kingdom town at Kahun,[3] and the fortresses at Buhen[4] and Mirgissa. Also, many temples and tombs have survived because they were built on high ground unaffected by the Nile flood and were constructed of stone.

Thus, our understanding of ancient Egyptian architecture is based mainly on religious monuments,[5] massive structures characterized by thick, sloping walls with few openings, possibly echoing a method of construction used to obtain stability in mud walls. In a similar manner, the incised and flatly modeled surface adornment of the stone buildings may have derived from mud wall ornamentation. Although the use of the arch was developed during the fourth dynasty, all monumental buildings are post and lintel constructions, with flat roofs constructed of huge stone blocks supported by the external walls and the closely spaced columns.

Exterior and interior walls, as well as the columns and piers, were covered with hieroglyphic and pictorial frescoes and carvings painted in brilliant colors.[6] Many motifs of Egyptian ornamentation are symbolic, such as the scarab, or sacred beetle, the solar disk, and the vulture. Other common motifs include palm leaves, the papyrus plant, and the buds and flowers of the lotus.[7] Hieroglyphs were inscribed for decorative purposes as well as to record historic events or spells. In addition, these pictorial frescoes and carvings allow us to understand how the Ancient Egyptians lived, statuses, wars that were fought and their beliefs. This was especially true when exploring the tombs of Ancient Egyptian officials in recent years.

The Giza Necropolis stands on the Giza Plateau, on the outskirts of Cairo, Egypt. This complex of ancient monuments is located some 8 kilometers (5 mi) inland into the desert from the old town of Giza on the Nile, some 20 kilometers (12 mi) southwest of Cairo city center. This Ancient Egyptian necropolis consists of the Pyramid of Khufu (also known as the Great Pyramid and the Pyramid of Cheops), the somewhat smaller Pyramid of Khafre (or Kephren/Chefren), and the relatively modest-sized Pyramid of Menkaure (or Mykerinus/Mycerinus), along with a number of smaller satellite edifices, known as "queens" pyramids, the Great Sphinx as well as a few hundred mastabas, and chapels.[9] 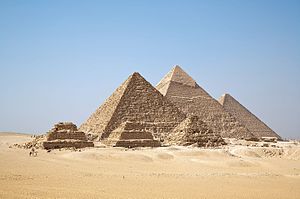 The Pyramids of Giza

The pyramids, which were built in the Fourth Dynasty, testify to the power of the pharaonic religion and state. They were built to serve both as grave sites and also as a way to make their names last forever.[10] The size and simple design show the high skill level of Egyptian design and engineering on a large scale.[11] The Great Pyramid of Giza, which was probably completed c. 2580 BC, is the oldest of the Giza pyramids and the largest pyramid in the world, and is the only surviving monument of the Seven Wonders of the Ancient World.[12] The pyramid of Khafre is believed to have been completed around 2532 BC, at the end of Khafre's reign.[13] Khafre ambitiously placed his pyramid next to his fathers. It is not as tall as his father's pyramid but he was able to give it the impression of appearing taller by building it on a site with a foundation 33 feet (10 m) higher than his father's.[14] Along with building his pyramid, Chefren commissioned the building of the giant Sphinx as guardian over his tomb. The face of a human, possibly a depiction of the pharaoh, on a lion's body was seen as a symbol of divinity among the Greeks fifteen hundred years later.[15] The Great Sphinx is carved out the limestone bedrock and stands about 65 feet (20 m) tall.[16] Menkaure's pyramid dates to circa 2490 BC and stands 213 feet (65 m) high making it the smallest of the Great Pyramids.[17]

Popular culture leads people to believe that Pyramids are highly confusing, with many tunnels within the pyramid to create confusion for grave robbers. This is not true. The shafts of pyramids are quite simple, mostly leading directly to the tomb. The immense size of the pyramids attracted robbers to the wealth that lay inside which caused the tombs to be robbed relatively soon after the tomb was sealed in some cases.[18] However, there are sometimes additional tunnels, but these were used for the builders to understand how far they could dig the tomb into the crust of the Earth. Also, it is popular thought that due to grave robbers, future Kings were buried in the Valley of the Kings to help keep them hidden. This is also false, as the Pyramid construction continued for many Dynasties, just on a smaller scale. Finally, the pyramid construction was stopped due to economic factors, not theft.

Evidence suggests that they were built by paid laborers and craftsmen that were well cared for and not by slaves. 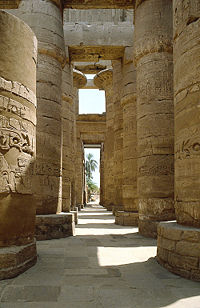 The hypostyle hall of Karnak Temple

The key difference between Karnak and most of the other temples and sites in Egypt is the length of time over which it was developed and used. Construction work began in the 16th century BC. Approximately 30 pharaohs contributed to the buildings, enabling it to reach a size, complexity and diversity not seen elsewhere. Few of the individual features of Karnak are unique, but the size and number of features is overwhelming.

The Luxor Temple is a huge ancient Egyptian temple complex located on the east bank of the River Nile in the city today known as Luxor (ancient Thebes). Construction work on the temple began during the reign of Amenhotep III in the 14th century BC. Horemheb and Tutankhamun added columns, statues, and friezes – and Akhenaten had earlier obliterated his father's cartouches and installed a shrine to the Aten – but the only major expansion effort took place under Ramesses II some 100 years after the first stones were put in place. Luxor is thus unique among the main Egyptian temple complexes in having only two pharaohs leave their mark on its architectural structure.

Luxor Temple, from the east bank of the Nile

The temple proper begins with the 24 m (79 ft) high First Pylon, built by Ramesses II. The pylon was decorated with scenes of Ramesses's military triumphs (particularly the Battle of Qadesh); later pharaohs, particularly those of the Nubian and Ethiopian dynasties, also recorded their victories there. This main entrance to the temple complex was originally flanked by six colossal statues of Ramesses – four seated, and two standing – but only two (both seated) have survived. Modern visitors can also see a 25 m (82 ft) tall pink granite obelisk: this one of a matching pair until 1835, when the other one was taken to Paris where it now stands in the centre of the Place de la Concorde.

Through the pylon gateway leads into a peristyle courtyard, also built by Ramesses II. This area, and the pylon, were built at an oblique angle to the rest of the temple, presumably to accommodate the three pre-existing barque shrines located in the northwest corner. After the peristyle courtyard comes the processional colonnade built by Amenhotep III – a 100 m (330 ft) corridor lined by 14 papyrus-capital columns. Friezes on the wall describe the stages in the Opet Festival, from sacrifices at Karnak at the top left, through Amun's arrival at Luxor at the end of that wall, and concluding with his return on the opposite side. The decorations were put in place by Tutankhamun: the boy pharaoh is depicted, but his names have been replaced with those of Horemheb.

Beyond the colonnade is a peristyle courtyard, which also dates back to Amenhotep's original construction. The best preserved columns are on the eastern side, where some traces of original color can be seen. The southern side of this courtyard is made up of a 36-column hypostyle court that leads into the dark inner rooms of the temple.