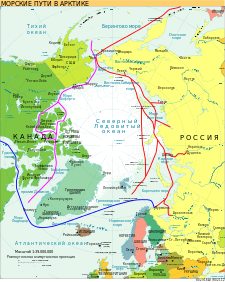 The Arctic Bridge or Arctic Sea Bridge is a seasonal sea route linking Russia to Canada, specifically the Russian port of Murmansk to the Hudson Bay port of Churchill, Manitoba. Churchill is the principal seaport on Canada's northern coast and has rail and air (but no road) connections to the rest of Canada. It is the northern terminus of the Hudson Bay Railway and is a useful link in the export of grain from the Canadian Prairies to European markets. The port of Murmansk on the ice free Kola Bay is linked by the Russian gauge Murmansk Railway to Saint Petersburg and the rest of Europe. Murmansk is also linked to the rest of Russia by the M18 Kola Motorway.

Russia has shown a keen interest in developing[clarification needed] the Arctic Bridge route. If developed (along with the Northwest Passage) it could serve as a major trade route between Europe and North America. According to the Russian Federation's Ottawa press attaché, Sergey Khuduiakov, the opening of the trade route has been enabled by the retreat of Arctic ice. Now, the route is only easily navigable about four months of the year, but it will become more and more viable as the climate warms.[1]

The concept of an "Arctic Bridge", with a hub in Churchill, was proposed by Canadians in the early 1990s. In 1997 the port of Churchill was sold to Denver-based OmniTRAX, a major railroad operator. In 2004, OmniTRAX entered into talks with the Murmansk Shipping Company to promote the Arctic Bridge concept.[2] While the Canadian Wheat Board (CWB) has been able to keep Churchill a viable port, exporting nearly 400,000 tons (15 million bushels) of wheat each year, OmniTRAX has had difficulty in landing imports at Churchill.[3]

On 17 October 2007, the first shipment of fertilizer from Murmansk arrived at the Port of Churchill.[1][4] Two separate 9000 tonne imports of Russian fertilizer took place in 2008, purchased by the Farmers of North America cooperative of Saskatoon from Kaliningrad.[5]