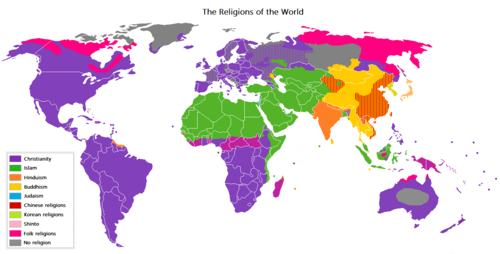 Geographical distribution of major religions in the modern world

The argument from inconsistent revelations, also known as the avoiding the wrong hell problem, is an argument against the existence of God. It asserts that it is unlikely that God exists because many theologians and faithful adherents have produced conflicting and mutually exclusive revelations. The argument states that since a person not privy to revelation must either accept it or reject it based solely upon the authority of its proponent, and there is no way for a mere mortal to resolve these conflicting claims by investigation, it is prudent to reserve one's judgment.

It is also argued that it is difficult to accept the existence of any one God without personal revelation. Most arguments for the existence of God are not specific to any one religion and could be applied to many religions with near equal validity. When faced with these competing claims in the absence of a personal revelation, it is argued that it is difficult to decide amongst them, to the extent that acceptance of any one religion requires a rejection of the others. Further, were a personal revelation to be granted to a nonbeliever, the same problem of confusion would develop in each new person the believer shares the revelation with.

Christians believe that Jesus is the Christian Messiah, Savior of the World and the divine Son of God; Jews and Muslims do not. Similarly, Muslims believe that the Qur'an was divinely authored, while Jews and Christians do not. There are many examples of such contrasting views, indeed, opposing fundamental beliefs (schisms) exist even within each major religion. Christianity, for example, has many subsets (denominations), which differ greatly on issues of doctrine. Hinduism, with its conception of multiple avatars being expressions of one Supreme God, is more open to the possibility that other religions might be correct for their followers, but this same principle requires the rejection of the exclusivity demanded by each of the Abrahamic religions.

Additionally, faith-confirming events such as visions and miracles are reported within all faiths with regularity. A single deity associated with a single exclusive existing faith or sect would either have to have caused adherents to other faiths to have visionary or miraculous experiences which lead them to continue to reject the true faith, or at least allowed some other agency to cause these same effects.

The problem does not arise in some theological models. In Deism, it is believed that there is a God, but presumed that there are no divinely caused revelations or miracles at all, leaving reports of such to have natural explanations. In some forms of Pantheism (where God is the Universe) and in Pandeism (where God has become the Universe), the appearance of many inconsistent divine revelations or miracles might simply result unintentionally from the divine nature of the Universe itself.[citation needed]

The concept of mutual exclusivity of different religions itself (as opposed to religious pluralism) is primarily associated with Abrahamic faiths; pagan religions, historically the most common forms of worship, were typically polytheistic and compatible with each other.[1] The roots of the mutual exclusivity may be seen in the Torah, where Jews are ordered to worship the God of Israel to the exclusion of all others; however, even the Torah does not instruct its followers to deny the existence of other gods,[2] in a stance that is now called henotheism. Later theological developments within Judaism led it to adopt the strictly monotheistic stance, where its god was declared the only one true deity in existence, and this position was inherited by Christianity and Islam.

The argument appears, among other places, in Voltaire's Candide and Philosophical Dictionary. It is also manifested in Denis Diderot's statement that, whatever proofs are offered for the existence of God in Christianity or any other religion, "an Imam can reason the same way".[3]