From Infogalactic: the planetary knowledge core
Jump to: navigation, search
For the social class, see Aristocracy (class). For other uses, see Aristocrat (disambiguation). 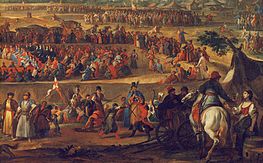 Aristocracy (Greek ἀριστοκρατία aristokratía, from ἄριστος aristos "excellent," and κράτος kratos "power") is a form of government that places power in the hands of a small, privileged ruling class.[1] The term derives from the Greek aristokratia, meaning "rule of the best".[2]

At the time of the word's origins in Ancient Greece, the Greeks conceived it as rule by the best qualified citizens—and often contrasted it favourably with monarchy, rule by an individual. In later times, aristocracy was usually seen as rule by a privileged group, the aristocratic class, and was contrasted with democracy.[1]

The concept evolved in Ancient Greece, whereby a council of leading citizens was commonly empowered and contrasted with direct democracy, in which a council of citizens was appointed as the "senate" of a city state or other political unit. The Greeks did not like the concept of monarchy, and as their democratic system fell, aristocracy was upheld.[1]

In Ancient Rome, the Republic consisted of an aristocracy—as well as consuls, a senate, and a tribal assembly. In the Middle Ages and early modern era, aristocracies primarily consisted of an influential aristocratic class, privileged by birth, and often by wealth. Since the French Revolution, aristocracy has generally been contrasted with democracy, in which all citizens should hold some form of political power. However, this distinction is often oversimplified. The concept evolved in Ancient Greece, whereby a council of leading citizens was commonly empowered and contrasted with direct democracy, in which a council of male citizens was appointed as the "senate" of a city state or other political unit.

In his 1651 book Leviathan, Thomas Hobbes describes an aristocracy as a commonwealth in which the representative of the citizens is an assembly by part. It is a system in which only a small part of the population represents the government.[3] Modern depictions of aristocracy tend to regard it not as the ancient Greek concept of rule by the best, but more as a plutocracy—rule by the rich.[citation needed]