Arnulf of Carinthia (850 – 8 December 899) was the Carolingian King of East Francia[2] from 887, the disputed King of Italy from 894 and the disputed Holy Roman Emperor from 22 February 896 until his death at Regensburg, Bavaria.

Arnulf was the son of Carloman, King of Bavaria,[3] and his wife Liutswind,[4] who maybe was the sister of Ernst, Count of the Bavarian Nordgau Margraviate in the area of the Upper Palatinate, or perhaps the burgrave of Passau, as some sources say. After Arnulf's birth, Carloman married, before 861, a daughter of that same Count Ernst, who died after 8 August 879. As it is mainly West-Franconian historiography[5] that speaks of Arnulf's illegitimacy, it is quite feasible that the two females are one and the same person and that Carloman later on actually married Liutswind, thus legitimizing his son.[6]

Arnulf was granted the Duchy of Carinthia, a Frankish vassal state and successor of the ancient Principality of Carantania, by his father Carloman, after Carloman had become reconciled with his own father Louis the German and was created King of Bavaria. Arnulf spent his childhood on the Mosaburch or Mosapurc, which is widely believed to be Moosburg in Carinthia, only a few miles away from one of the Imperial residences, the Carolingian Kaiserpfalz at Karnburg, which before as Krnski grad had been the residence of the Carantanian princes. Arnulf kept his seat here and from later events it may be inferred that the Carantanians, from an early time, treated him as their own Duke. Later, after he had been crowned King of East Francia, Arnulf turned his old territory of Carinthia into the March of Carinthia, a part of the Duchy of Bavaria.

After Carloman was incapacitated by a stroke in 879, Louis the Younger inherited Bavaria, Charles the Fat was given the Kingdom of Italy and Arnulf was confirmed in Carinthia by an agreement with Carloman. Bavaria, however, was ruled more or less by Arnulf.[7] Arnulf had in fact ruled Bavaria during the summer and autumn of 879 while his father arranged his succession and he himself was granted "Pannonia," in the words of the Annales Fuldenses,[8] or "Carantanum," in the words of Regino of Prüm.[9] The division of the realm was confirmed in 880 on Carloman’s death.

When, in 882, Engelschalk II rebelled against the Margrave of Pannonia, Aribo, and ignited the so-called Wilhelminer War, Arnulf supported him and even accepted his and his brother's homage. This ruined Arnulf's relationship with his uncle the Emperor and put him at war with Svatopluk of Moravia. Pannonia was invaded, but Arnulf refused to give up the young Wilhelminers. Arnulf did not make peace with Svatopluk until late 885, by which time the Moravian was a man of the emperor. Some scholars see this war as destroying Arnulf's hopes at succeeding Charles.

Arnulf took the leading role in the deposition of his uncle, the Emperor Charles the Fat. With the support of the nobles, Arnulf held a Diet at Tribur and deposed Charles in November 887, under threat of military action.[10][11] Charles peacefully went into his involuntary retirement, but not without first chastising his nephew for his treachery and asking only for a few royal villas in Swabia, which Arnulf mercifully granted him,[12] on which to live out his final months.[3] Arnulf, having distinguished himself in the war against the Slavs was elected by the nobles of the realm (only the eastern realm, though Charles had ruled the whole of the Frankish lands) and assumed his title of King of East Francia.[13]

Arnulf took advantage of the problems in West Francia upon the death of Charles The Fat to secure the territory of Lorraine, which he converted into a kingdom for his son, Zwentibold.[14] In addition, in 889, Arnulf supported the claim of Louis the Blind to the kingdom of Provence, after receiving a personal appeal from Louis’ mother, Ermengard, who came to see Arnulf at Forchheim in May 889.[15] Recognising the superiority of Arnulf’s position, in 888 Odo of France formally admitted the suzerainty of Arnulf.[16] In 893, Arnulf switched his support from Odo to Charles the Simple after being persuaded by Fulk (Archbishop of Reims) that it was in his best interests.[17] Arnulf then took advantage of the fighting that followed between Odo and Charles in 894, taking territory from West Francia and transferring it to his dominion.[18] At one point, Charles was forced to flee to Arnulf and ask for his protection.[19] His intervention forced Pope Formosus to get involved, as he was worried that a divided and war weary West Francia would be easy prey for the Normans.[18]

In 895, Arnulf summoned both Charles and Odo to his presence at Worms. Charles’s advisers convinced him not to go, and he sent a representative in his place. Odo, on the other hand, personally attended, together with a large retinue, bearing many gifts for Arnulf.[20] Angered by the non-appearance of Charles, he welcomed Odo at the Diet of Worms in May 895, and again supported Odo's claim to the West Francian throne.[20] In this same assembly, he bestowed upon his illegitimate son Zwentibold, a crown as the King of Lotharingia.[20]

Arnulf was not a negotiator, but a fighter. In 890 he was successfully battling the Slavs in Pannonia.[21] In 891, the Danes invaded Lotharingia,[22] and crushed an East Frankish army at Maastricht.[23] At the decisive Battle of Leuven in September 891 in Lorraine, he repelled an invasion by the Normans (Northmen or Vikings),[23] essentially ending their invasions on that front.[3] The Annales Fuldenses report that the bodies of dead Northmen blocked the run of the river. After his victory, Arnulf built a new castle on an island in the Dijle river (Dutch: Dijle, English and French: Dyle).[24]

As early as 880, Arnulf had designs on Great Moravia, and had the Frankish bishop Wiching of Nitra interfere with the missionary activities of Methodius, with the aim of preventing any potential for creating a unified Moravian nation.[25] In 893 or 894, Great Moravia probably lost a part of its territory — present-day Western Hungary — to him. As a reward, Wiching became Arnulf’s chancellor in 892.[26] Arnulf, however, failed to conquer the whole of Great Moravia when he attempted it in 892, 893, and 899. Yet Arnulf did achieve some successes, in particular in 895, when Bohemia broke away from Great Moravia and became his vassal. An accord was made between him and the Bohemian Duke Borivoj I (reigned 870-95); Bohemia was thus freed from the dangers of invasion. However, in his attempts to conquer Moravia, in 899 Arnulf invited across the Magyars who had settled in Pannonia, and with their help he imposed a measure of control on Moravia.[27][27][28]

Like all early Germanic rulers, he was heavily involved in ecclesiastical disputes; in 895, at the Diet of Tribur, he presided over a dispute between the Episcopal sees of Bremen, Hamburg and Cologne over jurisdictional authority, which saw Bremen and Hamburg remain a combined see, independent of the see of Cologne.[29]

In Italy, the Iron Crown of Lombardy was being fought over between Guy III of Spoleto and Berengar of Friuli. Berengar had been crowned king in 887, but Guy was in his turn crowned in 889. While Pope Stephen V supported Guy, crowning him Roman Emperor in 891, Arnulf threw his support behind Berengar.[30]

In 893, a new pope, Formosus, not trusting the newly crowned co-emperors Guy and Lambert, sent an embassy to Omuntesberch, where Arnulf was holding a Diet with Svatopluk,[31] to request Arnulf come and liberate Italy,[32] where he would be crowned in Rome. Arnulf met the Primores of the Kingdom of Italy, dismissed them with gifts and promised to enter Italy.[33] Arnulf sent his son Zwentibold with a Bavarian army to join Berengar of Friuli. They defeated Guy, but were bought off and left in autumn. Arnulf then personally led an army across the Alps early in 894. In January 894 Bergamo fell, and Count Ambrose, Guy’s representative in the city, was hung from a tree by the city’s gate.[34]

Conquering all of the territory north of the Po, he forced the surrender of Milan and then drove Guy out of Pavia, where he was crowned King of Italy,[16] but went no further before Guy died suddenly in late autumn, and fever incapacitated his troops.[33] His march northward through the Alps was interrupted by Rudolph, King of Transjurane Burgundy, and it was only with great difficulty that Arnulf crossed the mountain range.[34] In retaliation, Arnulf ordered his illegitimate son Zwentibold to ravage Burgundy.[34] In the meantime, Lambert and his mother Ageltrude travelled to Rome to receive papal confirmation of his imperial succession, but Formosus, still desiring to crown Arnulf, was imprisoned in Castel Sant'Angelo.

In September 895, a new embassy arrived in Regensburg beseeching Arnulf's aid. In October, Arnulf undertook his second campaign into Italy.[33] He crossed the Alps quickly and took Pavia, but then he continued slowly, garnering support among the nobility of Tuscany. First Maginulf, Count of Milan, and then Walfred, Count of Pavia, joined him. Eventually even the Margrave Adalbert II abandoned Lambert. Finding Rome locked against him and held by Ageltrude,[33] he had to take the city by force on 21 February 896, freeing the pope.[35] Arnulf was greeted at the Ponte Milvio by the Roman Senate who escorted him into the Leonine City, where he was received by Pope Formosus on the steps of the Santi Apostoli.[35]

On 22 February 896, Formosus led the king into the church, anointed and crowned him, and saluted him as Augustus.[36] Arnulf then proceeded to the Basilica of Saint Paul Outside the Walls, where he received the homage of the Roman people,[35] who swore “never to hand over the city to Lambert or his mother Ageltrude”.[37] Arnulf then proceeded to exile to Bavaria two leading senators, Constantine and Stephen, who had helped Ageltrude seize the city.[38] Leaving one of his vassals, Farold, to hold Rome, Arnulf marched on Spoleto, where Ageltrude had fled to join Lambert.[37] On his way down, Arnulf suffered a stroke, forcing him to call off his campaign and return to Bavaria.[3]

Arnulf only retained power in Italy as long as he was personally there.[39][40] On his way north, he stopped at Pavia where he crowned his illegitimate son Ratold, sub-King of Italy, after which he left Ratold in Milan in an attempt to preserve his hold on Italy.[41] That same year, Formosus died, leaving Lambert once again in power, and both he and Berengar killed any officials who had been put in place by Arnulf, as Ratold also fled from Milan to Bavaria.[42] Rumours of the time made Arnulf's condition to be a result of poisoning at the hand of Ageltrude.[37] On his return to Germany, he exercised very little further control in Italy for the rest of his life, although his agents in Rome did not prevent the accession of Pope Stephen VI in 896.[43] Although he eventually became a supporter of the claims of Lambert, he initially gave his support to Arnulf.[44] 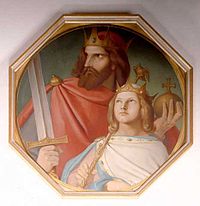 With his return to Germany in 896, Arnulf found that his physical ill health - he suffered from (morbus pediculosis – infestation of lice under the eyelid) - meant he was unable to deal with the problems besetting his reign. Italy was lost,[41] raiders from Moravia and Hungary were continually raiding his lands, and Lotharingia was in revolt against Zwentibold.[45] He was also plagued by escalating violence and power struggles between the lower German nobility.[46]

On Arnulf's death, he was succeeded as a king of the East Franks by his son by his wife Ota (died 903), Louis the Child.[47] When his only legitimate son, Louis the Child, died in 911 at age 17 or 18, the eastern (German) branch of the house of Charlemagne ceased to exist. Arnulf had the nobility also recognize the rights of his illegitimate sons Zwentibold and Ratold as his successors. Zwentibold, whom he had made King of Lotharingia in 895, continued to rule there until the next year (900).

Arnulf is entombed in St. Emmeram's Basilica at Regensburg, which is now known as Schloss Thurn und Taxis, the palace of the Princes of Thurn und Taxis.