Arrest warrants are issued by a judge or justice of the peace under the Criminal Code.

Once the warrant has been issued, section 29 of the Code requires that the arresting officer must give notice to the accused of the existence of the warrant, the reason for it, and produce it if requested, if it is feasible to do so. 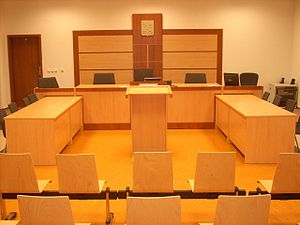 In the Czech Republic, the court must immediately hear the arrestee and within 24 hours either order remand or release him or her

Czech courts may issue an arrest warrant when it is not achievable to summon or bring in for questioning a charged person and at the same time there is a reason for detention (i.e. concern that the charged person would either flee, interfere with the proceedings or continue criminal activity, see Remand in the Czech Republic).[1]

The arrest is conducted by the police.[3] Following the arrest, the police must within 24 hours either hand the arrested person over to the nearest court or release the person.[4]

The court must immediately interview the arrested person, who has the right to have an attorney present, unless the attorney is not within reach. The court has 24 hours from the moment of receiving the person from the police to either order remand or to release him. Reaching the maximum time is always reason for immediate release.[5]

Interventions into the freedom of a person are only allowed through the Basic Law for the Federal Republic of Germany (German: Grundgesetz für die Bundesrepublik Deutschland) under certain conditions. In article 104 (Deprivation of liberty) the fundamental law determines that freedom confinements of more than one day may be directed only by a judge. Arrest warrants serve the enforcement of the proper expiry for instance in the Code of Criminal Procedure, but also in the civil procedure law and in the administrative law and the special administrative procedures after the Tax Code, the Finance Court order or the social court law.

(1) Every person shall have the right to free development of his personality insofar as he does not violate the rights of others or offend against the constitutional order or the moral law.

(2) Every person shall have the right to life and physical integrity. Freedom of the person shall be inviolable. These rights may be interfered with only pursuant to a law.
— Federal Republic of Germany, Basic Law[6]

The procedure for issuing arrest warrants differs in each of the three legal jurisdictions.

In England & Wales, arrest warrants can be issued for both suspects and witnesses.

Arrest warrants for suspects can be issued by a justice of the peace under section 1 of the Magistrates' Courts Act 1980 if information (in writing) is laid before them that a person has committed or is suspected of having committed an offence.[7] Such arrest warrants can only be issued for someone over 18 if:[7]

Arrest warrants for witnesses can be issued if:

In Scotland, a Warrant to Apprehend may be issued if a defendant has failed to appear in court.[9]

In Northern Ireland arrest warrants are usually issued by a magistrate.

For the police to make a lawful arrest, the arresting officer(s) must have either (1) probable cause to arrest, or (2) a valid arrest warrant.

A valid arrest warrant is one

These minimum requirements stem from the language contained in the Fourth Amendment. Federal statute and most jurisdictions mandate the issuance of an arrest warrant for the arrest of individuals for misdemeanors that were not committed within the view of a police officer. However, as long as police have the necessary probable cause, a warrant is usually not needed to arrest someone suspected of a felony in a public place; these laws vary from state to state.[10] In a non-emergency situation, an arrest of an individual in their home requires an arrest warrant.

Adequate showing of probable cause

Probable cause will be founded on either direct observations by the police officer, or on hearsay information provided by others to the police. The information brought by the police to the neutral and detached magistrate must establish that—considering the police officer's experience and training—the officer knows facts, either through personal observation or through hearsay information, that would suggest to a reasonable prudent person that the individual named in the warrant had committed or was committing a crime.

From 1964 to 1983, a constitutionally adequate affidavit comprised exclusively or primarily of hearsay information had to have contained information suggesting to the examining magistrate that (1) the hearsay declarant supplying the information to the police was a credible person, and (2) that the hearsay declarant had a strong basis of knowledge for the alleged facts.[11] Since 1983, a constitutionally sufficient affidavit must support a conclusion by a reviewing magistrate that the "totality of the circumstances" suggest that there is a fair probability that the facts relied on by the police to find probable cause to arrest are in fact valid; the magistrate will balance “the relative weights of all the various indicia of reliability (and unreliability) attending an informant's tip.”[12]

The individual issuing the arrest warrant need not be a judge or an attorney, but must be both capable of determining whether probable cause exists as well as be a neutral and detached official. While arrest warrants are typically issued by courts, they may also be issued by one of the chambers of the United States Congress or other legislatures (via the call of the house motion) and other political entities.

No known or reckless falsehoods

A warrant will be held invalid if the defendant challenging the arrest warrant can show, by a preponderance of the evidence, that specific parts of the affidavit submitted by the police are false; that the police either knowingly made them or made them with reckless disregard as to their truth or falsity; and that, excluding the false statements, the remaining portion of the affidavit would not have by itself established probable cause to arrest the defendant.[13]

The arrest warrant must, to comply with the Fourth Amendment, "particularly describe" the person to be seized. If the arrest warrant does not contain such a description, it is invalid—even if the affidavit submitted by the police or the warrant application contained this requisite information.[14]

A mittimus is a writ issued by a court or magistrate, directing the sheriff or other executive officer to convey the person named in the writ to a prison or jail, and directing the jailor to receive and imprison the person.

An example of the usage of this word is as follows: "... Thomas Fraser, Gregor Van Iveren and John Schaver having some time since been Confirmed by the Committee of the County of Albany for being Persons disaffected to the Cause of America and whose going at large may be dangerous to the State, Ordered Thereupon that a Mittimus be made out to keep them confined till such time as they be discharged by the Board or any other three of the Commissioners." Minutes of the Commissioners for detecting and defeating Conspiracies in the State of New York, Albany County Sessions,1778–1781. (Albany, New York: 1909) Vol. 1, Page 90

In police jargon, these writs are sometimes referred to as a writ of capias, defined as orders to "take" a person or assets. Capias writs are often issued when a suspect fails to appear for a scheduled adjudication, hearing, etc.

A bench warrant is a variant of an arrest warrant that authorizes the immediate on-sight arrest of the individual subject to the bench warrant. Typically, judges issue bench warrants for persons deemed to be in contempt of court—possibly as a result of that person's failure to appear at the appointed time and date for a mandated court appearance. Bench warrants are issued in either criminal or civil court proceedings.

Commonly (but not always), the person who is subject to a bench warrant has intentionally avoided a court appearance to escape the anticipated consequences of being found guilty of a crime. If a person was on bail awaiting criminal trial when the nonappearance took place, the court usually forfeits bail and may set a higher bail amount to be paid when the subject is rearrested, but normally the suspect is held in custody without bail. If a person has a bench warrant against him when stopped by a law enforcement officer, the authorities put them in jail and a hearing is held. The hearing usually results in the court setting a new bail amount, new conditions, and a new court appearance date. Often, if a person is arrested on a bench warrant, the court declares them a flight risk (likely to flee) and orders that person to be held without bail until further notice.

Bench warrants are traditionally issued by sitting judges or magistrates.

Some jurisdictions have a very high number of outstanding warrants. The vast majority in such American jurisdictions are for traffic related (non-violent) citations. The U.S. state of California in 1999 had around 2.5 million outstanding warrants, with nearly 1 million of them in the Los Angeles area.[15] The city of Baltimore, Maryland, had 100,000 as of 2007.[16] New Orleans, Louisiana, has 49,000.[17]

Some places have laws placing various restrictions on persons with outstanding warrants, such as prohibiting renewal of one's driver's license or obtaining a passport.