Arsia Mons is the southernmost of three volcanos (collectively known as Tharsis Montes) on the Tharsis bulge near the equator of the planet Mars. To its north is Pavonis Mons, and north of that is Ascraeus Mons. The tallest volcano in the solar system, Olympus Mons, is to its northwest. Its name comes from a corresponding albedo feature on a map by Giovanni Schiaparelli, which he named in turn after the legendary Roman forest of Arsia Silva.

Arsia Mons is a shield volcano with a relatively low slope and a massive caldera at its summit. The southernmost of the three Tharsis Montes volcanoes, it is the only major Tharsis volcano south of the equator.[1] 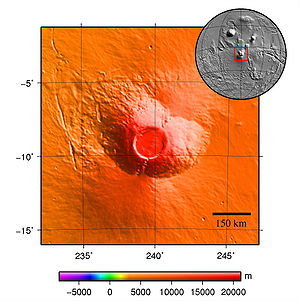 The volcano is 435 kilometres (270 mi) in diameter, almost 20 kilometres (12 miles) high (more than 9 kilometers (5.6 mi) higher than the surrounding plains[2]), and the summit caldera is 72 miles (approximately 110 km) wide.[3] It experiences atmospheric pressure lower than 107 pascals[4] at the summit. Except for Olympus Mons, it is the biggest volcano in volume. Arsia Mons has 30 times the volume of Mauna Loa in Hawaii, the largest volcano on the Earth.[5]

The caldera of Arsia Mons was formed when the mountain collapsed in on itself after its reservoir of magma was exhausted. There are many other geologic collapse features on the mountain's flanks.[6] The caldera floor formed around 150 Mya [7]

The shield is transected roughly northeast to southwest by a set of collapse features.[8] The collapse features on the shield are connected by a line of small shield volcanoes on the floor of the caldera. It is possible that this line represents a significant fault similar to others found on the Tharsis bulge. This fault may represent the source of the Arsia lavas.

The rift area to the southwest has been imaged in significant detail by the European Space Agency probe Mars Express. In 2004, a 3D map of this region was created at high resolution.[9] Cliffs, landslides, and numerous collapse features can be seen in this detailed image. Combined with the extensive lava flows at the termination of the rift, this may reveal areas that drained the caldera lavas and contributed to the collapse.

The northwest flank of the volcano is significantly different and rougher than the southeast flank, and the features may represent evidence of glaciers.[10]

The three Tharsis Montes, together with some smaller volcanoes to the north, form a rather straight line. It has been proposed that these are the result of plate tectonics, which on Earth makes chains of "hot spot" volcanoes. [11] [12] [13]

A repeated weather phenomenon occurs each year near the start of southern winter over Arsia Mons. Just before southern winter begins, sunlight warms the air on the slopes of the volcano. This air rises, bringing small amounts of dust with it. Eventually the rising air converges over the volcano's caldera and the fine sediment blown up from the volcano's slopes coalesces into a spiraling cloud of dust that is thick enough to observe from orbit. The spiral dust cloud over Arsia Mons repeats each year, but observations and computer calculations indicate it can only form during a short period of time each year. Similar spiral clouds have not been seen over the other large Tharsis volcanoes, but other types of clouds have been seen. The spiral dust cloud over Arsia Mons can tower 15 to 30 kilometres (9.3 to 18.6 mi) above the volcano.[14]

A study using a global climate model found that the Medusae Fossae Formation could have been formed from ash from the volcanoes Apollinaris Mons, Arsia Mons, and possibly Pavonis Mons.[15]

Recent work provides evidence for glaciers on Arsia Mons at both high[16] and low elevations .[10] A series of parallel ridges resemble moraines dropped by glaciers. Another section looks as if ice melted under the ground and formed a knobby terrain. The lower part has lobes and seems to be flowing downhill. This lobed feature may still contain an ice core that is covered with a thin layer of rocks to keep the ice from sublimating.[17]

As of 2007 seven putative cave entrances, have been identified in satellite imagery of the flanks of Arsia Mons.[18][19][20] They have been informally dubbed Dena, Chloë, Wendy, Annie, Abbey, Nikki, and Jeanne and resemble "skylights" formed by the collapse of lava tube ceilings. 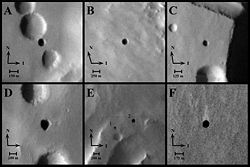 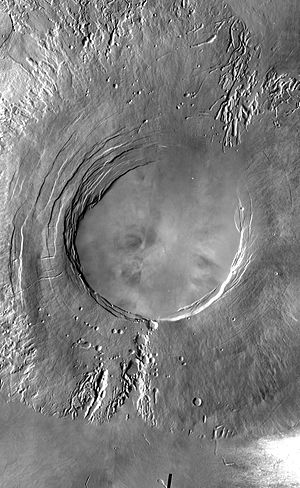 From day to night, temperatures of the circular features change only about one-third as much as the change in temperature of surrounding ground. While this is more variable than large caves on Earth, it is consistent with them being deep pits. However, due to the extreme altitude, it is unlikely that they will be able to harbour any form of Martian life.[21]

A more recent photograph of one of the features shows sunlight illuminating a side wall, suggesting that it may simply be a vertical pit rather than an entrance to a larger underground space.[22] Nonetheless, the darkness of this feature implies that it must be at least 178 meters deep.[23]

The southwest flank is the location of a significant portion of the science-fiction novel 'Ringclimber' .[24] The referenced chapters chronicle a ground expedition through the southwest flank and show 2D and 3D maps based on ESA data, using non-approved but standard compliant names for the various features in that region. The expedition summits at the caldera and observes the weather phenomenon mentioned above.

Arsia Mons is the location of Magma City, the domain of Adept Koriel Zeth and one of the main settings, in the Warhammer 40,000 novel 'Mechanicum'.