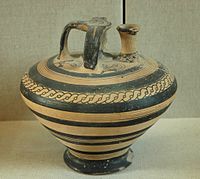 Mycenaean stirrup vase found in the acropolis of Ras Shamra (Ugarit), 1400-1300 BC

An artifact or artefact (from Latin phrase arte factum~ars skill + facere to make) is "something made or given shape by man, such as a tool or a work of art, esp an object of archaeological interest".[1] "Artifact" is the only spelling in American English, whilst "artefact" is generally preferred elsewhere[2] (see spelling differences).

In archaeology, however, the word has become a term of particular nuance and is defined as: an object recovered by archaeological endeavor, which may have a cultural interest. However, modern archaeologists take care to distinguish material culture from ethnicity, which is often more complex, as expressed by Carol Kramer in the dictum "pots are not people".[3]

Examples include stone tools, pottery vessels, metal objects such as weapons, and items of personal adornment such as buttons, jewelry and clothing. Bones that show signs of human modification are also examples. Natural objects, such as fire cracked rocks from a hearth or plant material used for food, are classified by archeologists as ecofacts rather than as artifacts.

Artifacts can come from any archaeological context or source such as:

Artifacts are distinguished from the main body of the archaeological record such as stratigraphic features, which are non-portable remains of human activity, such as hearths, roads, deposits, trenches or similar remains, and from biofacts or ecofacts, which are objects of archaeological interest made by other organisms, such as seeds or animal bone.

Natural objects which have been moved but not changed by humans are called manuports. Examples would include seashells moved inland or rounded pebbles placed away from the water action that would have fashioned them.

These distinctions are often blurred: for instance, a bone removed from an animal carcass is a biofact, but a bone carved into a useful implement is an artifact. Similarly there can be debate over early stone objects which may be crude artifacts or which may be naturally occurring phenomena that only appear to resemble early objects used by early humans or Homo sapiens. It can be difficult to distinguish the differences between actual man-made lithic artifacts and geofacts – naturally occurring lithics which resemble man-made tools. It is possible to authenticate artifacts by examining the general characteristics which are attributed to man-made tools and the local characteristics attributed to the site.[4]