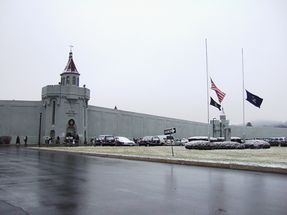 The Attica Correctional Facility is a maximum security/supermax New York State prison located in the town of Attica, New York,[1][2] operated by the New York State Department of Correctional Services. After it was constructed in the 1930s, it held many of the most dangerous criminals of the time. A tear gas system is installed in the mess hall and industry areas and has been used to quell conflicts in these areas. The prison now holds many inmates who are serving various types of sentences (short-term to life), and who are usually sent to the facility because of disciplinary problems in other facilities.[3] Joseph 'Mad Dog' Sullivan is the only man that has ever escaped the prison.[4]

Attica was the site of a prison riot in 1971 which resulted in 43 deaths, of which 33 were convicts and ten were correctional officers and civilian employees. One guard died by the hands of the rioting convicts in the early stages of the riot. The rest died by gunfire from state troopers and other retired guards.[5] One of the biggest reasons for the riot was overcrowding, but to this day Attica Correctional Facility is still over maximum capacity by double bunking a small portion of their population in the small cells which are designed to house only one inmate.[6]