From Infogalactic: the planetary knowledge core
Jump to: navigation, search
For other uses of "8-bit music", see chiptune. 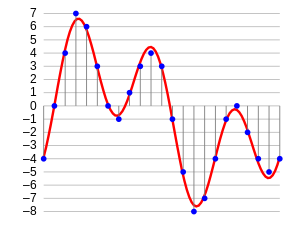 An analogue signal (in red) encoded to 4-bit PCM digital samples (in blue); the bit depth is 4, so each sample's amplitude is one of 16 possible values.

Bit depth is only meaningful in reference to a PCM digital signal. Non-PCM formats, such as lossy compression formats, do not have associated bit depths. For example, in MP3, quantization is performed on PCM samples that have been transformed into the frequency domain.

A PCM signal is a sequence of digital audio samples containing the data providing the necessary information to reconstruct the original analog signal. Each sample represents the amplitude of the signal at a specific point in time, and the samples are uniformly spaced in time. The amplitude is the only information explicitly stored in the sample, and it is typically stored as either an integer or a floating point number, encoded as a binary number with a fixed number of digits: the sample's bit depth.

The resolution of binary integers increases exponentially as the word length increases. Adding one bit doubles the resolution, adding two quadruples it and so on. The number of possible values that can be represented by an integer bit depth can be calculated by using 2n, where n is the bit depth.[1] Thus, a 16-bit system has a resolution of 65,536 (216) possible values.

Unlike integers, whose bit pattern is a single series of bits, a floating point number is instead composed of separate fields whose mathematical relation forms a number. The most common standard is IEEE floating point which is composed of three bit patterns: a sign bit which represents whether the number is positive or negative, an exponent and a mantissa which is raised by the exponent. The mantissa is expressed as a binary fraction in IEEE base two floating point formats.[9]

The bit depth limits the signal-to-noise ratio (SNR) of the reconstructed signal to a maximum level determined by quantization error. The bit depth has no impact on the frequency response, which is constrained by the sample rate.

Quantization noise is a model of quantization error introduced by the sampling process during analog-to-digital conversion (ADC). It is a rounding error between the analog input voltage to the ADC and the output digitized value. The noise is nonlinear and signal-dependent.

An 8-bit binary number (149 in decimal), with the LSB highlighted.

In an ideal ADC, where the quantization error is uniformly distributed between

least significant bit (LSB) and where the signal has a uniform distribution covering all quantization levels, the signal-to-quantization-noise ratio (SQNR) can be calculated from

where Q is the number of quantization bits and the result is measured in decibels (dB).[10][11]

24-bit digital audio has a theoretical maximum SNR of 144 dB, compared to 96 dB for 16-bit; however, as of 2007[update] digital audio converter technology is limited to a SNR of about 124 dB (21-bit)[12] because of real-world limitations in integrated circuit design. Still, this approximately matches the performance of the human auditory system.[13][14]

Most processing operations on digital audio involve requantization of samples, and thus introduce additional rounding error analogous to the original quantization error introduced during analog to digital conversion. To prevent rounding error larger than the implicit error during ADC, calculations during processing must be performed at higher precisions than the input samples.[17]

Fixed point digital signal processors often support unusual word sizes and precisions in order to support specific signal resolutions. For example, the Motorola 56000 DSP chip uses 24-bit word sizes, 24-bit multipliers and 56-bit accumulators to perform multiply-accumulate operations on two 24-bit samples without overflow or rounding.[18] On devices that do not support large accumulators, fixed point operations may be implicitly rounded, reducing precision to below that of the input samples.

Errors compound through multiple stages of DSP at a rate that depends on the operations being performed. For uncorrelated processing steps on audio data without a DC offset, errors are assumed to be random with zero mean. Under this assumption, the standard deviation of the distribution represents the error signal, and quantization error scales with the square root of the number of operations.[19] High levels of precision are necessary for algorithms that involve repeated processing, such as convolution.[17] High levels of precision are also necessary in recursive algorithms, such as infinite impulse response (IIR) filters.[20] In the particular case of IIR filters, rounding error can degrade frequency response and cause instability.[17]

The noise introduced by quantization error, including rounding errors and loss of precision introduced during audio processing, can be mitigated by adding a small amount of random noise, called dither, to the signal before quantizing. Dithering eliminates the granularity of quantization error, giving very low distortion, but at the expense of a slightly raised noise floor. Measured using ITU-R 468 noise weighting, this is about 66 dB below alignment level, or 84 dB below digital full scale, which is somewhat lower than the microphone noise level on most recordings, and hence of no consequence in 16-bit audio (see Programme level for more on this).

24-bit audio does not require dithering, as the noise level of the digital converter is always louder than the required level of any dither that might be applied. 24-bit audio could theoretically encode 144 dB of dynamic range, but based on manufacturer's datasheets no ADCs exist that can provide higher than ~125 dB.[21]

Dither can also be used to increase the effective dynamic range. The perceived dynamic range of 16-bit audio can be as high as 120 dB with noise-shaped dither, taking advantage of the frequency response of the human ear.[22]

Dynamic range is the difference between the largest and smallest signal a system can record or reproduce. Without dither, the dynamic range correlates to the quantization noise floor. For example, 16-bit integer resolution allows for a dynamic range of about 96 dB.

With the proper application of dither, digital systems can reproduce signals with levels lower than their resolution would normally allow, extending the effective dynamic range beyond the limit imposed by the resolution.[23]

The use of techniques such as oversampling and noise shaping can further extend the dynamic range of sampled audio by moving quantization error out of the frequency band of interest.

Oversampling is an alternative method to increase the dynamic range of PCM audio without changing the number of bits per sample.[24] In oversampling, audio samples are acquired at a multiple of the desired sample rate. Because quantization error is assumed to be uniformly distributed with frequency, much of the quantization error is shifted to ultrasonic frequencies, and can be removed by the digital to analog converter during playback.

For an increase equivalent to n additional bits of resolution, a signal must be oversampled by

For example, a 14-bit ADC can produce 16-bit 48 kHz audio if operated at 16x oversampling, or 768 kHz. Oversampled PCM therefore exchanges fewer bits per sample for more samples in order to obtain the same resolution.

Bit depth is a fundamental property of digital audio implementations and there are a variety of situations where it is a measurement.