From Infogalactic: the planetary knowledge core
Jump to: navigation, search
This article is about the college in Illinois. For other institutions with the same name or other uses of Augustana, see Augustana (disambiguation).

After 1890 an increasingly large Swedish American community in America promoted a new institutional structure, including a lively Swedish-language press, many new churches, several colleges, and a network of ethnic organizations. The result was to foster with pride a sense of Swedishness in the United States. Thereby there emerged a self-confident Americanized generation. Augustana College put itself in the lead of the movement to affirm Swedish American identity. Early on all the students had been born in Sweden but by 1890 the second generation of American-born students predominated. They typically had white-collar or professional backgrounds; few were the sons and daughters of farmers and laborers. These middle class youth developed an idealized view of Sweden, characterized by romanticism, patriotism, and idealism, just like their counterparts across the Atlantic. The new generation was especially proud of the Swedish contributions to American democracy and the creation of a republic that promised liberty and destroyed the menace of slavery.[4]

In 1947, the Augustana Seminary formally separated from Augustana College and became an independent body. It remained on the Rock Island campus until the 1960s, when the Seminary moved to Chicago.[5]

Augustana ranks among the top 40 U.S. liberal arts colleges in the sciences, based on the number of graduates earning Ph.D.s. Students accepted to Augustana typically rank in the top 30% of their high school classes. The middle 50 percent of enrolled students for the class of 2012 scored 24-29 on the ACT, well above the national averages. Augustana College is considered highly selective.[6] 73% of Augustana students graduate in four years and 78% graduate in six years.

The services offered through CORE (Careers, Opportunities, Research and Exploration) afford students an advantage in graduate school placement and the job market. Three distinguishing opportunities are: Augie Choice: $2000 offered to every student to support hands-on learning through research, an internship or international study The Viking Scorecard: a career and graduate school preparation guide A wide variety of faculty-led international programs ranging from 2 weeks to 3 months and covering all 7 continents 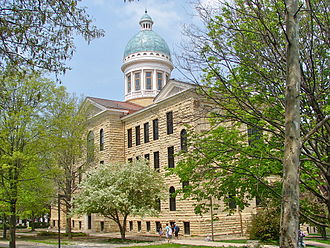 Old Main was constructed between 1884 and 1893. It is listed on the National Register of Historic Places.[7] On August 2, 2010, the New Science Building was officially named the Robert A. and Patricia K. Hanson Hall of Science after Robert Hanson, a former John Deere CEO. Hanson, who donated $8 million to the college, credits his success in life to his time spent at Augustana.[8] The science building, dedicated in 1998, is the largest academic building serving approximately 700 students in 17 majors, minors and concentrations.[9] The Hanson Hall of Science's facilities and resources include seven classrooms, 35 laboratories (including a cadaver lab), a 400 MHz liquid-and solid-state NMR (nuclear magnetic resonance) spectrometer, scanning electron microscope, instrumentation for X-ray powder crystallography and a fully functioning 40-foot greenhouse. 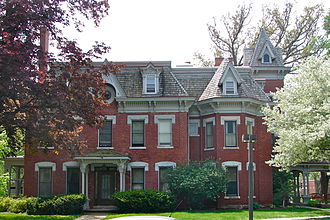 House on the Hill

Augustana has five traditional residence halls: Andreen Hall, Erickson Residence Center, Seminary Hall, Swanson Commons, and Westerlin Residence Center. All five of these residence halls are coeducational. The majority of first-year and sophomore-year students typically reside in one of these five residence halls.[10] For upperclassmen, Augustana also offers Transitional Living Areas (TLAs), apartment-like complexes or traditional off-campus houses administered by the college's Office of Residential Life, in which Augustana students live. The school takes care of basic maintenance in these areas, some of which are House on the Hill, Naeseth, and Arbaugh Apartments. These areas usually have 2-6 students who share a bathroom, a kitchen, and other living spaces.[11]

Th Fryxell Geology Museum, named after Augustana geologist Fritiof Fryxell, features a large collection of dinosaurs and fossils, rocks and mineral specimens.[12][13] Displays include a complete skeleton of a Tylosaurus "sea serpent", skulls of Parasaurolophus, Ankylosaurus, Apatosaurus, Allosaurus and Tyrannosaurus rex and a 2-billion-year-old fossil. There is also a complete 22-foot long skeleton of Cryolophosaurus, a large crested carnivorous dinosaur discovered in Antarctica in 1991 by Augustana paleontologist William Hammer. The museum is located in the Swenson Hall of Geosciences and is open during the academic year. Admission is free.

The Augustana Vikings compete in the NCAA Division III College Conference of Illinois and Wisconsin (CCIW). The Vikings compete in a combined total of 22 male and female team sports, and five out of seven students compete in some form of varsity, club, or intramural sport. Between 1983 and 1986, the Augustana College football team won four consecutive Division III national championships under Coach Bob Reade. Coach Reade's overall winning percentage of 87% is second only to Larry Kehres and Knute Rockne on the all-time list. Augustana College was a member of the Illinois Intercollegiate Athletic Conference from 1912-1937.[16]