The Autonomous University of Madrid (Spanish: Universidad Autónoma de Madrid) is commonly known by its Spanish initials UAM or as "la Autónoma". UAM is a Spanish public university established in 1968, along with the autonomous universities of Barcelona and Bilbao (now University of the Basque Country) during one of Spain's most ambitious educational reforms, which took place during the late 1960s and the early 1970s. Since 1971, the university's main campus has been located in Cantoblanco, a rural area in the northern outskirts of Madrid. Despite being part of the municipality of Madrid, the campus is nearer the towns of Alcobendas and Tres Cantos. Throughout its history, UAM has been one of Spain's most prominent higher education institutions, being ranked first amongst Spanish universities by the El Mundo University Supplement (known as "Las 50 Carreras"),[1] by The Times Higher Education Supplement, and by the Academic Ranking of World Universities yearly published by Shanghai Jiao Tong University.[2] For the subject "Mathematics" the university was ranked within top 51-75 universities in the world (within top 12 in Europe).[3] In the "Times Higher Education 100 Under 50 University Rankings", the University achieved 49th position globally in 2012.[4] In another similar ranking "QS Top 50 Under 50" by Quacquarelli Symonds (QS), the Autonomous University of Madrid recently achieved 15th place in international comparison.[5] Its Faculty of Law is the most prestigious one in Spain. It is the Spanish university with the most researchers among the most cited according to the Thomson Reuters ranking citation in 2011.

UAM's Cantoblanco Campus holds most of the university's facilities. It is located 15 km north of Madrid and has an extension of over 2,200,000 m². Of these are nearly 770,000 urbanised and about a third of them garden areas. The campus was designed as a university town that was to be self-sufficient, but also would be away from Madrid in order to keep student activity against the Francoist dictatorship away from the capital. 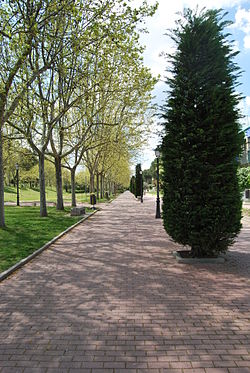 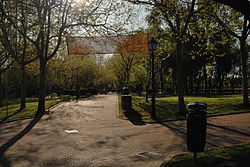 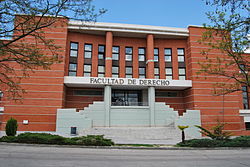 The original faculties were housed in interconnected buildings with several patios in between them. Characteristic of each building is a large number of stairs in its corridors, initially designed to prevent students from running in case of police raids. Currently, this fact has been considered by many university officials as a setback in the integration of handicapped students. The newest facilities were built in a contemporary style, being more accessible and allowing more free movement to students.

Sporting facilities include two swimming pools (an indoor one and an outdoor one), two multiple-use pavilions, and outdoor tennis, football, basketball, paddle tennis, rugby, and futsal and beach volleyball courts.

Other services on campus include 16 cafeterias and other eating facilities, medical services, a pharmacy with optic care, a foreign languages pavilion, and a bookstore. The campus also houses several research facilities partnered with the Spanish Scientific Research Council (CSIC).

Cantoblanco Campus is accessible by train belonging to Renfe Cercanias Commuter service (station Cantoblanco-Universidad), or by the Madrid Region Commuter Bus service. The campus is located in the B1 area of the Madrid Transports Consortium.

UAM faculty of medicine is located north of Madrid near La Paz teaching hospital (that acts as one of the faculty's teaching hospitals, as Puerta de Hierro Majdadhonda Hospital, La Princesa Hospital, Niño Jesús Hospital and Fundación Jiménez Díaz do). It was inaugurated in 1969. Juan Luis Vives Residence Hall was UAM's first residential facility. It is located in the Plaza Castilla area in northern Madrid. It has 130 residents and holds several cultural activities of the university.

"La Cristalera" residence is located in Miraflores de la Sierra, a village north of Madrid that was acquired by the university in 1989. It is used for conferences and meetings and is the main centre of UAM's summer courses. 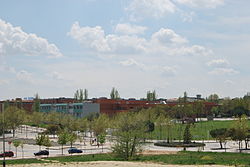 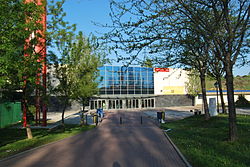 The UAM is divided into eight faculties and superior schools that support and coordinate most of the university's academic and administrative activity. Each faculty is divided into departments that coordinate the teaching and research of the different subjects. Researchers can organise into research institutes in order to coordinate their activities in a specific research field. The university totals up to 59 departments and eight research institutes. In addition to these, the UAM has seven associate schools, which are not completely part of UAM's administrative structure, but issue UAM-recognised titles and are under UAM's academic regulations. 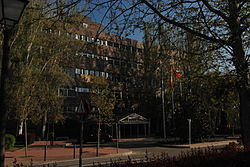 UAM administration is established according to the 2001's Organic Law of Universities (LOU). The Senior Academic and Administrative Officer of the Autonomous University of Madrid is the rector, who must be, by law, a chair professor serving in the university, elected every four years with a two-term limit by universal graded suffrage. The current rector is Prof. José Maria Sanz, chair of applied physics, who substituted his predecessor Angel Gabilondo in 2009, when Gabilondo became Minister of Education. To aid the rector in the management of the university, he or she appoints an indefinite number of vice-rectors leading different administrative departments of the university (such as Student affairs or Graduate academic affairs), and a secretary general coordinating the rector's team and overseeing the legal procedures of the university, as well as university protocol. The rector, in accordance with the university's social board, also designates the manager as part of his team, which oversees the university's economic and administrative activity.

The grades assigned to each sector for rectoral elections in UAM according to its charter are:

UAM's collective government bodies are the University Assembly, The Board of Governors, and The Social Board.

The University Assembly is made out of 153 full professors, 84 students, 27 hired, associate, or emeritus professors, 27 members of the non-teaching personnel, 9 research or teaching trainees, the rector, the secretary general, and the manager. It is the highest representative body of the university. It elaborates the university's general guidelines, changes or passes a new university charter, elects twenty members of the Board of Governors, and elects the University Ombudsman.

The Board Of Governors is the ordinary governmental body of the university. It controls and passes regulations on most of the university's academic, personnel, and administrative issues. It is composed of the rector, the secretary general, the manager, 20 members elected by the assembly according to its composition, all the deans and the head of the polytechnic school, 7 heads of department, a head of research institute, 15 members designated by the rector and three members of the Social Board.

The Social Board is the body responsible for the relations between university and society. Its members are designated by trade unions, the municipality of Madrid, employers unions, companies related to the university, the Madrid Assembly and the Board of Governors of the university. It also oversees the universities financial activities and passes the university budget. Its current chairman is Manuel Pizarro.

Faculties are headed by a dean, whilst the responsible of the polytechnic school is called head. They are elected in the same way as the rector and have also a limit of two four-year terms. They are aided by vice-deans or deputy heads. They are overseen by a faculty or school board. Departments are led by the head of department and overseen by the department council.

UAM offers Spanish undergraduates fully recognized degrees. There are the Diplomatura and Ingenierías Técnicas (technical engineering), which are three year studies equivalent to an associate degree. Licenciaturas and Ingenierías Superiores are four to five years studies equivalent to a bachelor's degree. Along with that, UAM offers second level licenciaturas, which allow people who have a diplomatura to obtain a licenciatura by taking courses. In other case, they must have at least the first two or three years of a licenciatura and combined degree, which are very popular among Spanish students. They also offer courses in languages other than Spanish 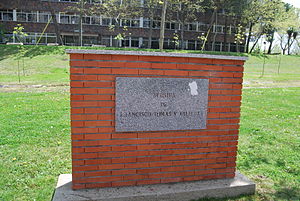 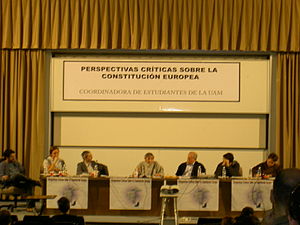 The Autonomous University of Madrid has an active student body, having organised one of the Spain's most important events against the dictatorship in 1976 called the Iberian Peoples Festival. It had an attendance of over 70,000. UAM has over a hundred student societies covering activities ranging from student unionism to theatre and music. The oldest active association in UAM is the Law Students Association (AED in Spanish), a left-leaning student union established in 1981. UAM does not have a formal student government body, as it has been rejected by students in several occasions, and instead students elect different student unions (usually with difference on political issues) to the different university government bodies.

In recent years, UAM students have organised massively to protest against terrorism, after the assassination of Prof. Francisco Tomas y Valiente by ETA in 1995, against the Organic Law of Universities in 2001, to clean Spain's northern coast after the Prestige oil spill in 2002, against the War in Iraq in 2003, to assist to the II European Social Forum also in 2003, and in solidarity with the victims of the 11 March 2004 Madrid train bombings.

UAM is also a festive campus, holding several festivals during spring. The most important one was the Spring festival held until 1993, but halted due to massification. Since then minor festivals have been held by student associations. These festivals usually consist of rock concerts by amateur rock bands (many of which have members that are UAM) from midday until dusk. According to university regulations, festival profits have to be destined to charities or to the organisation of cultural events. In 2005, due to massification of the festivals that led to several problems, university officials suspended further festivals until a more convenient place for their celebration would be found. Thus, no festivals were held in 2006.

In the early 1980s, a group of students noticed the day of Saint Canute in the month of January of the Catholic Calendar, whose translation in Spanish (canuto) is also one of the various names used for a spliff. Thus, they decided to celebrate an anti-prohibitionist festival. Throughout the years, the festival consisted of anti-prohibitionist lectures, film projections, and a central activity consisting of a procession of Saint Canute mocking Spanish Holy Week imagery that was held the third Thursday of June. Over the last years, due to the proximity of the autumn-winter semester exams, most of the activities were abandoned, leaving over a massive gathering. At the same time more people, especially from outside the university, were attending. This led to university authorities having to find a way to halt the festival.