An aviator badge is an insignia used in most of the world's militaries to designate those who have received training and qualification in military aviation. Also known as a Pilot’s Badge, or Pilot Wings, the Aviator Badge was first conceived to recognize the training that military aviators receive, as well as provide a means to outwardly differentiate between military pilots and the “foot soldiers” of the regular ground forces.

A United States Aviator Badge refers to three types of aviation badges issued by the United States military, those being for Army, Air Force, and Naval aviation.

In the modern military, Army and Air Force Aviator Badges are issued in three ratings: Basic, Senior, and Command/Master/Chief. The higher degrees are denoted by a star or star with wreath above the badge. Air Force regulations state that the basic rating denotes completion of specified training and that the advanced ratings denote experience levels. The Naval Aviator Badge is issued in a single rating for the Navy, Marine Corps, and Coast Guard.

Enlisted Aviators wore their regular rank insignia and the Observer's badge. There were 29 enlisted pilots before the American entry into World War I. The second enlisted aviator, William A. Lamkey, got a discharge and flew for Pancho Villa. The remaining enlisted pilots received commissions in 1917. There were 60 enlisted mechanics who were trained as pilots in France during the war, but they were used for ferrying duties and did not fly in combat.[2] The recruiting and training of enlisted Aviators ended in 1933.

During World War II, with the rise of the Army Air Forces, a second series of aviator badges were issued to include a design that has survived to the modern day. The Army Air Corps Pilot Badge was issued in three degrees, including Pilot, Senior Pilot, and Command Pilot. A polished silver colored version of these badges is currently used as the United States Air Force Pilot Badges.

From August 1941 to November 1942, the Enlisted Aviator program was restarted. Candidates had to be at least 18, possess a high school diploma, and have graduated at the top of their High School class. Graduates were rated as Flight Staff Sergeants or Flight Technical Sergeants and wore the same pilot's wings as officers. They were usually assigned to pilot transport and auxiliary aircraft to free officer pilots to pilot the more prestigious fighters and bombers. Auxiliary pilots received their own special wings to indicate their status and specialty. In November 1942 all enlisted pilots were promoted to Flight Officer rank and enlisted cadets were graded as Flight Officers or Second Lieutenants depending on merit.

After the creation of the U.S. Air Force as a separate service in 1947, Army Aviation continued to a degree that warranted a new badge for Army Aviators. The result was the creation of the Army Aviator Badge, which is a modified version of the U.S. Air Force Pilot Badge. It comes in three grades: Basic, Senior (7 years service and 1,000 flight hours), and Master (15 years service and 2,000 flight hours).[3] The Aviator and Senior Aviator Badges were approved on 27 July 1950 and the Master Aviator Badge was approved on 12 February 1957.

In 1947, the U.S. Army Air Corps-cum-U.S. Army Air Forces became its own separate service as the U.S. Air Force. The Air Force use the same pilot's badges as the earlier USAAC / USAAF design except that starting in the mid-1990s, they began to be made of chrome metal or sterling silver rather than the dull alloy wings used by the Army or the Air Force from 1947 to the mid-1990s. The U.S. Air Force currently issues several aviation badges including pilot, combat systems officer (formerly navigator), air battle manager, flight surgeon, flight nurse, non-rated officer aircrew, and enlisted aircrew. The requirements to earn these are listed here.

The NOAA Commissioned Corps Aviator Insignia is a gold-colored pin, winged, with a central device consisting of a fouled anchor surcharged with a NOAA Corps device. NOAA Corps officer pilots and navigators may wear the NOAA aviator insignia after authorization by the Director of the NOAA Corps.

With the dawn of the Space Age, all of the United States Aviator badges are upgradable to the Astronaut Badge, for those military members who become astronauts.

The current aviator badge of the Royal Air Force has been in use since the Second World War. The badge consists of a winged crown and wreath, beneath which are the letters "RAF". The Royal Air Force also uses a "half wing" version to denote Aviation Observers.

In the RAF, pilots wear the letters "RAF" in a brown wreath, surmounted by a crown, with a wing on each side (pilots' brevets are often referred to as "wings"). UAV pilots have similar wings except with a light blue wreath. From April 2003, weapons systems officers/operators are awarded a similar brevet with a single wing. Other aircrew wear a letter or letters (denoting speciality) in a wreath, with a single wing. The only other brevets currently worn are "E" (air engineer), "AT" (airborne technician), "IA" (imagery analyst) and "FC" (fighter controller). Parachute jumping instructors (PJIs) wear an open parachute instead of a letter. Brevets prior to 2003 (when roles became represented by the single WSO brevet) include "N" (navigator), "LM" (air loadmaster), "AE" (air electronics operator), "B" (bomb aimer), "AG" (air gunner), "AS" (air steward) which was replaced with a brevet with "CC" (cabin crew), this brevet was unusual for aircrew as it is worn on the right sleeve in the same location as parachute qualification, has two up turned wings, similar to Royal Navy rating's aircrew badges and has cream stitching for the wings, lettering and laurels (other brevets the laurels are bronze or blue for the remotely controlled aircraft such as reaper, where the laurels are blue), "M" (meteorological observer), "QM" (air quartermaster), "S" (air signaller), and "RO" (radio observer). observers wore a single wing attached directly to the letter "O". Some of these now obsolete brevets can still be worn (LM, E, S, AS and AE) by serving aircrew however, provided it was the brevet with which they were initially awarded with the exception of the observers brevet which was replaced by the navigator's brevet in 1942, AG and B have also been obsolete for several decades, where as M and QM were phased out in the 1970s or 1980s.

The Royal Navy's Fleet Air Arm has its own wings design, featuring albatross wings instead of the wings of a swift, as per the RAF design. For observers, a clipped version is used featuring shorter wings, possibly from a different sea-bird. The Fleet Air Arm wings badges feature albatross wings, a crown and anchor, reflecting the naval aspect of the flying undertaken. They are worn on the sleeve of naval aviators, above the rank "rings" as opposed to on the left breast of RAF uniforms. They are awarded after the completion of all aspects of flight training, and on gaining a position in a frontline squadron. 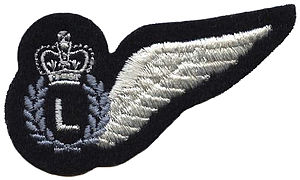 Royal Australian Air Force brevets differ from those in the RAF mainly in having a crown on all brevets (not just on pilot's wings) and in normally having blue wreaths. The pilot's brevet has the letters "RAAF". A similar twin-wing brevet, bearing the Southern Cross, was introduced for officer aircrew in 1998, replacing various single-wing brevets previously worn by commissioned officers;[4] however NCO aircrew continue to wear the old single-wing brevets.

Most RAAF pilots signed a petition in 1998/1999 in protest of non-pilot "officer aircrew" receiving a double wing. For the most part this was supported by serving navigators and war veterans who had previously held the soon to be abolished 'half' wing. The petition ultimately had over 10,000 signatures, but in the end the petition was unsuccessful.[5]

New Zealand uses similar insignia to the United Kingdom, except the pilot's wings bear the letters "NZ" instead of "RAF" and the single wing of other aircrew still have the letters of the trade they represent. Currently these are air warfare officer and specialist (AW), air engineer (E), air loadmaster (LM), helicopter crewman (HC), flight steward (FS), air ordnanceman (AO), and parachute jump instructor (a parachute). Air electronics operator (AE) is obsolete.

The current aviator badge of the Belgian Airforce is:

The aviator badge of the Royal Danish Air Force is:

The Pilotenabzeichen (Pilot's Badge) of the former Luftwaffe came in three distinct types; bronze, silver (changed to zinc during the war) and gold. It depicts a silver eagle (Silberner Adler) perched atop a swastika (Hakenkreuz), wings open in a landing pose, and surrounded by a wreath with laurel (Lorbeer) and oak (Eichenlaub) branches on the left and right, respectively. Which badge a pilot received depended on how well the pilot did on the final exam.

In the Bundeswehr the aviation badge (Tätigkeitsabzeichen Militärluftfahrzeugführer) comes in three grades: bronze (Standard Pilot), silver (Senior Pilot) after 1200 flight hours and gold (Command Pilot) after 1800 flight hours. It depicts the Bundesadler surrounded by an oak leaf wreath between two wings. It is worn above the right breast pocket. A total of two Tätigkeitsabzeichen may be worn, one of which can be foreign in which case the foreign one would be worn below the German one.[6]

Pilots and navigators of the Royal Hungarian Air Force wore their aviator rating badge sawn on their uniforms right breast above the pocketflap. The Observers Badge was the same, except without the Holy Crown of Hungary. A smaller version of the pilot’s badge which was worn on the lower left sleeve of the overcoat - observers also worn a small insignia without the srown on their sleeve.[7] During the World War II a goldified bronze pilot and observer badge was also introduced.

The current badge of a pilot in the Israeli defense forces is:

The current aviator badge of the Polish Air Force has been in use since the 1920s. The badge is called gapa and represents silver eagle in flight with gold laurel wreath in the bill. Navigator/Observer badge (below) represents the same eagle, but in gold with added lightning bolts. It is unlike any other in the other air forces in the world. The gapa was worn in the usual place on the upper left breast above the pocket, but with a chain. It proudly adorned the uniform of Polish Air Force officers in the RAF during World War II along with their RAF wings. In combat badges (for at least 7 flights in combat conditions) the laurel wreath is green.

The current aviator badge of the South African Air Force has been in use since 2002, when South Africa adopted a new coat of arms. Like the RAF, the SAAF also has a half-wing version of the badge, in this case for navigators. The aviator and navigator badges comes in three grades: bronze, silver and gold. Reserve force aviator badges have a light blue inlay around the coat of arms as appose to the dark blue of permanent air force aviators.