The Avro 504 was a World War I biplane aircraft made by the Avro aircraft company and under licence by others. Production during the War totalled 8,970 and continued for almost 20 years,[1] making it the most-produced aircraft of any kind that served in World War I, in any military capacity, during that conflict. Over 10,000 were built from 1913 to the time production ended in 1932.[citation needed]

First flown on 18 September 1913,[2] powered by an 80 hp (60 kW) Gnome Lambda seven-cylinder rotary engine, the Avro 504 was a development of the earlier Avro 500, designed for training and private flying. It was a two-bay all-wooden biplane with a square-section fuselage. 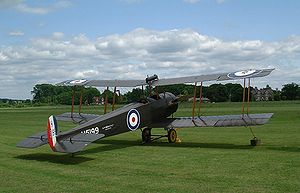 Small numbers of early aircraft were purchased both by the Royal Flying Corps (RFC) and the Royal Naval Air Service (RNAS) prior to the start of World War I, and were taken to France when the war started. One of the RFC aircraft was the first British aircraft to be shot down by the Germans, on 22 August 1914. The pilot was 2nd Lt. Vincent Waterfall and his navigator Lt Charles George Gordon Bayly (both of 5 Sqn RFC)[3][4] The RNAS used four 504s to form a special flight in order to bomb the Zeppelin works at Friedrichshafen on the shores of Lake Constance. Three set out from Belfort in north-eastern France on 21 November 1914, carrying four 20 lb (9 kg) bombs each. While one aircraft was shot down, the raid was successful, with several direct hits on the airship sheds and the destruction of the hydrogen generating plant.[5]

Soon obsolete as a front-line aircraft, it came into its own as a trainer, with thousands being built during the war, with the major production types being the 504J and the mass production 504K, designed with modified engine bearers to accommodate a range of engines in order to cope with engine shortages. 8,340 Avro 504s had been produced by the end of 1918.[6]

In the winter of 1917–18 it was decided to use converted 504Js and 504Ks to equip Home Defence squadrons of the RFC, replacing ageing B.E.2cs, which had poor altitude performance. These aircraft were modified as single-seaters, armed with a Lewis gun above the wing on a Foster mounting, and powered by 100 hp (75 kW) Gnome or 110 hp (80 kW) Le Rhône engines. 274 converted Avro 504Js and Ks were issued to eight home defence squadrons in 1918, with 226 still being used as fighters at the end of World War I.[7]

Following the end of the war, while the type continued in service as the standard trainer of the RAF, large numbers of surplus aircraft were available for sale, both for civil and military use. More than 300 504Ks were placed on the civil register in Britain. Used for training, pleasure flying, banner towing and even barnstorming exhibitions (as was ongoing in North America following World War I with the similar-role, surplus Curtiss JN-4s and Standard J-1s); civil 504s continued flying in large numbers until well into the 1930s.

The embryonic air service of the Soviet Union formed just after World War I used both original Avro 504s and their own Avrushka (" Little Avro") copy of it for primary training as the U-1 in the early 1920s, usually powered with Russian-made copies of the Gnome Monosoupape rotary engine. This Russian version of the 504 was replaced by what would become the most produced biplane in all of aviation history, the Polikarpov Po-2, first known as the U-2 in Soviet service in the late 1920s.

Although Avro 504s sold to China were training versions, they participated in battles among warlords by acting as bombers with the pilot dropping hand grenades and modified mortar shells[citation needed].

The improved, redesigned and radial engined 504N with a new undercarriage was produced by Avro in 1925. After evaluation of two prototypes, one powered by the Bristol Lucifer and the other by the Armstrong-Siddeley Lynx, the Lynx powered aircraft was selected by the RAF to replace the 504K. 592 were built between 1925 and 1932, equipping the RAF's five flying training schools, while also being used as communication aircraft. The 504N was also exported to the armed forces of Belgium, Brazil, Chile, Denmark, Greece, Thailand and South Africa, with licensed production taking place in Denmark, Belgium, Canada and Japan.

The RAF's 504Ns were finally replaced in 1933 by the Avro Tutor, with small numbers continuing in civilian use until 1940, when seven were impressed into RAF service, where they were used for target- and glider-towing.

The 504 was the first aeroplane to strafe troops on the ground[8] as well as the first to make a bombing raid over Germany.[1] It was also the first Allied aeroplane to be downed by enemy anti-aircraft fire and was Billy Bishop's first army aircraft.

The 504 is easily recognisable because of the single skid between the wheels, referred to as the "tooth pick" in the RAF.

Single-seat anti-zeppelin aircraft for the RNAS. The 504C was fitted with an extra fuel tank, in place of the observer.

Hybrid trainer based on 504K fuselage with 504N undercarriage and wings and powered by rotary engine. Built under licence in Mexico as Avro Anahuac.[9]

Floatplane version of 504N. First aircraft to fly above the Arctic Circle in 1923 Oxford Expedition.

Unbuilt version of the 504N with side-by-side seating.[10]

Three-seat cabin biplane. The 504Q was built for the Oxford University Arctic Expedition. Only one was ever built, powered by an Armstrong Siddeley Lynx engine.

Two-seat training aircraft. Built under licence in Japan by Nakajima.

A small number of static display, and airworthy examples of the Avro 504 exist, more than a century after the first one flew, one of the airworthy examples being the Shuttleworth Collection's example.[14] Another flyable example exists in a Canadian aviation museum. An Avro 504K can also be found on static display in the Making of the Modern World Gallery at the London Science Museum.[15]

The Military Aviation Museum of Pungo, Virginia, USA also has a flyable reconstruction aircraft in its collection. The Avro (A. V. Roe) 504K "H5991" is presented in Royal Flying Corps colors.

Data from The Encyclopedia of World Aircraft[21]

The following companies are recorded as manufacturing the Avro 504 under licence.[23][24]