From Infogalactic: the planetary knowledge core
Jump to: navigation, search
This article is about a bone named the axis. For an anatomical axis such as AP or ML, see Anatomical terminology § Axes.

In anatomy, the second cervical vertebra (C2) of the spine is named the axis (from Latin axis, "axle") or epistropheus.

It forms the pivot upon which the first cervical vertebra (the atlas), which carries the head, rotates.

The most distinctive characteristic of this bone is the strong odontoid process known as the dens which rises perpendicularly from the upper surface of the body. That peculiar feature gives to the vertebra a rarely used third name: vertebra dentata. In some judicial hangings the odontoid process may break and hit the medulla oblongata, causing death.

The body is deeper in front than behind, and prolonged downward anteriorly so as to overlap the upper and front part of the third vertebra.

It presents in front a median longitudinal ridge, separating two lateral depressions for the attachment of the Longus colli muscles.

Its under surface is concave from before backward and convex from side to side. 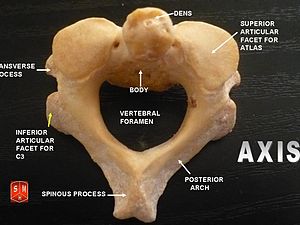 The dens, also odontoid process or peg, is the most pronounced feature, and exhibits a slight constriction or neck where it joins the main body of the vertebra. The dens is a protuberance (process or projection) of the axis (second cervical vertebra). The condition, where the dens is separated from the body of the axis, is called os odontoideum, and may cause nerve and circulation compression syndrome. On its anterior surface is an oval or nearly circular facet for articulation with that on the anterior arch of the atlas. On the back of the neck, and frequently extending on to its lateral surfaces, is a shallow groove for the transverse atlantal ligament which retains the process in position. The apex is pointed, and gives attachment to the apical odontoid ligament; below the apex the process is somewhat enlarged, and presents on either side a rough impression for the attachment of the alar ligament; these ligaments connect the process to the occipital bone.

The internal structure of the odontoid process is more compact than that of the body. The odontoid peg is the ascension of the atlas fused to the ascension of the axis. The peg has an articular facet at its front and forms part of a joint with the anterior arch of the atlas. It is a non-weight bearing joint. The alar ligaments, together with the apical ligaments, are attached from the sloping upper edge of the odontoid peg to the margins of the foramen magnum. The inner ligaments limit rotation of the head and are very strong. The weak apical ligament lies in front of the upper longitudinal bone of the cruciform ligament, and joins the apex of the deltoid peg to the anterior margin of the foramen magnum. It is the fibrous remnant of the notochord.

The pedicles are broad and strong, especially in front, where they coalesce with the sides of the body and the root of the odontoid process. They are covered above by the superior articular surfaces.

The laminae are thick and strong, and the vertebral foramen large, but smaller than that of the atlas.

The transverse processes are very small, and each ends in a single tubercle; each is perforated by the transverse foramen, which is directed obliquely upward and laterally.

The superior articular surfaces are round, slightly convex, directed upward and laterally, and are supported on the body, pedicles, and transverse processes.

The inferior articular surfaces have the same direction as those of the other cervical vertebrae.

The spinous process is large, very strong, deeply channelled on its under surface, and presents a bifurcated extremity.

Contact sports are contraindicated for individuals with an anomalous dens, as any violent impact may result in a catastrophic injury.[1] This is because a malformed odontoid process may lead to instability between the atlas and axis (the C1 and C2 cervical vertebrae).

The axis is ossified from five primary and two secondary centers.

The axis is ossified from five primary and two secondary centers.

The body and vertebral arch are ossified in the same manner as the corresponding parts in the other vertebrae, viz., one center for the body, and two for the vertebral arch.

The dens or odontoid process consists originally of a continuation upward of the cartilaginous mass, in which the lower part of the body is formed.

About the sixth month of fetal life, two centers make their appearance in the base of this process: they are placed laterally, and join before birth to form a conical bilobed mass deeply cleft above; the interval between the sides of the cleft and the summit of the process is formed by a wedge-shaped piece of cartilage.

The base of the process is separated from the body by a cartilaginous disk, which gradually becomes ossified at its circumference, but remains cartilaginous in its center until advanced age.

The apex of the odontoid process has a separate center which appears in the second and joins about the twelfth year; this is the upper epiphysial lamella of the atlas.

In addition to these there is a secondary center for a thin epiphysial plate on the under surface of the body of the bone. 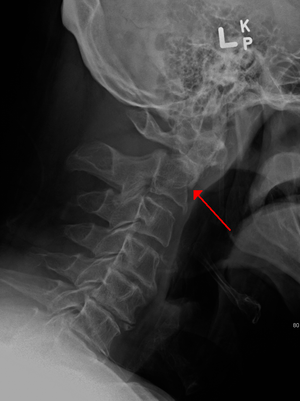 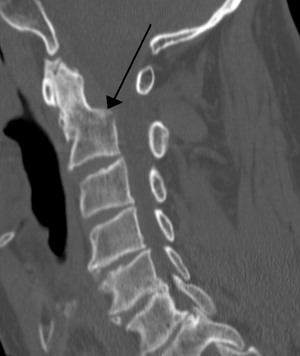 Fractures of the dens, not to be confused with Hangman's fractures, are classified into three categories according to the Anderson–D'Alonso system: