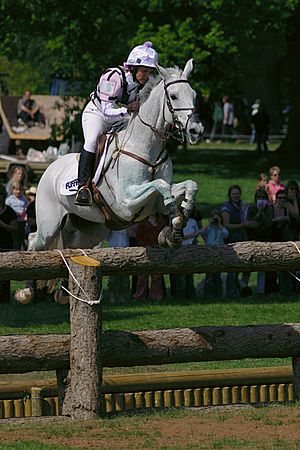 The Badminton Horse Trials is a three-day event, one of only six annual Concours Complet International (CCI) Four Star **** events as classified by the Fédération Équestre Internationale (FEI). It takes place in April or May each year in the park of Badminton House, the seat of the Duke of Beaufort in South Gloucestershire, England.

Badminton was first held in 1949 by the 10th Duke of Beaufort in order to let British riders train for international events, and was advertised as "the most important horse event in Britain". It was the second three-day event held in Britain, with the first being its inspiration – the 1948 Olympics. The first Badminton had 22 horses from Britain and Ireland start, and was won by Golden Willow. Eight of the 22 starters failed to complete the cross-country course. Badminton was the home of the first European Championship in 1953, won by Major Laurence Rook on Starlight XV. In 1955, Badminton moved to Windsor Castle for a year, at the invitation of the Queen, in order to hold the second European Championships. Badminton was first televised in 1956.

In 1959, Badminton was held in two sections, called the Great and Little Badminton, due to the popularity of the event and the number of entries. The horses in the two sections jumped the same fences, but were separated into the two divisions based on their money winnings. This graded approach was abandoned after the 1965 event.[1] In 1989, the current director and course-designer Hugh Thomas, who rode in the 1976 Montreal Olympics,[2] took over from Frank Weldon, a former winner,[3] who is credited with bringing the event to the pinnacle it is at today.

Badminton is held in the 6 square kilometre (1500 acre) Badminton Park, where the car parks, tradestands, arena and cross country courses are located.

Together with the four-star rated Rolex Kentucky Three Day and the Burghley Horse Trials, Badminton forms the Rolex Grand Slam of Eventing. The only person ever to win the Grand Slam is Pippa Funnell. Australian Andrew Hoy nearly took the title in 2007 but lost it when he had a pole down at Burghley.[6] The remaining CCI**** rated events are the Luhmühlen Horse Trials, the Australian International Three Day Event and the Stars of Pau. It is also now part of the HSBC FEI Classics—a points-based system containing the CCI**** events.[7]

The cross-country day at Badminton attracts crowds of up to a quarter of a million and is the second largest for money made in the world (after the Indianapolis 500).[8][9]

The event has been won by the following riders and horses:[10]

In 2007, after a long period without rain, the ground was considered to be too hard, resulting in 22 withdrawals. [16]