Bahubali (English: One With Strong Arms) was the son of Rishabhanatha, the first tirthankara of Jainism.[2][3][4] Bahubali is a much revered figure among Jains. After the duel with Bharata, his elder brother, Bahubali abandoned his kingdom and clothes to became a Jain monk.[5] Bahubali meditated motionless for a whole year in kayotsarga posture because of which climbers grew around his legs.[6] After one year of meditation, Bahubali attained Kevala Jnana (enlightenment). According to Jain texts, Bahubali attained moksha (liberation from the cycle of births and deaths) at Mount Kailash and became a Siddha (liberated soul).[7]

Bahubali is also called Gommatesh because of the statue dedicated to him. "Gommateshwara" statue, built by the Ganga dynasty minister and commander Chavundaraya, is a 57-foot (17 m) monolith (statue carved from a single piece of rock) and is situated above a hill in Shravanabelagola, in the Hassan district of Karnataka state, India. It was built in around 983 A.D. and is one of the largest free standing statues in the world.[2][8]

The Ādi purāṇa, a 9th-century Sanskrit poem, deals with the ten lives of the first tirthankara, Rishabha and his two sons, Bharata and Bahubali. It was composed by Jinasena, a Digambara Jain monk. A 10th-century Kannada text based on the Sanskrit text was written by the poet Adikavi Pampa.[9][10]

According to Jain texts, when Rishabha decided to become a monk he distributed his kingdom into his 100 sons, Bharata of whom got the city of Vinita (Ayodhya) and Bahubali got the city of Podanapur (Taxila).[11][12][13] After returning from the world conquest, Bharata demanded submission from his own brothers.[14] While his 98 brothers agreed and submitted their kingdoms to him without any opposition, Bahubali defied Bharata and challenged him for a fight.[15]

The brothers themselves, cannot be killed by any means; they are in their last incarnations in transmigration, and possess bodies which no weapon may mortally wound in warfare! Let them fight out the issue by themselves in other ways.

It was then decided that to settle the dispute, three kinds of contests can be held between Bharata and Bahubali. These were, staring at each other (eye-fight), water-fight (Jala Yudh) and wrestling (Mala Yudh). Bahubali won all the three contests from his elder brother, Bharata.[16] 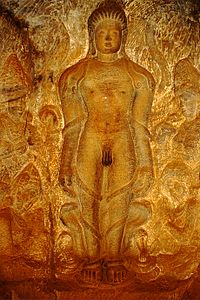 During the last duel of wrestling, Bahubali raised his hand and immediately a thought stoke him "What am I doing? Am I going to kill my own brother for mundane things like kingdom and wealth? I, the son of Lord Rishabhanatha, who left everything in the search of eternal truth, have fallen down to such an extent that I am about to kill my own brother for the kingdom that my father once left?" Thus Bahubali was filled with disgust for the world and developed a desire for renunciation. Bahubali abandoned his clothes and kingdom to became a monk.[5] Bahubali began meditating alone. He refrained going to his father, Lord Rishabha as he thought that he might have to bow down in front of his 98 younger brothers who had become monks before him. He thus began his austerities alone with great resolve to attain Kevala Jnana but he couldn't succeed as the thought that he is standing on Bharata's land troubled him.[17]

However, Bahubali was adamant and continued his practice unmindful of the vines, ants, and dust which enveloped his body. At the end of one year, Bharata himself came to worship Bahubali with veneration and respect. Bahubali was then able to destroy four kinds of inimical karmas and immediately became an arihant. A human being who has destroyed all inner passions like anger, attachment, greed and pride and possess kevala jnana the ultimate Enlightenment is revered as an Arihant.[18] Bahubali finally attained Nirvana/moksha and became a siddha, i.e.,a soul at its purest form.[19] 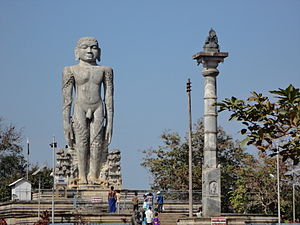 There are 5 monolithic statues of Bahubali in Karnataka measuring more than 6 m (20 feet) in height.

The Bahubali Atishayakshetra with Bahubali in standing posture is situated on about 50 steps up and 8.5 m (28 feet) in high at Kumbhoj, Kolhapur, Maharashtra.

A 6.4 m (21 feet) tall statue of Bahubali was built at Gommatgiri, 14 kilometres north of Indore, on the Airport road. It is a good miniature copy of the original statue at Shravanabelagola.

The colossal monolithic statue of Bahubali at Shravanabelagola is 158 km away from Bangalore. This gigantic statue of Bahubali is carved out of a single block of granite and stands majestically on top of a hill. For centuries, Shravanabelagola has remained a great tirtha (pilgrimage center) and thousands of pilgrims flock to see the magnificent, gigantic statue. It is 17 m. (55 ft) high and is visible from a distance of 30 km. 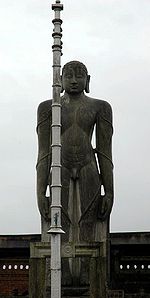 Karkala is a town and also the headquarters of Karkala Taluk in Udupi District of Karnataka, India, and is located about 38 km from Udupi and about 480 km from Bangalore. About, 52 km. North-east of Mangalore, is known primarily for the statue of Lord Bahubali (Gomateshwara).

Karkala is well known for its massive 42 feet monolithic statue of Gomateshwara Bahubali, believed to have been built around 1432 AD. This is a male figure in a kayotsarga posture approached by a number of rock-cut steps. Veerapandya Bhairava Raja built this monolithic statue in his honor. A festival with all mighty known as Maha Masthakaabhisheka, sacred bathing of the statue with saffron paste, milk and water, held in every 12 years. During this period thousands of Jain devotees visit this place to carry out the Mahamastakabhisheka. This statue is an awesome sight and is the second tallest in the State.

An ancient Jain temple of Bahubali dated 8th Century AD was discovered in Arathipura, Maddur, Mandya, Karnataka by Archaeological Survey of India. The statue of Bahubali, discovered in the excavations, is 3 feet wide and 3.5 feet tall.[20]