From Infogalactic: the planetary knowledge core
Jump to: navigation, search
Not to be confused with Adolph Bandelier or Bandolier.

Bandelier National Monument is a 33,677-acre (13,629 ha) United States National Monument in New Mexico preserving the homes and territory of the Ancestral Puebloans. Most of the pueblo structures date to two eras, in total from 1150 to 1600 CE.

The Monument is 50 square miles (130 km2) of the Pajarito Plateau, on the slopes of the Jemez Volcanic field in the Jemez Mountains. Over 70% of the Monument is wilderness, with over one mile elevation change, from about 5,000 feet (1,500 m) along the Rio Grande to over 10,000 feet (3,000 m) at the peak of Cerro Grande on the rim of the Valles Caldera, providing for a wide range of life zones and wildlife habitats. There are only three miles of road, but over 70 miles of hiking trails. The Monument protects Ancestral Pueblo archeological sites, a diverse and scenic landscape, and the country's largest National Park Service Civilian Conservation Corps National Landmark District.

Bandelier was designated by President Woodrow Wilson as a National Monument on February 11, 1916, and named for Adolph Bandelier, a Swiss anthropologist who researched the cultures of the area and supported preservation of the sites. The National Park Service co-operates with surrounding pueblos, other federal agencies, and state agencies to manage the park. The monument received 193,914 visitors in 2011.[3]

In October 1976, roughly seventy percent of the monument, 23,267 acres (9,416 ha), was included within the National Wilderness Preservation System.[5] The park's elevations range from about 5,000 feet (1,500 m) at the Rio Grande to over 10,200 feet (3,100 m) at the summit of Cerro Grande.[6] The Valles Caldera National Preserve adjoins the monument on the north and west, extending into the Jemez Mountains.

Much of the area was covered with volcanic ash (the Bandelier tuff) from an eruption of the Valles Caldera volcano 1.14 million years ago. The tuff overlays shales and sandstones deposited during the Permian Period and limestone of Pennsylvanian age. The volcanic outflow varied in hardness; the Ancestral Pueblo People broke up the firmer materials to use as bricks, while they carved out dwellings from the softer material.[7]

Human presence in the area has been dated to over 10,000 years before present. Permanent settlements by ancestors of the Puebloan peoples have been dated to 1150 CE; these settlers had moved closer to the Rio Grande by 1550.[8] The distribution of basalt and obsidian artifacts from the area, along with other traded goods, rock markings, and construction techniques, indicate that its inhabitants were part of a regional trade network that included what is now Mexico.[9] Spanish colonial settlers arrived in the 18th century. The Pueblo Jose Montoya brought Adolph Bandelier to visit the area in 1880. Looking over the cliff dwellings, Bandelier said, "It is the grandest thing I ever saw."[10]

Based on documentation and research by Bandelier, there was support for preserving the area and President Woodrow Wilson signed the legislation creating the monument in 1916. Infrastructure, including a lodge, was built during the 1920s and 1930s. The structures at the monument built during the Great Depression by the Civilian Conservation Corps constitute the largest assembly of CCC-built structures in a National Park area that has not been altered by new structures in the district. This group of 31 buildings illustrates the guiding principles of National Park Service Rustic architecture.

The monument was closed to the public for several years during World War II, since the lodge was being used to house personnel working on the Manhattan Project to develop an atom bomb.[11]

Frijoles Canyon contains a number of ancestral pueblo homes, kivas (ceremonial structures), rock paintings, and petroglyphs. Some of the dwellings were rock structures built on the canyon floor; others were cavates produced by voids in the volcanic tuff of the canyon wall and carved out further by humans. A 1.2-mile (1.6 km), predominantly paved, "Main Loop Trail" from the visitor center affords access to these features. A trail extending beyond this loop leads to Alcove House (formerly called Ceremonial Cave, and still so identified on some maps), a shelter cave produced by erosion of the soft rock and containing a small, reconstructed kiva that hikers may enter via ladder. 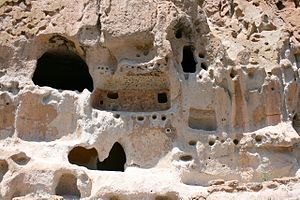 Detail of natural cavities and architectural carving into the soft tuff.

One site of archaeological interest in the canyon is Tyuonyi (Que-weh-nee) pueblo and nearby building sites, such as Long House. Tyuonyi is a circular pueblo site that once stood 1-3 stories tall. Long House is adjacent to Tyounyi, built along and supported by the walls of the canyon. A reconstructed Talus House is also found along the Main Loop Trail. 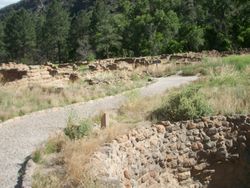 These sites date from the Pueblo III Era (1150 to 1350) to the Pueblo IV Era (1350 to 1600). The age of the Tyuonyi construction has been fairly well established by the tree-ring method of dating, widely and successfully used by archeologists in the Southwest. Ceiling-beam fragments recovered from various rooms give dates between 1383 and 1466. This general period seems to have been a time of much building in Frijoles Canyon; a score of tree-ring dates from the Rainbow House ruin, which is down the canyon a half-mile, fall in the early and middle 15th century. Perhaps the last construction anywhere in Frijoles Canyon occurred close to 1500, with a peak of population reached near that time or shortly thereafter.

The century before Tyuonyi's construction is thought to be characterized by intense change and migration in the Ancestral Puebloan culture. The period of highest population density in Frijoles Canyon corresponds to a period contemporaneous with a wide-scale migration of Ancestral Puebloans from the Four Corners area, which was suffering a deep drought, environmental stress, and social unrest in the Pueblo III period. Scholars believe that some Ancestral Puebloan groups relocated into the Rio Grande valley, southeast of their former territories, founding Tyuonyi and nearby sites. The pueblo was abandoned by 1600. The inhabitants relocated to pueblos near the Rio Grande such as Cochiti and San Ildefonso, which are still occupied.

Other, primitive trails enter the backcountry, which contains additional smaller archaeological sites, canyon/mesa country, and some transient waterfalls. Hikes to many of these areas are feasible and range in length from short (<1 hour) excursions to multi-day backpacks (permit from Visitor Center required for overnight trips). Some of the backcountry sites have been submerged, damaged, or rendered inaccessible by Cochiti Lake, a reservoir on the Rio Grande created to reduce the seasonal flooding that threatened communities and agricultural areas downstream.

A detached portion of the monument called the Tsankawi unit is near the town of Los Alamos. It has some excavated sites and petroglyphs. Also at the Tsankawi unit are the remains of the home and school for indigenous people established in the 19th century by Baroness Vera von Blumenthal and her lover Rose Dougan (or Dugan).

In the upper elevations of the monument, Nordic skiing is possible on a small network of trails reachable from New Mexico Highway 4. Not every winter produces snowfall sufficient to allow good skiing.

Wildlife is locally abundant, and deer and Abert's squirrels are frequently encountered in Frijoles Canyon. Black bear and mountain lions inhabit the monument and may be encountered by the backcountry hiker. A substantial herd of elk are present during the winter months, when snowpack force them down from their summer range in the Jemez Mountains.

Notable among the smaller mammals of the monument are large numbers of bats that seasonally inhabit shelter caves in the canyon walls, sometimes including those of Frijoles Canyon near the loop trail. Wild turkeys, vultures, ravens, several species of birds of prey, and a number of hummingbird species are common. Rattlesnakes, tarantulas, and "horned toads" (a species of lizard) are occasionally seen along the trails.

The visitor center at Bandelier National Monument features exhibits about the site's inhabitants, including Ancestral Pueblo pottery, tools and artifacts of daily life. There are two life-size dioramas that demonstrate Pueblo life in the past and today. Also featured are contemporary Pueblo pottery pieces, 14 pastel artworks by Works Progress Administration artist Helmut Naumer Sr, and wood furniture and tinwork pieces created by the Civilian Conservation Corps. There is a 10-minute introductory film about the monument.

The Main Loop Trail is 1.2 miles (1.9 km) long and loops through archeological areas, including the Big Kiva, Tyuonyi, Talus House, and Long House. It will take between 45 minutes and one hour. There are some optional ladders to allow access to the cavates (small human-carved alcoves).[12]

Prior to the construction of the modern entrance road, the Frey Trail was the only access to the canyon. Originally, the parking lot was at the canyon rim. Today, it starts at the campground amphitheater. The trail is 1.5 miles (2.4 km) one way. There is an elevation change of 550 feet (170 m).[13]

The Alcove House trail beings at the west end of the Main Loop trail and extends 0.5 miles (0.80 km) to Alcove House. Previously called the Ceremonial Cave, the alcove passes 140 feet (43 m) above the floor of Frijoles Canyon. This pueblo was the home of around 25 Ancestral Pueblo people. Except in winter, the site is reached by 4 wooden ladders and stone stairs. Alcove House has a reconstructed kiva that offers views of viga holes and niches of several homes.[14] However, access to the kiva's interior is closed indefinitely as of spring 2013, for safety reasons associated with stabilization of the structure, although the ladders and stairs are once again open to the public.

The Falls Trail starts at the east end of the Backpacker's Parking Lot. Over its 2.5 miles (4.0 km), it descends 700 feet (210 m), passing two waterfalls and ending at the Rio Grande. However, trail damage resulting from the Las Conchas Fire has led to the indefinite, and possibly permanent, closure of the trail beyond Upper Frijoles Falls pending remediation. In addition to the elevation change, its challenges include steep dropoffs at many places along the trail and a lack of bridges over Frijoles Creek, which continue to be factors even with the closure of the lower part of the trail.[15]

The 2.5 miles (4.0 km) Frijolito Loop Trail trail is more strenuous. It starts in the Cottonwood Picnic Area and climbs out of Frijoles Canyon using a switchback path. Once on top of the mesa, it passes Frijolito Pueblo. It returns to the visitor center along the Long Trail.[16]

Bandelier has excellent examples of CCC-constructed National Park Service Rustic style of architecture, built during the Great Depression by work crews while the areas was managed by the U.S. Forest Service in the 1930s. The Bandelier CCC Historic District now encompasses these historic structures, which consist of the Frey Lodge, including the dining room, snack bar and kitchen (park headquarters); the guest cabins (employee housing), the gift shop (gift shop), and the park visitor center.[17]