Barnstable /ˈbɑːrnˌstəbəl/ is a city,[1] referred to as the Town of Barnstable,[2] in the U.S. state of Massachusetts and the county seat of Barnstable County.[3] Barnstable is the largest community, both in land area and population, on Cape Cod. At the 2010 census it had a population of 45,193.[4] The town contains several villages (one of which is also named Barnstable) within its boundaries.[5] Its largest village, Hyannis, is the central business district of the county and home to Barnstable Municipal Airport, the airline hub of Cape Cod and the islands of Martha's Vineyard and Nantucket. Additionally, Barnstable is a 2007 winner of the All-America City Award.

Barnstable takes its name from Barnstaple, Devon, England. The area was first explored by Bartholomew Gosnold in 1602. It was one of the first towns to be settled in Plymouth Colony, one year behind Sandwich, in 1638, and was incorporated in 1639. The early settlers were farmers, led by the Reverend Joseph Hull, the founder of Barnstable.[6] A memorial tablet was dedicated there in 1939 (the 300th anniversary of the town's founding) marking the site of his home, and the rock from which he preached still stands along the highway there.[7][8][9]

Soon after the town's founding, agriculture, fishing and salt works became its major industries. By the end of the 19th century, there were some 804 ships harbored in the town. But this came to a decline with the rise of the railroad, which had arrived in 1854, and of steamships.

By the late 19th century, however, Barnstable was becoming world-renowned as the tourist destination it is to this day. Many prominent Bostonians spent their summers on the Cape shores, as did Presidents Ulysses S. Grant and Grover Cleveland. However, the most famous family to summer in the town was, and remains, the Kennedy family, who can still be found living in the Kennedy Compound in Hyannis Port. It was the summer home of President John F. Kennedy during his administration, and it was likewise the home of Senator Ted Kennedy until his death.

Today, tourists come in droves to the town during the summer months. There is abundant shopping in the quaint shops of Hyannis, and other popular sites abound, such as the John F. Kennedy Museum and several other museums and places on the National Register of Historic Places, including the Ancient Burying Ground and Gideon Hawley House. The town's many beaches are popular tourist destinations as well.[10]

The Town of Barnstable contains several villages, which are not legally defined entities. Between seven[12] and eleven[5] are commonly enumerated, listed below with ZIP codes:

To the north of Barnstable lie the dunes of Sandy Neck along Barnstable Harbor, tipped by the Sandy Neck Light. The central part of the town is dominated by the pines and oaks around Wequaquet Lake. The south is where the bulk of the population lives, many along the beaches of Centerville and Hyannis Harbors. 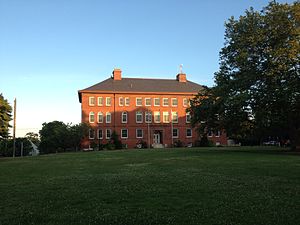 Barnstable has a council–manager government. It was created when the Town rewrote its charter and moved from a selectmen-town meeting form of government to a town council form of government in 1989. Barnstable is one of fourteen Massachusetts municipalities that have applied for, and been granted, city forms of government but wish to retain "the town of” in their official names.[16] The first town manager, Warren Rutherford, was in office from 1990-1997. His successor, James Tinsley, was in office from 1997 to 1999, when he died from a heart attack. He was succeeded by former state representative John C. Klimm. Klimm had his contract bought-out in 2011 due to internal disputes among a majority of the Barnstable Town Council. Thomas K. Lynch has served as the Town Manager since 2011.

The town hall is located within the village of Hyannis, and the police station is located on Route 132, closer to the geographic center of town. There are eight fire stations, seven libraries and ten post offices located throughout the town, with the largest or central branches usually being in the downtown Hyannis area. Hyannis also is the site of the Cape Cod Hospital, which serves the central Cape region. Also, as the county seat of Barnstable County, the town is the site of the county courthouse and juvenile lockup at the old House of Corrections, as well as the Offices of the Cape and Islands District Attorney.

On the national level, Barnstable is a part of Massachusetts's 9th congressional district, and is currently represented by William R. Keating. The state's senior (Class II) member of the United States Senate, is Elizabeth Warren. The junior senator from Massachusetts is Ed Markey, elected in 2013.

Barnstable is the home of Cape Cod Community College, a two-year junior college affiliated with Suffolk University in Boston.

Both U.S. Route 6 and Massachusetts Route 28 pass through the town from west to east, with Route 6 being a four-lane freeway through the town. Routes 6A, 132, 149 and a brief, 1/10 mile portion of 130 are also located in town. Route 6A follows an east-west route to the north of Route 6, on its route between the Sagamore Bridge and the Orleans Rotary. Routes 132 and 149 are both entirely located within the town, and both begin at 6A and end at Route 28.

Since 2013, the CapeFlyer passenger rail service has run on weekends between Memorial Day and Columbus Day. The Kingston/Route 3 and Middleborough/Lakeville stations of the MBTA's commuter rail system provide the closest, year-round, direct service to Boston. The nearest inter-city (Amtrak) passenger rail stations are Boston's South Station and Providence. Freight rail service is provided by the Massachusetts Coastal Railroad.

The Cape Cod Central Railroad operates seasonal tourist excursions from Hyannis to Sandwich and Sagamore, with some scheduled weekend stops at the West Barnstable depot on Route 149 near Route 6A.

The town is the site of two airports. Cape Cod Airfield is a smaller airfield, used primarily for private travel, and Barnstable Municipal Airport at Polando Field is used for regional flights, especially between the Cape and the islands. The nearest national and international air service can be reached at Logan International Airport in Boston. Hyannis is also the site of the main ferry lines to Nantucket and Martha's Vineyard.

Notable persons who have lived in the town of Barnstable: