From Infogalactic: the planetary knowledge core
Jump to: navigation, search
For other people of the same name, see Basil I (disambiguation).

Basil I, called the Macedonian (Greek: Βασίλειος ὁ Μακεδών, Basíleios hō Makedṓn; 811 – August 29, 886) was a Byzantine Emperor who reigned from 867 to 886. Born a simple peasant in the Byzantine theme of Macedonia, he rose in the Imperial court, and usurped the Imperial throne from Emperor Michael III (r. 842–867). Despite his humble origins, he showed great ability in running the affairs of state, leading to a revival of Imperial power and a renaissance of Byzantine art. He was perceived by the Byzantines as one of their greatest emperors, and the dynasty he founded, the Macedonian (Greek: Μακεδονική δυναστεία), ruled over what is regarded as the most glorious and prosperous era of the Byzantine Empire.

From peasant to emperor

Basil was born to peasant parents in late 811 (or sometime in the 830s in the estimation of some scholars) at Charioupolis in the Byzantine theme of Macedonia (an administrative division corresponding to the area of Adrianople in Thrace).[1][2] Contemporary Byzantine Thrace was inhabited by people of Slavic, Greek and Armenian origins. Claims have been made for an Armenian,[1] Slavic,[3][4] or indeed "Armeno-Slavonic"[2] origin for Basil I. The author of the only dedicated biography of Basil I in English has concluded that it is impossible to be certain what the ethnic origins of the emperor were, though Basil was definitely reliant on the support of Armenians in prominent positions within the Byzantine Empire.[5] During his reign, an elaborate genealogy was produced that purported that his ancestors were not mere peasants, as everyone believed, but descendants of the Arsacid (Arshakuni) kings of Armenia and also of Constantine the Great.[6]

File:BasileiosWrestlingMatch.jpg
Basil victorious in a wrestling match against a Bulgarian champion (far left), from the Madrid Skylitzes manuscript.

One story asserts that he had spent a part of his childhood in captivity in Bulgaria, where his family had, allegedly, been carried off as captives of the Khan Krum (r. 803–814) in 813. Basil lived there until 836, when he and several others escaped to Byzantine-held territory in Thrace.[1] Basil was ultimately lucky enough to enter the service of Theophilitzes, a relative of the Caesar Bardas (the uncle of Emperor Michael III), as a groom. While serving Theophilitzes, he visited the city of Patras, where he gained the favour of Danielis, a wealthy woman who took him into her household and endowed him with a fortune.[7] He also earned the notice of Michael III by his abilities as a horse tamer and in winning a victory over a Bulgarian champion in a wrestling match; he soon became the Byzantine Emperor's companion, confidant, and bodyguard (parakoimomenos).[8]

The coronation of Basil I as co-emperor, from the Madrid Skylitzes manuscript.

On Emperor Michael's orders, Basil divorced his wife Maria and married Eudokia Ingerina, Michael's favourite mistress, in around 865.[7] During an expedition against the Arabs, Basil convinced Michael III that his uncle Bardas coveted the Byzantine throne, and subsequently murdered Bardas with Michael's approval on April 21, 866. Basil then became the leading personality at court and was invested in the now vacant dignity of kaisar (caesar), before being crowned co-emperor on May 26, 866. This promotion may have included Basil's adoption by Michael III, himself a much younger man. It was commonly believed that Leo VI, Basil's successor and reputed son, was really the son of Michael.[7] Although Basil seems to have shared this belief (and hated Leo), the subsequent promotion of Basil to caesar and then co-emperor provided the child with a legitimate and Imperial parent and secured his succession to the Byzantine throne. It is notable that when Leo was born, Michael III celebrated the event with public chariot races, whilst he pointedly instructed Basil not to presume on his new position as junior emperor.[9]

When Michael III started to favour another courtier, Basiliskianos, Basil decided that his position was being undermined. Michael threatened to invest Basiliskianos with the Imperial title and this induced Basil to pre-empt events by organizing the assassination of Michael on the night of September 23/24, 867. Michael and Basiliskianos were insensibly drunk following a banquet at the palace of Anthimos when Basil, with a small group of companions (including his father Bardas, brother Marinos, and cousin Ayleon), gained entry. The locks to the chamber doors had been tampered with and the chamberlain had not posted guards; both victims were then put to the sword.[10] On Michael III's death, Basil, as an already acclaimed co-emperor, automatically became the ruling basileus.[11]

Basil I inaugurated a new age in the history of the Byzantine Empire, associated with the dynasty which he founded, the so-called "Macedonian dynasty". This dynasty oversaw a period of territorial expansion, during which Byzantium was the strongest power in Europe and the eastern Mediterranean.

It is remarkable that Basil I became an effective and respected monarch, ruling for 19 years, despite being a man with no formal education and no military or administrative experience. Moreover, he had been the boon companion of a debauched monarch and had achieved power through a series of calculated murders. That there was little political reaction to the murder of Michael III is probably due to his unpopularity with the bureaucrats of Constantinople because of his disinterest in the administrative duties of the Imperial office. Also, Michael's public displays of impiety had alienated the Byzantine populace in general. Once in power Basil soon showed that he intended to rule effectively and as early as his coronation he displayed an overt religiosity by formally dedicating his crown to Christ. He maintained a reputation for conventional piety and orthodoxy throughout his reign.[12] 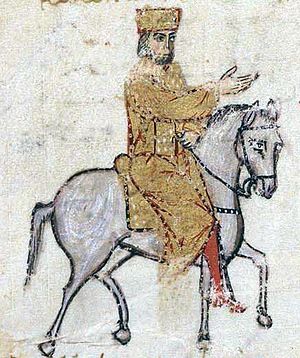 Basil I on horseback

To secure his family on the throne, Basil I raised his eldest son Constantine (in 869) and his second son Leo (in 870) to the position of co-emperor.

Because of the great legislative work which Basil I undertook, he is often called the "second Justinian." Basil's laws were collected in the Basilika, consisting of sixty books, and smaller legal manuals known as the Eisagoge. Leo VI was responsible for completing these legal works. The Basilika remained the law of the Byzantine Empire down to its conquest by the Ottomans. Ironically, this codification of laws seems to have begun under the direction of the caesar Bardas who was murdered by Basil.[13] Basil's financial administration was prudent. Consciously desiring to emulate Emperor Justinian I (r. 527–565), Basil also initiated an extensive building program in Constantinople, crowned by the construction of the Nea Ekklesia cathedral.

His ecclesiastical policy was marked by good relations with Rome. One of his first acts was to exile the Patriarch of Constantinople, Photios, and restore his rival Ignatios, whose claims were supported by Pope Adrian II.[1] However, Basil had no intention of yielding to Rome beyond a certain point. The decision of Boris I of Bulgaria to align the new Bulgarian Church with Constantinople was a great blow to Rome, which had hoped to secure it for herself. But on the death of Ignatios in 877, Photios became patriarch again, and there was a virtual, though not a formal, breach with Rome. This was a watershed event in conflicts that led to the Great Schism that ultimately produced the Roman Catholic Church and the Eastern Orthodox Church as separate ecclesiastical entities.

Emperor Basil's reign was marked by the troublesome ongoing war with the heretical Paulicians, centered on Tephrike on the upper Euphrates, who rebelled, allied with the Arabs, and raided as far as Nicaea, sacking Ephesus. Basil's general, Christopher, defeated the Paulicians in 872, and the death of their leader, Chrysocheir, led to the definite subjection of their state.[14] There was the usual frontier warfare with the Arabs in Asia Minor, which led to little concrete gain, but the Empire's eastern frontier was strengthened. The island of Cyprus was recovered, but retained for only seven years.

Basil was the first Byzantine emperor since Constans II (r. 641–668) to pursue an active policy to restore the Empire's power in the West. Basil allied with Holy Roman Emperor Louis II (r. 850–875) against the Arabs and sent a fleet of 139 ships to clear the Adriatic Sea of their raids. With Byzantine help, Louis II captured Bari from the Arabs in 871. The city eventually became Byzantine territory in 876. However, the Byzantine position on Sicily deteriorated, and Syracuse fell to the Emirate of Sicily in 878. This was ultimately Basil's fault as he had diverted a relief fleet from Sicily to haul marble for a church instead. Although most of Sicily was lost, the general Nikephoros Phokas (the Elder) succeeded in taking Taranto and much of Calabria in 880. The successes in the Italian peninsula opened a new period of Byzantine domination there. Above all, the Byzantines were beginning to establish a strong presence in the Mediterranean Sea, and especially the Adriatic.[15]

Basil I and his son Leo. Leo is discovered carrying a knife in the emperor's presence

Basil's spirits declined in 879, when his eldest and favorite son Constantine died. Basil now raised his youngest son, Alexander, to the rank of co-emperor. Basil disliked the bookish Leo, on occasion physically beating him; he probably suspected Leo of being the son of Michael III. In his later years, Basil's relationship with Leo was clouded by the suspicion that the latter might wish to avenge the murder of Michael III. Leo was eventually imprisoned by Basil after the detection of a suspected plot, but the imprisonment resulted in public rioting; Basil threatened to blind Leo but was dissuaded by Patriarch Photios. Leo was eventually released after the passage of three years.[16] Basil died on August 29, 886 from a fever contracted after a serious hunting accident when his belt was caught in the antlers of a deer, and he was allegedly dragged 16 miles through the woods. He was saved by an attendant who cut him loose with a knife, but he suspected the attendant of trying to assassinate him and had the man executed shortly before he himself died.[17]

One of the first acts of Leo VI as ruling emperor was to rebury, with great ceremony, the remains of Michael III in the Imperial Mausoleum within the Church of the Holy Apostles in Constantinople. This did much to confirm in public opinion the view that Leo considered himself to have been Michael's son.[18]

Aspects of the family relationships of Basil I are uncertain and open to a variety of interpretations, the information given below should not be treated as comprehensive or definite.[19]

The mother of Basil is unknown, but his father was:

By his first wife Maria, Basil I had several children, including:

By his second wife, Eudokia Ingerina, Basil I officially had the following children: