Batam is an industrial boomtown, an emerging transport hub, a part of a free trade zone the Indonesia–Malaysia–Singapore Growth Triangle, located 20 km (12 mi) off Singapore's south coast. The 715-km2 (276-mi2) island, now just barely smaller in sizes to Singapore due to the latter's reclamation, is the core part of the municipality, of which 450 km2 is classified as urban. Batam's 2,200  km2 municipality (administratively) covers a number of scattered islands and islets, with Galang and Rempang islands to the immediate south connected to Batam by short bridges, collectively called Barelang with these two islands maintaining their rural character. Bulan Island is also rural. The municipality has a population of 1,035,280 (prediction in May 2015).,[1] also It is the closest part of Indonesia to Singapore, at a minimum land distance of 5.8 km, similar in length to the Transbay Tube. As per the 2010 Census, it was the fastest-growing municipality in the nation, with a population growth rate of 11% per year.[2]

Batam is located west of Bintan Island, south of Singapore, north of Rempang, Galang, and east of Bulan Island. The Riau Strait separates Batam and Bintan.

Batam has a tropical climate with average temperatures between 26 and 32 °C. Humidity in the region ranges from 73% to 96%. The wet season spans from November to April, while the dry season is from May to October. Average annual rainfall is around 2,600 mm.[citation needed]

The society of Batam is a heterogeneous society in the context of Indonesia consisting of diverse ethnicities and classes. The dominant ethnicities are Malays, Javanese, Batak, Minangkabau, and Chinese. As a municipality it exemplifies the national motto of "Bhinneka Tunggal Ika (Unity Through Diversity). The location of Batam close to Singapore is conducive to the growth of economic, sociopolitical, and cultural aspects of local society. In April 2012, Batam had a population of 1,153,860 inhabitants and the population is increasing rapidly. Between 2001 and April 2012, it had a population growth rate of more than 8% per year.

Islam is the majority religion in Batam, with 77% of the population, followed by Christians (17%), Buddhists (5.79%), and Hinduism (0.4%). The Great Mosque of Batam, located in the city center adjacent to the main square, the mayor's office and the provincial Parliament, is an important symbol of Islamic religious life in Batam. Christianity and Catholicism are also widely embraced by people of Batam, especially those from the Batak people of Sumatra and transmigrants from Flores. The majority of the Chinese population practises Buddhism. A number of Viharas are located in Batam, of which Vihara Duta Maiteriya is one of the most frequented, and is the largest Vihara in Southeast Asia with an area of 4.5 hectares.

Indonesian is common lingua franca of Batam in daily use. Malay, Minang, Batak, Javanese, and Chinese ethnic dialects like Hokkien and Teochew are used, and English and German is also spoken, especially by expats living in Batam.

Batam City (Kotamadya Batam) is divided into 12 districts (kecamatan) – which include several adjacent islands such as Bulan, Rempang and Galang, as well as Batam Island itself. The whole municipality is thus often known by the abbreviation of Barelang. The districts are tabulated below with their 2010 Census population:[4] 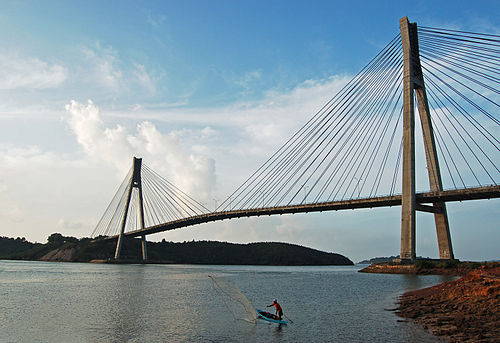 Beginning in the 1970s, the island underwent a significant transformation from a largely forested area into a major harbour and industrial zone.[citation needed] Shipbuilding and electronics manufacturing are important industries on the island. Being located close to the ports of Singapore, the speed of goods shipping and product distribution is increased, benefiting the island's economy. With lower labour costs and special government incentives, it is the site of many factories operated by foreign companies.[5]

Under a framework signed in June 2006, Batam, along with parts of neighbouring Bintan and Karimun, are a part of a Special Economic Zone with Singapore; this zone eliminates tariffs and value-added taxes for goods shipped between Batam and Singapore.[6]

In 2010, around 58% of foreign tourists came from Singapore, and 13% from Malaysia.[7] The island is the location of the International University of Batam.

Batam has recently been exposed as a major facilitator of the controversial ivory trade.[8]

The local ferry terminal ports connect to nearby Singapore and Bintan, and provides routes to Johor Bahru (Malaysia). Five ferry terminals are on the island: Harbourbay, Nongsapura Ferry Terminal, Sekupang, Waterfront City, and Batam Centre International Ferry Terminal. The most recent incident happened on 29 November 2015 when a ferry 'Sea Prince' hit floating object(s) while en route to Singapore from Batam and began leaking, a total of 97 passengers were rescued on life rafts.[9][10]

Signs showing a picture of a raised finger over a pair of lips have been placed in August 2014 at the Batam Centre International Ferry Terminal to request silence while queuing for immigration to hear names being called and clearly hear instructions given by the immigration officer . Some visitors have been sent back immediately on the first ferry available for flouting this rule. The signs are also applicable at other terminals, but they are not strictly enforced.[11][12]

Taxies in Batam are almost available anywhere, at ferry terminals, airport, shopping malls, hotels, etc. More than 3000 taxies are in Batam. In the early 2000s, Batam commonly had Toyota Corolla taxies. Starting in late 2013, more than 95% of taxies are brand new, using the Toyota Limo and Chevrolet Lova.

Due to piling works for tourism activity, sand mining, and logging for charcoal business, only 4.2% of Batam island is covered in mangrove forest, a great decrease from 24% in 1970.[15] Originally, Batam Island had 41,500 hectares of mangrove forests.[16]