From Infogalactic: the planetary knowledge core
Jump to: navigation, search
This article is about the battle in 1813. For the lesser-known battle in 1812, see Battle of Castalla (1812).

In the Battle of Castalla on 13 April 1813, an Anglo-Spanish-Sicilian force commanded by Lieutenant General Sir John Murray fought Marshal Louis Gabriel Suchet's French Army of Valencia and Aragon. Murray's troops successfully repelled a series of French attacks on their hilltop position, causing Suchet to retreat. The action took place during the Peninsular War, part of the Napoleonic Wars. Castalla is located 35 kilometers north-northwest of Alicante, Spain.

General Arthur Wellesley, Marquess of Wellington wanted to prevent Suchet from reinforcing the other French armies in Spain. He ordered, Murray, whose army had been built up to over 18,000 Allied troops, to accomplish this purpose. Murray's maneuvers were ineffective and prompted Suchet to lash out at his force. The French marshal fell upon a nearby Spanish force, beating it with heavy losses. Suchet then focused on crushing Murray. One of the British brigadiers, Frederick Adam conducted a splendid rear guard action on 12 April, allowing Murray to draw up his army in a formidable defensive position near Castalla. On the 13th, Suchet's frontal attacks were repulsed with heavy losses by British troops under Adam and John Mackenzie and by Spanish troops led by Samuel Ford Whittingham. The French withdrew and Murray did not follow up his victory.

Alone among Napoleon's marshals, Suchet won his baton by his victories in Spain.[1] However, he avoided cooperating with his fellow French commanders and acted as though the provinces of Aragon and Valencia were his private kingdom. Even so, General Arthur Wellesley, Marquess Wellington knew that if Suchet's forces intervened in the battles in central and northern Spain, things might go badly for the British army. So Wellington requested that amphibious operations be directed against the east coast of Spain in order to keep Suchet's men occupied.[2]

Since the summer of 1812, an 8,000-strong Anglo-Sicilian force, joined by about 6,000 Spanish troops from Minorca, occupied the port of Alicante on the east coast of Spain.[3] The army frequently changed generals but did nothing to contribute to the Anglo-Allied war effort. In February 1813, Murray was appointed to command the reinforced 18,000-man force.[2]

In early April, after making some indecisive maneuvers, Murray posted his small army at Villena, northwest of Alicante. Meanwhile, Suchet decided to surprise the British general and his Spanish allies. The French marshal split his force into two columns, sending one column under General of Division Jean Isidore Harispe to attack a Spanish force at Yecla. A second column under Suchet's personal command marched against Murray at Villena.[4]

On 11 April 1813, Harispe fell upon General Mijares and his 3,000 Murcians at Yecla. In a surprise attack led by the 4th Hussar and 24th Dragoon Regiments, the Spanish troops were routed, losing 400 killed and 1,000 prisoners. Two infantry battalions were virtually annihilated. The French admitted losses of 18 killed and 61 wounded.[5]

Murray heard about the disaster by noon that day. He immediately beat a retreat toward Alicante, dropping off a 2,200-man all-arms brigade under Colonel Frederick Adam at the pass of Biar to cover his withdrawal. On the morning of 12 April, Suchet captured a Spanish battalion at Villena and set out in pursuit of Murray. At Biar, the French came up with Adam's rearguard but were unable to overrun the well-handled force, which consisted of British, King's German Legion, Italian and Spanish elements. In a brilliant five-hour action, Adam successfully fended off his French pursuers, allowing Murray to concentrate his army at Castalla.[4] In one incident, Suchet's cavalry raced after their enemies after flushing the Allied soldiers from Biar. But this attempt to turn a retreat into a rout failed when the French troopers charged into a neatly executed ambush by three companies of the 2/27th Foot.[6] During the action, the French suffered about 300 casualties and Adam lost 260 killed and wounded plus 41 missing. The British colonel was forced to abandon two of his four cannons.[7] 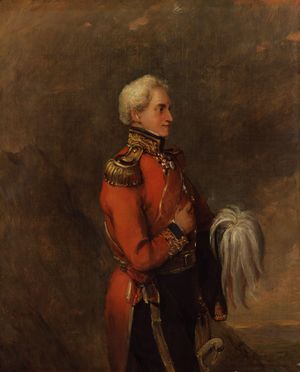 Frederick Adam performed well while leading a brigade at Biar and Castalla.

The strong Castalla position consisted of a castle-topped ridge that overlooked a deep stream bed. A spur projecting forward from the ridge tended to split any attack on the position. Further, a flooded stream protected the right of the Anglo-Allied line. Murray put Whittingham's Spanish division in a fortified position on the left flank. Adam's brigade held the left-center and Mackenzie's division held the right-center. The British commander posted Clinton's division on the right flank. Part of General Roche's division was placed in front of Clinton, supporting a cavalry screen. The remainder of Roche's men and the rest of the cavalry were positioned behind Castalla castle in reserve.[9]

Suchet planned to send Robert and Habert with their divisions at the center of Murray's line. Meanwhile, five voltigeur (light) companies would threaten the extreme Anglo-Allied left flank and Boussart's cavalry would envelop the enemy right flank. Harispe's division was kept in reserve. The French expected that a hard blow would send the Spanish and Italian infantry fleeing.[9] Before the action commenced, Murray ordered Whittingham to shift his division west in order to overlap the French right flank. Accordingly, Whittingham began to carry out his instructions by putting his troops in motion and opening up a gap in the center.[6]

At noon on 13 April, the French troops surged forward. Robert's attack was carried out in five columns.[9] On his own initiative, Whittingham ignored his orders and moved his division back to its original position. He detached one battalion to deal with the voltiguers.[6] Robert's three right-hand columns, together with the skirmishers, were repulsed by Whittingham's steady Spaniards. The two left-most columns came up against Adam and were likewise hurled back.[9] In a short, close-range musketry duel, Adam's 2/27th Foot, deployed in line, inflicted 369 casualties on the 121st Line's attack column.[7] Habert's advance was blocked by Mackenzie and Boussart's cavalrymen were unable to cross the flooded stream.[9]

With his infantry defeated, his cavalry off to one flank and his men outnumbered, Suchet found himself in a difficult spot. Murray proved slow to take advantage of his success, however, and the French were able to retreat almost unmolested. Suchet's rearguard ably defended the pass of Biar and allowed the French to get away with little additional loss.[11]

The Anglo-Allied force lost 440 casualties.[11] Whittingham's men suffered 233 casualties, Adam lost 70 and Mackenzie lost 47. Suchet admitted 800 casualties at Yecla, Biar and Castalla, but this is probably too low. Murray claimed to have inflicted 2,500 losses on his enemies. A more likely figure is 1,300 French casualties at Castalla. Murray failed to benefit from his victory when he continued his retreat to Alicante.[7] The next action in the theater was the Siege of Tarragona.[12]

Murray's army counted 17,080 infantry, 1,036 cavalry, and 30 guns.[9] It consisted of two Anglo-Italian and two Spanish infantry divisions, plus Adam's brigade. The army was organized as follows.[7][13]