The Battle of Ty-ho Bay was a significant naval engagement in 1855 involving the United Kingdom and United States against Chinese pirates. The action off Tai O, Hong Kong was to rescue captured merchant vessels, held by a fleet of armed war-junks. British and American forces defeated the pirates in one of the last major battles between Chinese pirate fleets and western navies. It was also one of the first joint operations undertaken by British and American forces.[1]

Unlike the Atlantic Ocean where piracy was largely over by 1830, piracy in Asia and elsewhere in the Pacific continued to thrive as it had for centuries. Chinese and Japanese pirates constantly fought each other along China's coastal regions, thus hundreds of pirate hideouts existed all over the Chinese coast by 1855. This prompted western naval forces to fight them when they attacked shipping.[2] Sometime in September 1855, the pirates of Kuhlan seized four merchant vessels in that area which were under escort by the paddle steamer HMS Eaglet. In response the Royal Navy sloop-of-war HMS Rattler was sent to rescue the merchantmen.[3][4]

HMS Rattler found the pirates in Kuhlan Harbor but shallow water prevented her from attacking so she left to seek aid from the Eaglet and USS Powhatan. Powhatan, was a screw frigate of the East India Squadron and commanded by Commodore William J. McCluney. Rattler was commanded by Commodore William Fellowes and was manned by 180 officers and crew. The number of crew and armament of Eaglet is unknown but she was originally a civil vessel chartered for British naval service between 1855 and 1857, to tow British vessels through shallow water.[5] 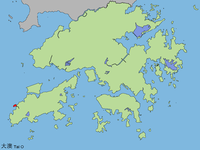 On August 4, the steamer Eaglet arrived at Ty-ho Bay, she was towing at least six boats of different types, filled with British and American sailors and marines. Each boat was armed with a howitzer or cannon. The British first spotted a merchant junk that appeared to be fleeing the bay, so the pinnace of the Rattler and the cutter of the Powhatan were sent to cut the junk out. Minutes later, when the pinnace and cutter disappeared from sight, the remaining British and American vessels sighted the pirate fleet, which included fourteen large junks and twenty-two smaller ones. Some 1,500 pirates crewed the vessels and they were armed with small cannons. Also in the bay were seven captured merchant ships, most of which were Chinese junks. When the Chinese sighted the approaching enemy, half of the pirate junks began to flee while the other remained behind to engage.[6]

The pirates began a heavy fire on the British and Americans but most of the shot was not well directed and passed over the Eaglet and the armed boats. When the expedition was in range the boats started their return fire and six junks were sunk at this time. When the range decreased to close quarters, Eaglet detached the boats and they went off to board the junks. Fourteen were taken with heavy resistance and were burned just after. The seven merchant ships were also liberated but two were heavily damaged in the battle and subsequently burned as well. As result of the action, fourteen larger junks were destroyed along with six small ones while sixteen others escaped.[7]

An estimated 500 pirates were killed in action, drowned, or were wounded. Around 1,000 pirates were taken prisoner. American casualties consisted of six wounded with five dead out of about 100 men, the dead were crewmen John Pepper, James A. Halsey, Isaac Coe, Landsman, S. Mullard and B. F. Addamson. The British suffered several wounded and four men killed, officer George Mitchell, and crewmen James Silvers, John Massey, and M. Oliff.[8] The battle is largely forgotten but a monument was erected at Happy Valley in commemoration, it was later moved to the city of Hong Kong.[clarification needed]