From Infogalactic: the planetary knowledge core
Jump to: navigation, search
This article is about the geographical feature. For other uses, see Bay (disambiguation). 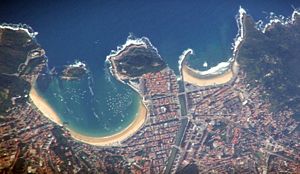 The bay at San Sebastián, Spain 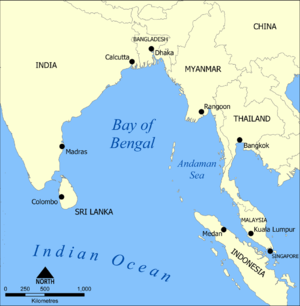 The Bay of Bengal in South Asia

The bay of Baracoa, Cuba

A bay is a body of water connected to an ocean or lake, formed by an indentation of the shoreline.[1] A large bay may be called a gulf, a sea, a sound, or a bight. A cove is a smaller circular or oval coastal inlet with a narrow entrance; some coves may be referred to as bays. A fjord is a particularly steep bay shaped by glacial activity.

Bays can exist as the estuary of a river, as the estuary of the Parramatta River in Australia. Bays may be nested in each other; for example, James Bay is an arm of Hudson Bay. Some large bays, such as the Bay of Bengal and the Hudson Bay, have varied marine geology.

The land surrounding a bay can often block waves and reduce the strength of winds. Thus bays were significant in the history of human settlement because they could provide a safe place for fishing. Later they were important in the development of sea trade as the safe anchorage they provide encouraged their selection as ports.[2]

There are various ways from which bays can be created. The largest bays have developed as a result of continental drift.[2] As the super-continent Gondwana broke up along curved and indented fault lines, the continents moved apart and the world's largest bays formed. These include the Gulf of Guinea, Persian Gulf, Gulf of Alaska, Gulf of Mexico and the Bay of Bengal, which is the largest bay in the world.[2]

Another way bays form is via glacial and river erosion.[2] A bay formed by a glacier is a fjord. Rias are created by rivers and are characterised by more gradual slopes. Most gulf and bays form by the folding of the earth's crust, and by coastal erosion due to waves and currents.[2] Currents can make waves more constant, and soft rocks speed erosion. Hard rock eroded less quickly, leaving headlands. The Gulf of California is an example of a bay created by the geological process of folding.