Bedstone is a small village and civil parish in south Shropshire, England, close to the border with Herefordshire.

The village is approximately 1 1⁄2 miles (2.4 km) from the railway stations at Hopton Heath and Bucknell and is situated just off the B4367 road.

Educating around 220 day and boarding students, the College is not selective and does not require pupils to sit an entrance exam. It offers a broad curriculum from nursery through to A Level. Physical education and extra-curricular activities are an integral part of the school week, which includes Saturday morning lessons and five afternoons set aside for sports and a choice of activities.

There are four boarding houses:

Each is run by houseparents who are typically academic staff and their families.

Its campus houses the notable country house that is Bedstone Court. Its founders include the parents of Sir Martin Rees.[2]

Judged by GCSE results, this is the 2nd best non-selective school in Shropshire and 6th overall.

St Mary's church[3] dates back to Norman times and features an original Norman font, a timber framed bellcote and a shingled spire, and some of the houses, which include several thatched cottages, are more than 600 years old. 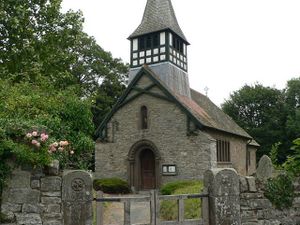 Manor Farm house is an example of a timber framed house and was partly stone faced in 1775. Bedstone Court, now the home of Bedstone College, is a more flamboyant black-and-white mansion, built between 1882 and 1884, designed by Thomas Harris for Henry Ripley, MP and is a calendar house reputed to have 365 windows, 52 rooms (on the first two floors)12 chimneys and seven external doors. The central hall has a magnificent 52 panelled stained-glass window depicting the months of the year, signs of the zodiac, birds associated with the month and the agricultural activity of the month. The building was heavily damaged by a fire in 1996 but was fully restored and continues to be the centrepiece of Bedstone College: the independent co-educational boarding and day school for pupils from 3 to 18.

Until the 2000s there was a post office but now there is just a Royal Mail post box in the hamlet.[4]

The civil parish covers a small area, with no other settlements than Bedstone itself. With a parish population of just 85 (in 2001), the parish council has now been merged with that of neighbouring Bucknell parish. In ecclesiastical terms, the church is linked with those of Hopton Castle and Clungunford.