File:Canonnière Marine Royale.jpg
One of the first gunboats of the Marine Royale
File:Battle of Rio Nunez 1849.jpg
French and Belgian warships during Rio Nuñez Incident in West Africa (1849)
File:Officier Marine Heilig Bloed.jpg
An officer of the Belgian Naval Component

The Belgian Navy was created as the Marine Royale (English: Royal Navy) in 1831. This force has operated in various forms throughout Belgian history.

When after the Belgian Revolution, the country became independent in 1830, a Dutch squadron blocked the Scheldt estuary. To deal with this threat the Belgian Congress ordered two brigantines to be built, which bore the names Congrès and Les Quatre Journées. After the French army, led by Marshal Count Gérard, captured the citadel of Antwerp in 1832, the captured Dutch gun boats were pressed into Belgian service. In 1840 the Belgian government bought the schooner Louise Marie and in 1845 the brig Duc de Brabant. Louise Marie participated in the Rio Nuñez Incident in 1849. In 1862, the Belgian government discarded its navy and pursued a minimalistic naval policy.

At the outbreak of World War I, Belgium had no navy (an impromptu force was assembled at the Battle for Lake Tanganyika) but the war caused this policy to change and in 1917 a Corps of Destroyers and Sailors was created. The Belgian naval personnel served onboard French minesweepers and provided the artillerymen for Belgian merchant ships. The Treaty of Versailles allocated Belgium 11 torpedo boats and 26 minesweepers. For budgetary reasons, Belgium again abolished its navy in 1927.

In 1939, against the looming threat of a new war with Germany, Belgium once again resurrected its navy as the Naval Corps. This new navy, consisting mostly of small patrol vessels and coastal artillery units, lasted barely a year until the German invasion of May 1940. During the 18 days campaign, the trawler A4 evacuated much of the government's gold reserve to Britain, while several others helped at the Allied evacuation at Dunkirk.[1] 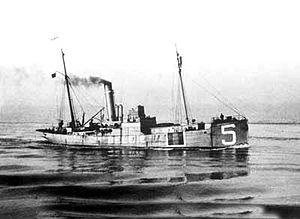 Belgian trawler A5 from WWII

During World War II many members of this naval corps, together with Belgian fishermen and merchant sailors escaped to Britain with the explicit wish of fighting the German occupiers. The Royal Navy took advantage of this opportunity to enlist the Belgians into separate groups of more or less entirely Belgian-manned ships. From 1940 to 1946, the Belgian Section of the British Royal Navy manned two corvettes, (Buttercup and Godetia), a squadron of MMS minesweepers and three patrol boats (fr (HMS Phrontis (FD142); Phrontis), Electra and Kernot). In 1946, Britain donated the ships to Belgium which along with its crews became the backbone of the new Belgian Navy.

In the beginning of the nineties, the end of the Cold War caused the Belgian government to restructure the Belgian Armed Forces in order to cope with the changed threats. This led to a reduction in the size of the Armed Forces. With regards to the Belgian navy, these cutbacks meant that one Wielingen class frigate was taken out of service and that three Tripartite class minehunters were sold to France. In 2002, the government decided to impose a "single structure" on the armed forces in which the independent Belgian Marine Royale ceased to exist. The former Navy became the Belgian Naval Component (COMOPSNAV) of the Armed Forces; it is also called the Marine.

On July 20, 2005, the Belgian government decided to buy two of the remaining six Dutch M-class frigates to replace the two remaining frigates of the Wielingen class (Wielingen and Westdiep) currently still in service with the Belgian Navy, which in turn might be sold to Bulgaria. On December 21, 2005, the Dutch government sold the Karel Doorman (F827) and Willem Van Der Zaan (F829) to Belgium. The two ships were sold for about 250 million Euros. These two M-class frigates entered service with the Belgian Navy where they were renamed Leopold I and Louise-Marie .

In October 2005, the Wielingen class frigate Wandelaar was officially handed over to the Bulgarian Navy, which christened it as the Drăzki ('The Bolds'). The remaining ships of the class were transferred to Bulgaria as well, after completing modernization in Belgium. A Tripartite-class minehunter, Myosotis, which was renamed Tsibar was transferred to Bulgaria soon after.

The current Commander of the Naval Component is Flotilla Admiral Georges Heeren.

In February 2013 it was announced that Belgium had ordered two 52-meter patrol vessels from the French shipyard SOCARENAM, to be delivered within two years. Both have since been received, P901 Castor in 2014 and P902 Pollux in early 2015. Both are to remain in service until 2044-2045[2]

In times of crisis and war the Belgian Navy will manage, with the support of its allies, the crises rising from the infringements to the principles of International law and/or from the Humans right and exercise the Belgian sovereignty in the maritime zones where the Navy is qualified, defend the lines maritime of communication, main roads and allied, and protect the ports against any air, surface or underwater attack.

In times of peace the Belgian Navy has the following roles:

There are currently four officers of flag rank in the Naval Component: 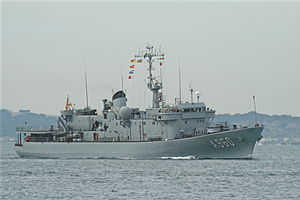 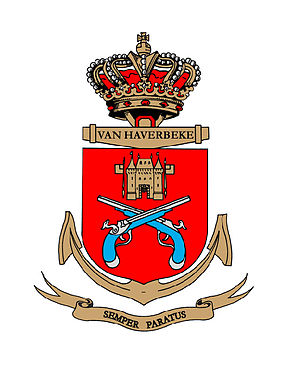 During 2012-2015 the 2 Belgian Navy Frigates will be upgraded followed suit by the 2 Frigates of the Dutch Navy.

In 2013 the first NH-90 Helicopter has been delivered and will be introduced into service replacing the Westland Sea King and Alouette III from 2014 onwards.