Benito de Soto was the most notorious of the last generation of pirates to plunder shipping in the Atlantic, one of those arising from the ending of the Napoleonic Wars.

De Soto served on an Argentinian[4] slave ship, the Defensor de Pedro. De Soto joined with the ship's mate and lead a mutiny off the coast of Angola in 1827. When 18 of the crew declined to participate they were cast adrift off in an open boat.[3]

Having changed the name of the vessel from the Defensor de Pedro to the Burla Negra, de Soto crossed the Atlantic, where he sold stolen cargo of slaves in the Caribbean,[3] and then sailed south, attacking English, American, Spanish and Portuguese ships along the South American coast. From 1830 the Burla Negra also ventured eastwards into the Atlantic to intercept vessels returning from India and the Far East.[2]

He proved to be one of the most bloodthirsty pirates of any age, murdering crews who fell into his hands and sinking their ships.[2] 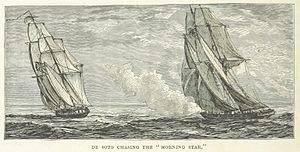 An illustration of the Burla Negra chasing the Morning Star

The most infamous episode in de Soto's career came on 19 February 1828, when the Burla Negra happened upon the Morning Star en route from Ceylon to England. After killing some of the passengers and crew with cannon fire, de Soto murdered the captain and took possession of the ship.[3]

Many of the captured crew were killed, while women passengers were raped before de Soto's men locked them in the hold with the rest of the survivors.[3] When de Soto heard that the survivors had been locked away and not murdered, he was furious, turned them around to try to find the sinking Morning Star to finish the job. He did not want any evidence of his guilt in the attack to reach the ears of the court however, de Soto could not find the drifting "Morning Star".[5]:163 Meanwhile, the imprisoned survivors had managed to escape and prevent the Morning Star from sinking. A passing merchant vessel rescued them the following day.[3]

De Soto then sailed for Corunna. On the way he encountered a small brig; he attacked and sunk it, killing all the crew but one. De Soto forced the remaining sailor to steer the Burla Negra to Corunna; when they arrived at the port, de Soto blew the man's brains out.[5]:163-164

De Soto's crimes caught up with him after the Burla Negra struck a reef and was wrecked off Cadiz. He and his men headed for Gibraltar, but they were recognized and taken for trial in Cadiz. De Soto was hanged with his remaining crew.[3] When the hangman discovered that he had set the rope at the wrong height, De Soto calmly stood on his own coffin and obligingly placed his head inside the noose.[5]:169

'Adeus todos' ("So long, everyone") were his last words. His head was then stuck on a pike as a warning to others.[3]