Bernardo Bertolucci (Italian: [berˈnardo bertoˈluttʃi]; born 16 March 1941) is an Italian film director and screenwriter, whose films include The Conformist, Last Tango in Paris, 1900, The Last Emperor, The Sheltering Sky and The Dreamers. In recognition of his work, he was presented with the inaugural Honorary Palme d'Or Award at the opening ceremony of the 2011 Cannes Film Festival.[2]

Bertolucci was born in the Italian city of Parma, in the region of Emilia-Romagna. He is the elder son of Ninetta (Giovanardi), a teacher, and Attilio Bertolucci, who was a poet, a reputed art historian, anthologist and film critic.[3] His mother was born in Australia, to an Italian father and an Irish mother.[4][5] Having been raised in an artistic environment, Bertolucci began writing at the age of fifteen, and soon after received several prestigious literary prizes including the Premio Viareggio for his first book. His father's background helped his career: the elder Bertolucci had helped the Italian filmmaker Pier Paolo Pasolini publish his first novel, and Pasolini reciprocated by hiring Bertolucci as first assistant in Rome on Accattone (1961).

Starting out with Pasolini

Bertolucci initially wished to become a poet like his father. With this goal in mind, he attended the Faculty of Modern Literature of the University of Rome from 1958 to 1961, where his film career as an assistant director to Pasolini began.[6] Shortly after, Bertolucci left the University without graduating. In 1962, at the age of 22, he directed his first feature film, produced by Tonino Cervi with a screenplay by Pasolini, called La commare secca (1962). The film is a murder mystery, following a prostitute's homicide. Bertolucci uses flashbacks to piece together the crime and the person who committed it. The film which shortly followed was his acclaimed Before the Revolution (Prima della rivoluzione, 1964).

The boom of Italian cinema, which gave Bertolucci his start, slowed in the 1970s as directors were forced to co-produce their films with several of the American, Swedish, French, and German companies and actors due to the effects of the global economic recession on the Italian film industry.

Bertolucci left Pasolini's poetic ideas behind in order to follow his own personal idea about cinema, based primarily on the individuality of people who are forced to deal with sudden changes in their lives. Such changes are both existential and political, but are without a straightforward solution (in many cases, a solution is not being sought after).[citation needed]

The above theme is present in almost all of Bertolucci's works, starting with his second film, Prima della rivoluzione (1964), where this theme is very clear in the story of a young upper-middle agrarian class boy from Parma (Francesco Barilli), who, incapable of dealing with his best friend's suicide, throws himself into a relationship with a much older distant relative from Milan (played by Adriana Asti). Both of them know the relationship can never last, and when she leaves, the young man has no choice but to marry his previous girlfriend, who he does not love, but who comes from a wealthy family of high standing, so the marriage makes his family happy.

The scandal of Last Tango in Paris

Bertolucci stirred controversy in 1972, with the film Last Tango in Paris, with Marlon Brando and Maria Schneider, Jean-Pierre Léaud and Massimo Girotti, when a scene featuring anal sex performed on character Jeane by character Paul, among other depictions of the young Schneider that were thought to be exploitative, caused serious concern due to its representation of women. During filming, the 20-year-old Schneider was not aware of the scene and, in fact, was only told moments before it was filmed.[7] To her death on 3 February 2011, she still had not forgiven Bertolucci for what she considered an emotional rape.[8] During the actual scene, she has also said she was crying real tears as she felt humiliated and violated by both Brando and Bertolucci.[8] As a direct result, she became a women's rights advocate, especially fighting for more female film directors, more respect for female actors, and better representation of females in film and media.[9]

In 2013, Bertolucci expressed regret at his treatment of Schneider,

"Poor Maria. I didn't have the occasion to go to ask her to forgive me. She was a 19-year old who, like the actors in Me and You, had never acted before. Maybe, sometimes in the movie, I didn't tell her what was going on because I knew her acting would be better. So, when we shot this scene with Marlon using butter on her, I decided not to tell her. I wanted a reaction of frustration and rage."[7]

Brando too felt raped by Bertolucci, and did not speak to him for many years as a result of the trauma of being involved with the film.[10] Last Tango in Paris presents Brando's character Paul as he uses an anonymous affair to cope with the violent death of his wife by emotionally and physically dominating a young woman. The film caused criminal proceedings to be brought against Bertolucci in Italy for the anal sex scene, and the film was sequestered by the censorship commission and all copies were ordered to be destroyed. An Italian court revoked Bertolucci's civil rights for five years and gave him a four-month suspended prison sentence.[11] In 1978, the Appeals Court of Bologna ordered three copies of the film to be preserved in the national film library with the stipulation that they could not be viewed, until Bertolucci was later able to re-submit it for general distribution with no cuts.[12]

The original copy, and the copies that had been preserved abroad, were used to make the DVD.[citation needed] 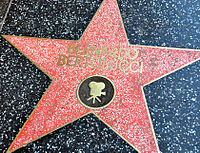 Bertolucci's star on Walk of Fame

Bertolucci increased his fame with his next few films, from 1900 (1976), an epic depiction of the struggles of farmers in Emilia-Romagna from the beginning of the 20th century up to World War II with an impressive international cast (Robert De Niro, Gérard Depardieu, Donald Sutherland, Sterling Hayden, Burt Lancaster, Dominique Sanda) to La Luna, set in Rome and in Emilia-Romagna, in which Bertolucci deals with the thorny issue of drugs and incest, and finally La tragedia di un uomo ridicolo (1981), with Ugo Tognazzi. Bertolucci appeared on the Radio Four programme Front Row on April 29, 2013, where he chose La Dolce Vita (a film directed by Fellini) for the "Cultural Exchange".

During the making of Last Tango in Paris, Bertolucci toyed with the idea of adapting Dashiell Hammett's book Red Harvest into a feature film. That material had formed the basis for Kurosawa's Yojimbo, which in turn was the basis for Sergio Leone's A Fistful of Dollars (Per un pugno di dollari). Countless others have used its premise since. The reason for this was his wanting to branch out into other forms of cinema. Bertolucci wrote two screenplays.[citation needed] The first draft was written almost entirely as a political film, from which emerged a story inspired by socialist syndicalism of the late 1920s in America. The second draft was more faithful to Hammett's original story and changed the setting to 1934. Actors considered for the role The Continental Op were Robert Redford, Clint Eastwood and Jack Nicholson. In Rome, Bertolucci and Warren Beatty talked in great detail about the film, and in 1982 Bertolucci left Europe for Los Angeles, where he was to shoot Red Harvest, but five years went by and the film was never made.

Academy Awards with The Last Emperor

In 1987, Bertolucci directed the epic The Last Emperor, a biographical film telling the life story of Aisin-Gioro Puyi, the last Emperor of China. The film was independently produced by British producer Jeremy Thomas, who became Bertolucci's preferred producer. Bertolucci has worked almost exclusively with Thomas from then on. The film was independently financed and three years in the making. Bertolucci won the Academy Award for Best Director. Bertolucci co-wrote the film with Mark Peploe. The Last Emperor uses Puyi's life as a mirror that reflects China's passage from feudalism through revolution to its current state.

After The Last Emperor, and Little Buddha, the director went back to Italy to film, as well as to his old themes with varying results from both critics and the public. He filmed Stealing Beauty in 1996, then The Dreamers in 2003, which describes the political passions and sexual revolutions of two siblings in Paris in 1968.

In 2012, his latest film Me and You was screened out of competition at the 2012 Cannes Film Festival[14][15] and was released early in 2013 in the UK. The film is an adaptation of Niccolò Ammaniti's young-adult's book Io e te (You and Me). The screenplay for the movie was written by Bertolucci himself, Umberto Contarello and Niccolò Ammaniti.[16] Bertolucci originally intended to shoot the film in 3D but later changed his mind about this, calling the idea "vulgarly commercial".[17]

As a screenwriter, producer and actor

Bertolucci has also written many screenplays, both for his own films as well as for films directed by others, two of which he also produced.

His only experience as an actor was in the film Golem-The Spirit of Exile directed by Amos Gitai in 1992.

Bertolucci is said to be working on a historical romance centering on 16th-century classical musician (and murderer) Carlo Gesualdo.[20]

Bertolucci is an atheist.[21]

Bertolucci's films are often very political. He is a professed Marxist and like Visconti, who similarly employed many foreign artists during the late 1960s, Bertolucci uses his films to express his political views; hence they are often autobiographical as well as highly controversial. His political films were preceded by others re-evaluating history. The Conformist (1970) criticised Fascist ideology, touched upon the relationship between nationhood and nationalism, as well as issues of popular taste and collective memory, all amid an international plot by Mussolini to assassinate a politically active leftist professor of philosophy in Paris. 1900 also analyses the struggle of Left and Right.

On 27 September 2009, Bertolucci was one of the signers of the appeal to the Swiss government to release Roman Polanski, who was being held while waiting to be extradited to the United States.[22]

On Twitter on 24 April 2015, Bertolucci participated in #whomademyclothes, Fashion Revolution's anti-sweatshop campaign commemorating the 2013 Savar building collapse, the deadliest accident in the history of the garment industry.[23]