Berry College is a private, four-year liberal arts college located in Mount Berry, Floyd County, Georgia,[4][5][6] just north of Rome. It is accredited by the Southern Association of Colleges and Schools (SACS). Berry was founded in 1902 by Martha Berry. With 27,000 acres (110 km2), Berry College claims to have the largest contiguous campus in the world.[7] College leaders from across the country chose Berry College as the nation's number one "Up-And-Coming" liberal arts college, according to the 2014 U.S. News Best Colleges rankings released September 10, 2013.

The Berry campus consists of more than 27,000 acres of fields, forests, and Lavender Mountain, the largest contiguous college campus in the United States.[9] Designated portions are open to the public for hiking, cycling, horseback riding, and other outdoor activities. The campus is also home to a large population of deer (estimates range between 1,500 and 2,500).

The Georgia Department of Natural Resources oversees about 16,000 acres of the campus, conducts managed hunts, and provides recreational opportunities within the department of regulations. The land encompassing the academic buildings and other public spaces is a wildlife refuge in which no hunting is allowed. In September 2011, Travel+Leisure ranked Berry as among the most beautiful college campuses in the United States, noting its numerous fountains and pools among its English Gothic-style buildings.[9]

Berry College has more than 80 miles of hiking, biking and horseback riding trails, and two disc golf courses; all are open to the Berry community and to the public. The Victory Lake Campground located in the heart of Berry's campus is available for Berry student use only. Berry offers an intramural program with men, women and co-educational play for many sports, including quidditch and inner-tube water polo. 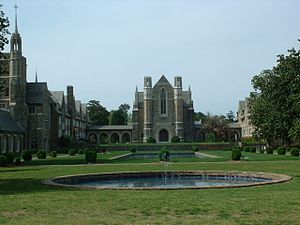 The reflecting pools located in front of the Ford Dining Hall. 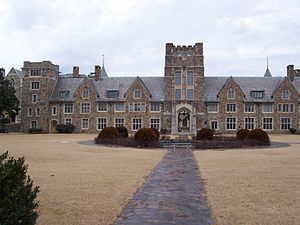 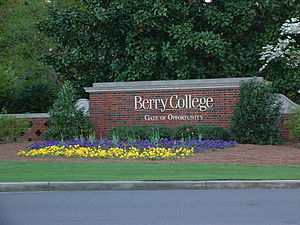 The "Gate of Opportunity" is the main entrance to the college campus.

Berry College offers Bachelor of Arts, Bachelor of Music, Bachelor of Science, Master of Business Administration, Master of Education, and Education Specialist degrees from the four schools making up its academic program. It is accredited by the Southern Association of Colleges and Schools (SACS) and is a member of the Annapolis Group, an organization of more than 120 liberal arts colleges nationwide.

The Campbell School of Business offers bachelor's degrees in accounting, economics, finance, management, and marketing. It is accredited by the Association to Advance Collegiate Schools of Business (AACSB).

The Evans School of Humanities, Arts and Social Sciences offers bachelor's degrees in art, communication, English, French, German, government, history, international studies, music, music education, music with elective studies in business, religion and philosophy, sociology and anthropology, Spanish, and theatre. The music program is accredited by the National Association of Schools of Music (NASM). Pre-law is also available as a pre-professional program. This department is home to all of the school's student publications including the Campus Carrier (campus newspaper), the Cabin Log (yearbook), Ramifications (art magazine), and Viking Fusion (multimedia news and entertainment website).

The School of Mathematical and Natural Sciences offers bachelor's degrees in animal science, biochemistry, biology, chemistry, environmental sciences, nursing, mathematics, and physics. The chemistry program is accredited by the American Chemical Society (ACS). Dual degree programs are available in engineering (with Georgia Institute of Technology College of Engineering at Georgia Institute of Technology and Southern Polytechnic College of Engineering and Engineering Technology at Kennesaw State University), and nursing (with the Nell Hodgson Woodruff School of Nursing at Emory University). Pre-professional programs in pre-dentistry, pre-medicine, pre-pharmacy, and pre-veterinary medicine are also available.

A minor degree can be obtained in 36 different courses of study throughout the four schools.

Berry’s Honors Program is an undergraduate program designed to give qualified students a chance to learn in an intellectually challenging environment with their peers and professors. The Honors Program allows the students to take Honors-only classes, Honorized classes, and to study abroad in Honors-only programs. During their last year at Berry, Honors students must complete and defend a senior thesis. Upon graduation, they will receive an Honors diploma.

Berry offers a Master of Arts in Teaching program and an Education Specialist certification in the Charter School of Education and Human Sciences that is accredited by the National Council for Teacher Education (NCATE).

The Campbell School of Business offers a Master of Business Administration program that is accredited by the Association to Advance Collegiate Schools of Business (AACSB).

The Academic Support Center is located in the Memorial Library at Berry and is open to all Berry students who need assistance. It provides free student tutoring services to any student who requests it and provides academic accommodations to students who have a documented disability. It also offers time management and study skills counseling in a one-on-one setting to Berry students.

Berry College's mission statement espouses "values based on Christian principles".[10] The school is also involved with Chick Fil-A, a Christian-run business, through its WinShape foundation programs, which requires "mandatory" church attendance and adherence.[11][12] The campus has a chaplain, four chapels, and an active religion-in-life program supporting all Christian denominations and religions outside of Christianity. The school recognizes the 'Student Association for an Inter-Religious Community,' which is a student organization that encourages dialogue between religions represented on campus.

The Berry College mascot is the Viking. Berry fields competitive teams in 23 intercollegiate sports including men’s and women’s basketball, soccer, tennis, track & field, lacrosse, swimming and diving, and golf, as well as men’s baseball and football and women’s volleyball, softball and equestrian team.

The Berry College Board of Trustees recently voted to add football beginning in the fall of 2013, with a track and field athletic program to be added soon after.[14] According to the school newspaper, The Campus Carrier, adding football will not affect issues related to equal sports opportunity under the Title IX regulations.[15] A new stadium, to be known as 'Valhalla,' is now being built on Berry's campus, as fundraising continues. The Vikings play games at the private Darlington School and at Rome's historic Barron Stadium. The new facility will be used by the college's football, track, and lacrosse programs.[16]

The stadium was originally intended to be built near the Cage Center (see below), but in 2012 a pair of bald eagles established their nest near the site. They returned and successfully raised chicks in 2013 and 2014. The school moved the stadium site to a new location well removed from the eagles, which have become a symbol of the school.[17] Groundbreaking was held on October 17, 2014, with completion expected for the 2015 football season.[18]

Berry is a founding member of the Southern Athletic Association (SAA), an NCAA Division III conference that was formed in 2011 and began play in fall 2012. Other SAA members are Birmingham-Southern College, Centre College, Hendrix College, Oglethorpe University, Millsaps College, Rhodes College, and Sewanee: The University of the South. The University of Chicago and Washington University in St. Louis are affiliate SAA football members beginning in 2015.

The Cage Center is Berry’s 131,000-square-foot athletic facility that houses a performance gymnasium, a natatorium with observation seating, a fitness center, racquetball courts, an indoor track and classrooms. The Cage was named after Berry College alumnus and trustee Steven Cage, whose $10 million donation kicked off the project.

Berry College’s student work program guarantees every student a job on campus to those interested in participating. This creates the opportunity for real work experience to build their resumes and apply their particular academic interests. Students are paid based on the Level (1-5) at which they work. Level 1 workers are typically just starting at their jobs and are paid minimum wage. As the students move up in experience and leadership, they move up in the Levels and are paid slightly more with each level. Additionally, students cannot work more than 16 hours a week.

Berry College has been used as a site for the filming of several movies, in addition to music videos by bands such as Casting Crowns. The most notable films are Remember the Titans and Sweet Home Alabama. Disney's movie Perfect Harmony was filmed at buildings including the Old Mill. A short scene from Dutch was filmed on the Berry campus.[citation needed] In addition, scenes for the new series, The Following, starring Kevin Bacon, were filmed on Berry's campus. In the Constantine television series, the Ford Buildings and the Old Mill were used as the setting for Ravenscar Asylum and Constantine's hideout, respectively.[19]