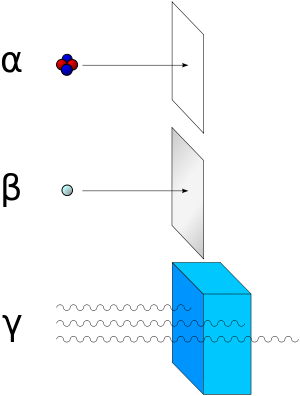 Alpha radiation consists of helium nuclei and is readily stopped by a sheet of paper. Beta radiation, consisting of electrons or positrons, is halted by an aluminum plate. Gamma radiation is damped by lead.

Beta particles are high-energy, high-speed electrons or positrons emitted by certain types of radioactive nuclei, such as potassium-40. The beta particles emitted are a form of ionizing radiation also known as beta rays. The production of beta particles is termed beta decay. They are designated by the Greek letter beta (β). There are two forms of beta decay, β− and β+, which respectively give rise to the electron and the positron.[1] 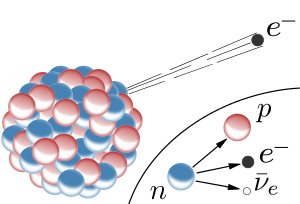 Beta decay. A beta particle (in this case a negative electron) is shown being emitted by a nucleus. An antineutrino (not shown) is always emitted along with an electron. Insert: in the decay of free neutron, a proton, an electron (negative beta ray), and an electron antineutrino are produced.

An unstable atomic nucleus with an excess of neutrons may undergo β− decay, where a neutron is converted into a proton, an electron, and an electron antineutrino (the antiparticle of the neutrino):

Beta decay commonly occurs among the neutron-rich fission byproducts produced in nuclear reactors. Free neutrons also decay via this process. Both of these processes contribute to the copious numbers of beta rays and electron antineutrinos produced by fission-reactor fuel rods.

Unstable atomic nuclei with an excess of protons may undergo β+ decay, also called positron decay, where a proton is converted into a neutron, a positron, and an electron neutrino:

Interaction with other matter 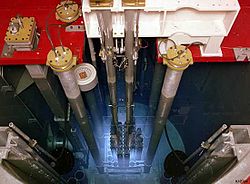 Of the three common types of radiation given off by radioactive materials, alpha, beta and gamma, beta has the medium penetrating power and the medium ionising power. Although the beta particles given off by different radioactive materials vary in energy, most beta particles can be stopped by a few millimeters of aluminium. Being composed of charged particles, beta radiation is more strongly ionising than gamma radiation. When passing through matter, a beta particle is decelerated by electromagnetic interactions and may give off bremsstrahlung x-rays.

In water, beta radiation from many nuclear fission products typically exceeds the speed of light in that material (which is 75% that of light in vacuum),[2] and thus generates blue Cherenkov radiation when it passes through water. The intense beta radiation from the fuel rods of pool-type reactors can thus be visualized through the transparent water that covers and shields the reactor (see illustration at right).

The ionising or excitation effects of beta particles on matter are the fundamental processes by which radiometric detection instruments detect and measure beta radiation. The ionisation of gas is used in ion chambers and Geiger-Muller counters, and the excitation of scintillators is used in scintillation counters.

Beta particles can be used to treat health conditions such as eye and bone cancer and are also used as tracers. Strontium-90 is the material most commonly used to produce beta particles.

Beta particles are also used in quality control to test the thickness of an item, such as paper, coming through a system of rollers. Some of the beta radiation is absorbed while passing through the product. If the product is made too thick or thin, a correspondingly different amount of radiation will be absorbed. A computer program monitoring the quality of the manufactured paper will then move the rollers to change the thickness of the final product.

An illumination device called a betalight contains tritium and a phosphor. As tritium decays, it emits beta particles; these strike the phosphor, causing the phosphor to give off photons, much like the cathode ray tube in a television. The illumination requires no external power, and will continue as long as the tritium exists (and the phosphors do not themselves chemically change); the amount of light produced will drop to half its original value in 12.32 years, the half-life of tritium.

Beta-plus (or positron) decay of a radioactive tracer isotope is the source of the positrons used in positron emission tomography (PET scan).

Henri Becquerel, while experimenting with fluorescence, accidentally found out that uranium exposed a photographic plate, wrapped with black paper, with some unknown radiation that could not be turned off like X-rays.

In 1900, Becquerel measured the mass-to-charge ratio (m/e) for beta particles by the method of J.J. Thomson used to study cathode rays and identify the electron. He found that e/m for a beta particle is the same as for Thomson’s electron, and therefore suggested that the beta particle is in fact an electron.

Beta particles are able to penetrate living matter to a certain extent and can change the structure of struck molecules. In most cases, such change can be considered to be damage, with results possibly as severe as cancer or death. If the struck molecule is DNA, it can cause spontaneous mutation.

Beta sources can be used in radiation therapy to kill cancer cells.