The Big Ten Network (BTN) is an American regional sports network that is owned as a joint venture between the Big Ten Conference (which owns 49% of the network) and the Fox Entertainment Group subsidiary of 21st Century Fox (which owns a controlling 51% interest), and is operated by Fox Sports. It is the first internationally distributed network dedicated to covering a single collegiate athletic conference. Dedicated to sports and other programming from the Big Ten, the network's lineup includes telecasts of Big Ten events, archived events involving schools in the conference, studio shows, coach's shows, documentaries and other programming related to the conference.

The network reaches approximately 90 million households nationwide, and is available up to an estimated 100 million pay television households in the United States and Canada.[2] It is headquartered in the former Montgomery Ward & Co. Catalog House building at 600 West Chicago Avenue in Chicago, Illinois.[3]

The network's foundation traces back to 2004, following negotiations between the Big Ten and ESPN on an extension of the conference' s broadcast contract with the network. With three years remaining in the existing deal, the conference sought a significant increase in rights fees. ESPN, however, balked, causing Big Ten commissioner Jim Delany to begin exploring the creation of his own network.[6]

The launch of the Big Ten Network was announced on June 21, 2006, as a 20-year joint project between the Big Ten Conference and Fox Entertainment Group.[7] At launch, 51% of the network was originally owned by the conference itself, while Fox owned a minority interest in the network, while also handling its operations. The network was positioned to be the first ever cable channel dedicated to a single collegiate conference.[8] The network also has a commitment to "event equality", stating that it would produce and distribute an equal number of men's and women's events across all platforms, within three years of its launch.[9] The deal was meant to replace the Big Ten's television contract with ESPN's ESPN Plus regional television package. ESPN Plus games were typically only seen on one broadcast television station in a team's local market (for example, the Illinois Fighting Illini aired its games on Champaign, Illinois CBS affiliate WCIA (channel 3)).

Big Ten Network was launched at 8:00 p.m. Eastern Time on August 30, 2007, with Big Ten Tonight as its inaugural program. The network aired its first live telecasts two days later on September 1, which included a football game between Appalachian State and Michigan – the game itself gained national attention for its upset victory; being the first win by a Division I FBS team over a ranked Division I FCS team since Division I was split into two subdivisions by the NCAA in 1978.[10][11] On September 2, the network aired its first women's sports event (a soccer match between Syracuse University and Michigan State) and its first men's non-revenue sports event (a soccer match between UCLA at Indiana).

The new network suffered from limited carriage on its launch, as it was only carried by two major television providers. By the following year, the network had reached its goal to attain carriage on the "extended basic" tiers of cable providers in all Big Ten markets.[12] While no specifics were revealed, Fox increased its stake in the Big Ten Network to 51% in June 2010, acquiring majority control, using a provision in its contract with the conference.[13] In time for the 2011 college football season, the network unveiled a new look (including a new logo and updated on-air appearance), and also introduced a new TV Everywhere service known as "BTN2Go," which offers live streaming of BTN telecasts and other programming through a web browser or mobile app. The service was initially available to subscribers of Time Warner Cable, Charter Communications, DirecTV and Dish Network.[14]

BTN and Dish Network were involved in a dispute leading up to the expiration of the satellite provider's contract with the network in August 2012, a day before that year's college football season began.[15] The network was temporary blacked out for eight days beginning on September 14,[16] giving way to a new agreement that restored BTN on Dish Network on September 22.[17]

Big Ten Network holds national broadcast rights to all of the conference's home football games and televises approximately 35-40 football games each season. Each team is guaranteed to appear a minimum of two times annually on the network, one of which must be a conference game.

Big Ten Network also televises approximately 50-60 regular season women's basketball games annually, along with approximately nine Big Ten Basketball Tournament games. Each Big Ten team appears on the network approximately 8 to 10 times during the season. The network streams dozens of games live on its website, giving Big Ten women’s basketball the most exposure of any conference in the country. The network maintains a set on-site during the Big Ten Men's and Women's Basketball Tournaments in Indianapolis, Indiana with anchors providing coverage and analysis of each day's game action during the event. 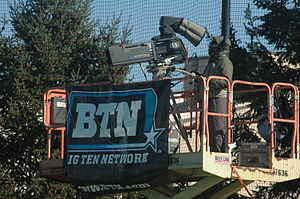 The network began airing men's ice hockey games beginning with the 2013-14 season, the conference's inaugural season of organized hockey, with 27 games as well as the Big Ten Hockey tournament. The network also aired a pre-game and post-game show dedicated to hockey game highlights called BIG TEN Frozen Fridays and the Finale Rush.[19] The Big Ten Network televises more than 170 NCAA-sponsored Olympic events in both men's and women's sports such as hockey, soccer, volleyball, track and field, swimming and diving.

The 720p high definition simulcast of Big Ten Network launched simultaneously with the channel's standard definition feed. In the United States, it is available nationally on satellite providers DirecTV and Dish Network; and regionally on cable providers such as Verizon FiOS, AT&T U-verse, Cablevision, Comcast, Time Warner Cable, Charter Communications, Cox Communications and Mediacom. In Canada, it is available nationally on Shaw Direct and regionally on Shaw Communications, and EastLink. All of its original programs and studio shows are broadcast in HD, as well as nearly all of its sports telecasts and some of its university-produced coaches and campus shows. The channel has produced all of its football games in HD since 2009.[5] In 2011, the network's standard definition feed was converted to a letterboxed format, in line with the conversion to widescreen presentation of programming across Fox's networks.

Big Ten Network On Demand is the network's video on demand service which offers the network's original programming (such as Big Ten Tonight, The Journey, "Big Ten Treasure Hunter",Big Ten Quad and Big Ten Short Stories), original specials, press conferences and highlights specific to each school, as well as magazine and coaches' shows. Content from all 14 schools is available on DirecTV and Dish Network, while cable providers only receive content from the school(s) within their state. Most of the content featured on the service is also offered in HD. The channel's website, www.BigTenNetwork.com, also maintains a large amount of video on demand content for all 14 schools which is available for free streaming.

During the 2009-10 season, Big Ten Network began charging $2.99 per event for its online feeds due to the network's significant financial investment in newer streaming technologies.[22]

On many Saturdays during the football season, the Big Ten Network produces multiple games that air at the same time. The network designates one game as its national game, which is shown on the main channel on satellite providers. The remaining games air on the main channel in the local markets and on the extra overflow channels in the remaining markets. Most cable systems inside the Big Ten's eight states offer these Big Ten Network overflow or "out-of-market" feeds to provide additional football games. All of the additional overflow feeds for the network's various football telecasts are available nationally on DirecTV and Dish Network; and regionally on AT&T U-verse, many Comcast systems, and several other cable providers. Some providers only carry the overflow feeds in standard definition, and providers outside of the U.S. provide them in out-of-market subscription packages.

Carriage negotiations with several major cable providers were stalled for several months due to their interest in placing the channel on a sports tier, with the providers only wanting to charge customers who wanted to subscribe to it; Big Ten Network, however, wanted to providers to carry it on their extended basic tiers so that subscribers would not have to pay an extra fee to receive the network. Comcast, the largest cable provider in the U.S., reached a deal to carry the network on June 19, 2008,[23] and began adding the channel to its systems on August 15, 2008; other major providers in states with universities in the Big Ten Conference (including Charter Communications and Time Warner Cable) would soon follow suit. Additionally, the Big Ten Network is an associate member of the Caribbean Cable Cooperative.[24]

DirecTV and AT&T U-verse were the only major television providers to carry the channel at launch;[25] however, 250 smaller cable systems (including those that are members of the National Cable Television Cooperative) also carried BTN at launch. Dish Network added the channel one week later in early September 2007.[26]

During the late summer and early fall of 2008, several larger cable companies within states where a Big Ten university was located reached agreements to carry Big Ten Network, expanding its carriage to every major cable provider in those areas. On August 23, 2008, Mediacom (which services most of Iowa, including Iowa City, where Big Ten member, the University of Iowa, is located) was reported by Cedar Rapids newspaper The Gazette to have reached an agreement in principle to carry the network according to sources close to negotiations; the deal was officially announced on August 28.[27][28]

On August 25, Time Warner Cable and the Big Ten Network announced in a joint statement that the two parties had reached a carriage deal. Time Warner Cable carries the channel on its expanded basic service in the eight states where Big Ten universities are located.[29][30] These deals were later followed by carriage agreements with Charter Communications on August 26[31] and Cox Communications on August 28.[32] Also on August 26, 2008, The Indianapolis Star reported that Bright House Networks was "very close to a deal" to carry the channel.[33] On September 30, Broadstripe added the channel to its systems in Michigan.[34]

On June 23, 2009, Cablevision added the channel in both standard and high definition to its Optimum systems.[35] The following month on August 25, the network reached a carriage agreement with Atlantic Broadband, which added both the network's standard and high definition feed on September 1, 2009 to its systems in central and northern Pennsylvania.[36] On December 28, 2009, Charter Communications reached an agreement to provide the network to its systems in St. Louis and Southern Illinois on the provider's expanded basic-digital tier.[37]

In September 2008, the Canadian Radio-television and Telecommunications Commission officially approved a request by Shaw Communications to allow carriage of BTN in Canada on its specialty television services. While CTVglobemedia filed a concern that it would illegally compete with its mainstream sports channel TSN, the CRTC determined that Big Ten Network would not harm TSN because of its "very niche" scope.[38] The network became available to Shaw Cable customers on December 3, 2008. The channel became available on Rogers Cable systems in Ontario and New Brunswick on October 22, 2009.[39]

Other channels that show only college sports include: