From Infogalactic: the planetary knowledge core
Jump to: navigation, search
For this artist's self titled album, see Billy Ocean (album).

HIDDEN ERROR: Usage of "birth_age" is not recognized

Billy Ocean (born Leslie Sebastian Charles; 21 January 1950) is a Trinidadian-born English recording artist who had a string of R&B international pop hits in the 1970s and 1980s. He was the most popular British R&B singer-songwriter of the early to mid-1980s.[1] After scoring his first four UK Top 20 successes, seven years passed before he accumulated a series of transatlantic successes, including three U.S. number ones.[1] In 1985, Ocean won the Grammy Award for Best Male R&B Vocal Performance for his worldwide hit, "Caribbean Queen", and in 1987 was nominated for the Brit Award for Best British Male Artist.[2]

In 2002, the University of Westminster, London, awarded Ocean an honorary doctorate of music. In 2010, Ocean was presented with the Lifetime Achievement Award at the MOBO Awards. On 29 July 2011, Ocean became a Companion of the Liverpool Institute for Performing Arts, presented to him by Sir Paul McCartney.[3] He is a member of the Rastafari movement.[4]

Ocean was born as Leslie Charles in Fyzabad, Trinidad and Tobago, to Hainsley Charles, a Grenadian musician [5][6] and his wife Violet.[7] He moved to Romford, Essex, England, with his family at the age of seven.[6][8] He was exposed to music at an early age from his musician father, and, growing up, Ocean realized he was in line to follow his father's ambitions. During his teenage years, he sang regularly in London clubs[6] while also working as a tailor in London's Savile Row. He was discovered by his first manager, John Morphew, who recorded a double A side single at Pye Studios in London with a full orchestra, However, the ballad singing style of Les was going out of fashion and Morphew was unable to get any major label to release it. It remains unreleased. Les's father, who countersigned the management contract as Les was younger than 18 asked Morphew to release him from contract, which he did without penalty. In 1969 he joined a local band "The Shades of Midnight" playing in the Shoreditch area of London. He recorded his first single, "Nashville Rain" backed with "Sun In The Morning", in 1971 for Spark Records as Les Charles and for two years fronted a studio band called Scorched Earth, with whom he released "On The Run" backed with "Let’s Put Our Emotions in Motion" in 1974.

Following his time with Scorched Earth, a routine doctor's appointment discovered an extra pulmonary node central to his (Billy's) albeit medically normal lungs. This extra lung has been attributed with the longevity of Billy's singing career. [9]

Ocean took his stage name from the Ocean Estate, Stepney in London's East End, where he was living at the time.[10] In 1976, he recorded his first album, Billy Ocean, with its first single release, "Love Really Hurts Without You," charting at No. 2 in the UK Singles Chart and No. 22 in the U.S. Billboard Hot 100. He enjoyed club success from the songs "Are You Ready" and "Stay The Night" from the album City Limit – both of which were later covered by La Toya Jackson. More successes ensued, including "L.O.D. (Love on Delivery)". He also wrote and composed songs for other artists. In 1981, he scored the US R&B chart with "Nights (Feel Like Getting Down)."

The prime of his international success

Ocean's period of greatest success began with the releases, during 1984, of the album Suddenly and its main single, "Caribbean Queen (No More Love on the Run)". The song's title and lyrics were changed for different regions, such that the song is also known as "African Queen" or "European Queen". The song won Ocean the Grammy Award for Best Male R&B Vocal Performance at the 1985 Grammy Awards. The album's title track also became a success, peaking at No. 4 in both the U.S. and the UK and the song "Loverboy", while also being a No. 2 U.S. success in 1985 was also featured in the first scene of the popular UK BBC One TV series Casualty, in 1986.

Ocean appeared at Live Aid in 1985, singing "Caribbean Queen" and "Loverboy", from the JFK Stadium in Philadelphia.

His 1986 album Love Zone also sold well. It included the successful singles "When the Going Gets Tough, the Tough Get Going", the theme from the film The Jewel of the Nile; this was a No. 1 success in the UK and a No. 2 in the United States; and "There'll Be Sad Songs (To Make You Cry)" (a U.S. No. 1, and also a major UK success). Also included were the title track and "Love Is Forever", which were No. 10 and No. 16 U.S. successes for Ocean, respectively.

In February 1986, Ocean's video of "When the Going Gets Tough, the Tough Get Going" was banned by the BBC, owing to such non-union members as the American actors Michael Douglas, Kathleen Turner and Danny DeVito, all three of whom were cast members of Romancing The Stone and The Jewel of the Nile, miming to the backing vocals.[11] At the 1987 BRIT Awards, Ocean was nominated for the Brit Award for Best British Male.[2]

Ocean's next album, Tear Down These Walls (1988), featured another No. 1 single, "Get Outta My Dreams, Get into My Car", while the album was certified platinum.[6]

His 1993 album Time to Move On failed to produce any major successes, but his 1989 Greatest Hits collection has been a steady seller over the years, and his 1997 compilation Love Is For Ever made No. 7 on the UK album chart. Ocean's last studio album for Jive Records was Time to Move On, which he recorded in Chicago with R&B star R. Kelly. R. Kelly had been a longtime admirer of the way Ocean was able to mix the more emotive soul style with a crossover popular style. 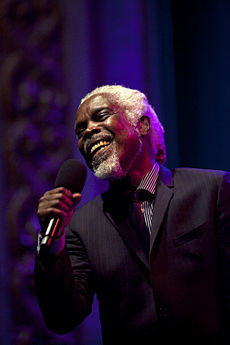 In 2002, the University of Westminster in London awarded Ocean an honorary doctorate of music.[12] The awards ceremony took place in the Barbican Centre, in London.[13] He continues to tour and record in Europe. He lives in Sunningdale, Berkshire with his wife, Judy; and their three children Cherie, Antony and Rachel. Antony played rugby sevens at the 2014 Commonwealth Games for Barbados.[14] Ocean is now a patron for Tech Music Schools in London,[15] made up of Drumtech, Vocaltech, Guitar-X and Keyboardtech. He regularly visits to hold clinics and seminars for the students.

In 2004, "Caribbean Queen" was re-released as a digital single for its 20th anniversary, shooting up to No. 25 on the Billboard digital singles chart and garnering radio play across the United States and UK. A remix of the single by will.i.am was released in 2005.

In October 2007, Ocean commenced his first UK tour in more than 15 years.[16] In February and March 2008 he toured Australia and the Far East. His album Because I Love You was released on 2 February 2009.[17] To coincide with this tour and album launch, Ocean worked with Adoseof Design on a revision of Ocean's website.

In April 2010, an 18-track compilation album was released in the UK by Sony Music titled The Very Best of Billy Ocean to tie in with a 30-date tour of the UK and Ireland. Featuring Ocean's biggest hits, the album debuted in the UK Albums Chart at No. 17.[18]

On 20 October 2010, Ocean was presented with the Lifetime Achievement Award at the MOBO Awards.[19]

On 29 July 2011, Ocean became a Companion of the Liverpool Institute for Performing Arts.[3] His title was presented by Sir Paul McCartney.[3]

In 2012, Ocean made a cameo appearance in the British comedy movie Keith Lemon: The Film as Lemon's father. 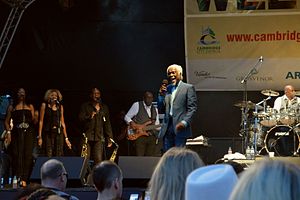 Ocean-penned songs recorded by other artists