The Biobío River (also known as Bío Bío[2] or Bio-Bio[3][4]) is the second largest river in Chile. It originates from Icalma and Galletué lakes in the Andes and flows 380 km to the Gulf of Arauco on the Pacific Ocean.

The major tributaries of the river are the Malleco and the Laja. The river is Chile's second-longest river (the longest being Loa River) and Biobío basin is Chile's third largest watershed, after Loa and Baker basins. The river is also the widest river in Chile, with an average width of 1 km. In the Metropolitan area of Concepción, the river is crossed by four bridges: Biobío Railroad Bridge (1889), Biobío Bridge (1942), Juan Pablo II Bridge (1973) and Llacolén Bridge (2000). 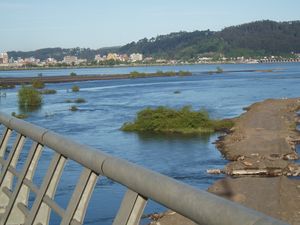 The Biobío at Concepción close to where it meets the sea

The Biobío river originates at the east shore of Galletué Lake. The river flows east for a few kilometers to the point where it receives the waters of the near Icalma Lake, through a short stream. Then, it turns its course northwestward, meandering through a broad Andean valley and receiving the discharges from some minor tributaries, as are the Lonquimay and the Rahue. The Lonquimay is fed by some glaciers of Sierra Nevada and passes close to the town of the same name. Just downstream from the confluence with the Rahue, the upper course of the river, locally known as Alto Bío Bío, begins to run rapidly through a narrow valley surrounded by mountains with slopes more and more abrupt as the river run to lower elevations. Then the river, along the lower course of its tributaries in this area, is impounded by Ralco Dam. Below the dam, the river skirts a southwestern spur of Callaqui volcano before falling into Pangue Reservoir.

After reaching the Intermediate Depression, the river flows through a predominantly flat area, being joined by the Duqueco and Bureo Rivers, increasing its width between 60 and 120 meters and reducing its speed, which allows the navigation in some zones. In the middle course, the Vergara River joins the Biobío in the vicinity of Nacimiento, draining a great part of southern river basin after receiving the waters of the rivers Malleco, Renaico and Rahue Rivers, which constitute a northwest-oriented and parallel network of drainage to the Biobío of a great part of the northern Andean portion of the Araucanía Region.

To the east of Chilean Coastal Range, near the cities of San Rosendo and La Laja, Biobío River is joined by the Laja River, its major tributary in terms of volume of water. From here, the river follows its course increasing its width considerably, reaching 2 km wide at its mouth on Pacific Ocean, near San Pedro de la Paz, Gran Concepción.[5] Along the way the Quilacoya River joins the Biobío River on its north bank nine kilometers above the town of Hualqui.

The name "Biobío" comes from Mapudungun, the Mapuche language. The Biobío was the traditional borderline, or "La Frontera", during the later part of the War of Arauco between La Araucanía, the southern Mapuche self-ruled areas and northern Spanish-ruled Kingdom of Chile. The territory south of the river was not incorporated into the Chilean state until the 1880s after the campaigns of the "Pacification of Araucanía".

The river was once navigable by ship up to the city of Nacimiento. However, over-logging during the twentieth century led to heavy erosion that choked the river with silt and rendered it impassable to ship traffic.

In the early 1980s it was renowned as being one of world's best whitewater rafting venues with a trip that lasted seven days through some of Chile's wilderness areas. Endesa, the Chilean state-run power company at that time, constructed the Pangue Dam, despite strong protests by environmentalists. With the loss of the whitewater rafting venue, there was also the displacement of indigenous Pehuenche people, who had lived in the area for centuries.