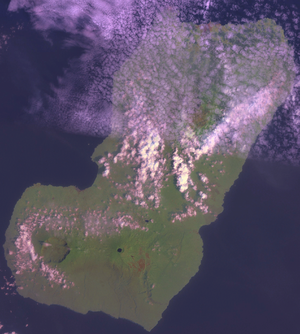 View of Bioko from satellite 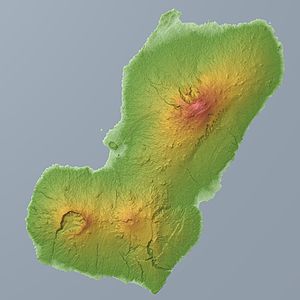 Bioko (also spelled Bioco, in Europe traditionally called Fernando Pó from the period of Portuguese colonization) is an island 32 km off the west coast of Africa, and is the northernmost part of Equatorial Guinea. Its population was 334,463 at the 2015 Census[2] (preliminary results) and it covers an area of 2,017 km2 (779 sq mi). The island is located off Cameroon, in the Bight of Bonny portion of the Gulf of Guinea. Its geology is volcanic; its highest peak is the Pico Basile at 3,012 m (9,882 ft).

Bioko used to be the end of a peninsula attached to the mainland in what is now Cameroon, but it was cut off when sea levels rose 10,000 years ago at the end of the last ice age.[3]

The island has a population of 334,463 inhabitants (2015 Census).[4] Its historic indigenous tribe was Bubi people, but they have long since become a minority. They were outnumbered by workers imported from Río Muni, Nigeria, Liberia and Cameroon. The rest of the population are Fernandinos, Spaniards, and immigrants.

The island was inhabited in the middle of the first millennium BC by Bantu tribes from the mainland, who formed the Bubi ethnic group. Unlike other islands in the area, Bioko had an indigenous African population. The Bubi speak a Bantu language. The island was probably inhabited by this or other Bantu-speaking groups since before the 7th century BC.

In 1472, the Portuguese navigator Fernão do Pó was the first European to "visit" the island. He named it Formosa Flora ('Beautiful Flower'). In 1494 it was renamed Fernando Pó in his honor after being claimed as a colony by the Portuguese. The Portuguese developed the island for sugarcane crops, and while considered poor quality, the refineries' output was such that Fernando Po sugar briefly dominated the trade centres in Europe.

In 1642, the Dutch East India Company established trade bases on the island without Portuguese consent. It temporarily centralized from there its slave trade in the Gulf of Guinea. The Portuguese appeared again on the island in 1648, replacing the Dutch Company with one of their own, also dedicated to slave trading and established in its neighbour island Corisco.

Parallel with this establishment, the Bubi clans began the slow process of establishing the core of a new kingdom on the island, especially after the activity of some local chiefs such as Molambo (approx. 1700–1760). During a period when enslavement was increasing in the region, local clans abandoned their coastal settlements and settled in the safer hinterland.

File:Limbe view with Bioko.jpg
Bioko in the distance from Limbe, Cameroon

Under the 1778 Treaty of El Pardo, Portugal ceded Fernando Po, Annobón, and the Guinea coast, Rio Muni, to Spain, together forming modern Equatorial Guinea. The treaty was signed by Queen Mary I of Portugal and King Charles III of Spain, in exchange for territory on the American continent. Spain mounted an expedition to Fernando Po, led by the Conde de Argelejos, who stayed for four months. In October 1778, Spain installed a governor on the island who stayed until 1780, when the Spanish mission left the island.

Chief Molambo was succeeded by another local leader, Lorite (1760–1810), who was succeeded by Lopoa (1810–1842). After abolishing the British Atlantic slave trade, from 1827 to 1843 the British leased bases at Port Clarence (modern Malabo) and San Carlos for anti-slavery patrols. The settlement at Port Clarence (named after the Duke of Clarence) was constructed under the supervision of William Fitzwilliam Owen. He had previously mapped most of the coasts of Africa and was a zealous anti-slaver. During his three-year command, his forces detained 20 ships and liberated 2,500 slaves. The Court of Mixed Commission was moved from Freetown, Sierra Leone to Clarence to hasten the legal process of emancipating slaves liberated from slave ships.[5]

In March 1843, Juan José Lerena planted the Spanish flag in Malabo, starting the decline of British influence on the island. Spain revoked the British lease in 1855.[6] Madabita (1842–1860) and Sepoko (1860–1875) were principal local chiefs during the period when Spain re-established its control of the island. This period was also marked by Spain's transport deportation here of several hundred Afro-Cubans, as well as tens of Spanish scholars and politicians considered politically undesirable. In addition Spain exiled 218 rebels here from Philippine Revolution, of whom only 94 survived for long.[7]:539

In 1923–1930, the League of Nations investigated the transportation of contract migrant labour between Liberia and the Spanish colony of Fernando Po. Although the League concentrated its attention on arrangements in Liberia, a closer examination revealed that labour abuse arose from conditions on Fernando Po. In the last quarter of the 19th century, Krio planters on the island had shifted from palm oil trading to cocoa cultivation. Their dependence on migrant labour and increasing competition with Europeans resulted in an economic crisis in the first years of the twentieth century. Planters detained labour but failed to pay their contracts, resulting in a situation of de facto slavery. Liberia prohibited labor traders from contracting with their citizens.

During the Nigerian civil war in the 20th century, relief agencies used the island as a base for flights into Biafra.

Given the numerous ethnic groups and peoples who operated on Bioko, a creole language developed, known as Pichi. It is based on English grammar, from the period when the British operated bases for their forces. It also incorporates West African languages from Nigeria and Liberia, as well as the Krio language that had developed in Sierra Leone. Workers came from all these areas in the 19th through much of the 20th century.

Spanish has been an official language since 1844, when Spain took control of the island. It is still the language of education and administration, related to the more than 100 years as a Spanish colony. 67.6% of Equatorial Guineans can speak Spanish, especially those living in the capital, Malabo, on Bioko.[8] 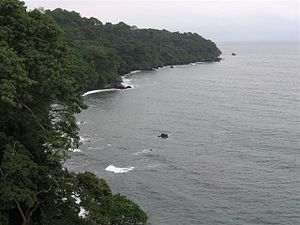 Malabo is the capital city of Equatorial Guinea and the largest city on the island. The island is mostly covered by tropical rainforest.

Located on Punta Europa, west of Malabo, the Alba Gas Plant processes natural gas delivered from offshore production wells. The plant is operated by Marathon Oil Company through its subsidiary, Marathon Equatorial Guinea Production Limited (MEGPL). The plant produces natural gas liquids (NGL) including propane, butane, and condensate products. The majority of the residue gas from the Alba plant is delivered to a natural gas liquefaction plant operated by EG LNG. A portion of the Alba plant residue is also delivered to the Atlantic Methanol Production Company (AMPCO) and is used to produce methanol. The products from all three plants are loaded onto ocean-going tanker ships for export.